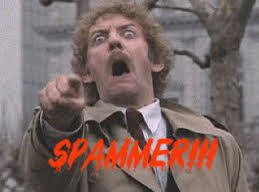 Yesterday I had a new commenter who I must have hit a nerve with one of my posts. Some of you probably know what I’m talking about. He or she comments IN ALL CAPS, says their keyboard is stuck but I don’t believe it. This person proceeded to comment all day, saying pretty much the same thing over and over. The comments were poorly written and made little sense. He or she implied that I was stupid because I didn’t understand what they were saying. I doubt anyone else did, though.

Now I’m a pretty tolerant person, and usually allow comments that don’t agree with my posts, even to the point where the comments become trollish. I find it hard to say “NO” and not approve or delete comments that constitute as troll posts or spam. Setting good boundaries has always been a problem for me. But at this point, I feel like this site is being violated, and these continuous unreadable comments are flooding my inbox and this blog.

For awhile I stopped replying or “Liking” these nonstop comments but continued to approve them (“don’t feed the trolls”), but that didn’t stop them from coming. Whoever this is seems to be on some sort of crusade–for what, I’m not sure. It doesn’t matter. I had about eight more of these comments waiting for me this morning. Finally I replied saying that if they continued I was going to have to delete them, because they are distracting to the main content of this board and could run off my regular readers.

I apologize to the rest of my visitors who may have been put off by this spammer or afraid to comment themselves. I need to work on setting firmer boundaries, and I’m starting right here, right now. NO MORE OF THESE ALL CAPS SPAM COMMENTS will be approved. To you, SPAMMER, go spew your badly written vitriol somewhere else.

I thought I had my lack of motivation all figured out, and thought I’d conquered it, but obviously I haven’t, since I’ve been posting a lot less than I used to and it hasn’t gotten any better. I can’t figure out my lack of motivation, because I love writing and blogging has brought me so much insight into myself and my place in the world, and even moments of joy.

I was all set to write up a new post last night (albeit, not a long one). Whenever I start a new blogging session, I always check my comments first. Lately I don’t seem to be getting as many. I have more viewers and hits overall than ever before, but fewer people are commenting. I’m not sure why. I don’t know if this is something to worry about or not. Maybe it’s silly, but I wonder sometimes if people are put off by my frankness and occasionally unpopular opinions. Obviously, they’re reading, and I do know some people appreciate my frankness, so I guess I shouldn’t worry. I know one of my most frequent commenters (who was actually my #1 commenter for awhile) is busy writing a book right now (and also hasn’t been feeling well) and even Opinionated Man doesn’t seem to be getting as many comments these days, so maybe it’s not just me. Maybe it’s just my stupid narcissism making everything all about me and taking everything personally. Maybe it’s just because I’m posting less, duh.

So anyway, last night I was going to write something about covert narcissism and avoidant personality disorder and whether or not they might actually be the same thing. After all, covert narcissism isn’t recognized as a real disorder but AvPD is. I’ll probably still write that article but I do find lately I’ve been veering away from the topic of narcissism and this blog is becoming more of a general interest blog.

I opened up my laptop, and as is my habit, checked my comment folder before starting to write. And the first comment I saw was a very trollish comment which I won’t bother quoting because of how hateful it was. I sent the comment to Trash anyway. The comment wasn’t merely critical (I’ll still approve those and usually respond to them in some way); it was an attack on my character because of an article I posted MONTHS ago. The writer of the comment objected to what she or he felt was my being too soft on narcissists. Bible verses were used to fuel their rage and personal attack on me.

I hate that. I can take criticism if it’s constructive, but can’t stand judgmental people, and I especially can’t stand people who use religion as an excuse to act like assholes. The Bible is wonderful, but so many people these days use it to back up unacceptable behavior, as if this is their holy mission and right. It’s very narcissistic. Churches are filled with narcissists who used scripture as a way to intimidate those they disagree with, so they don’t have to take any responsibility for their cruel and vicious personal attacks. The Internet is full of them too. I can’t say whether or not this person is a narcissist, but their behavior displayed splitting and black and white thinking, and the “us versus them” mindset so prevalent today. Of course, to this person, I’m one of “them.” What they’re doing has a name: religious abuse.

I know I shouldn’t have taken the comment personally. I know that as a blogger who focuses on a sensitive issue, angering people sometimes can’t be avoided. People are sometimes going to disagree with you. You are going to have haters and trolls, especially if your blog becomes widely read, as this one has. It comes with the territory. I know many people read this blog and get a lot out of it, and still get far more positive comments than negative ones, so why I am allowing one stupid negative comment to intimidate me enough to make me not want to post? But that’s exactly what happened: I decided not to post anything at all last night because of that stupid comment. I said to myself, “I’m over this. I don’t want to deal with these haters anymore. I don’t think I should even blog about narcissism anymore.” It’s true that I have been focusing less on narcissism because I feel like I’ve pretty much said everything there is to say about it already. But I allowed this one comment to destroy my motivation to write about anything at all!

I have a message for that commenter should they read this: I don’t care what you have to say. You’re a bully and a jerk. This is MY blog, and if you don’t like it, don’t read it! Go read something you agree with instead. It’s my blog, and I can write about whatever I want and you have no right to dictate to me what I can and can’t say. You may have a valid point in your opinion and the right to express it, but you have no right to personally attack me. I’m going to continue to write honestly about what I feel, not to please you. You do not intimidate me and neither do the Bible verses you spout to make it seem like you’re on a personal mission from God when in fact your behavior is itself very narcissistic. But thank you for giving me an idea for a new article.

I love blogging and don’t want to ever stop. I’m not going to let one judgmental malcontent ruin my motivation or put a damper on what I love to do. It took me too long to get to where I am. I’ve allowed myself to be intimidated by people like that for my whole life, and it’s a big part of why I never achieved much of anything and always doubted myself and eventually gave up anything I ever undertook. 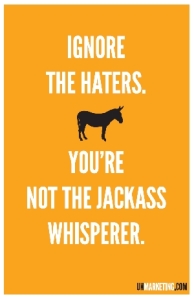 I shouldn’t let one mean-spirited, sarcastic comment from a troll (even if there was a grain of truth on what they said) make me set a post to private. This person isn’t even a regular commenter here; they came out of nowhere. Instead, I should listen to the above advice.

The day I start censoring myself for fear of offending someone is the day I might as well take this blog down and retreat back into the prison of silence I came from.

I’ll probably put that post back up after I have a couple of friends read it first and give me their honest opinions. I don’t trust my own judgment sometimes.

Yes, trolls can be good for your ego! I sure needed this today. Thanks, OM!