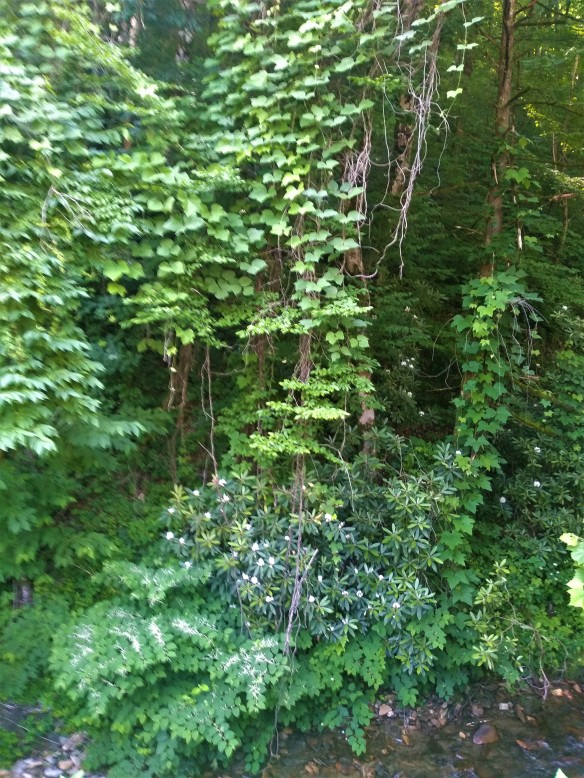 Closeup of kudzu and a few other native plants

I love Kudzu, an invasive vine common in the southeastern United States (but due to global warming, it now can be found in the Middle Atlantic states and even the northeast as far north as Massachusetts).  It grows most prolifically in the South, however.  Kudzu has even been dubbed “the vine that ate the South” due to its unfortunate tendency to “grab” hold of other plants and trees, and eventually cover them so completely they can no longer obtain sunlight and die.  It has been known to take down telephone wires and destroy property.

Chinese or Japanese Arrowroot (kudzu’s actual name) was brought to the United States from China (where it is not invasive) as an ornamental plant and a method of stopping soil erosion in the late 1800s.  But because in the United States, it had no natural enemies or feeding animals to keep its growth in check, the vine quickly took over cultivated gardens like a vegetable cancer and could even destroy property.   Today it is considered a weed because of its invasive and destructive tendencies.

In spite of its terrible reputation, kudzu is beautiful.  It produces lovely purple flowers and has big green heart shaped leaves.  In the southern states, where it is ubiquitous, you can sometimes see entire fields or groves of trees along the sides of roads covered by it. Although the smothered trees are likely doomed, the resulting rounded, domed shapes can give the scenery an otherwordly, eerie, even sinister appearance.

All pictures were taken by me in the Nantahala National Forest, Nantahala, NC. 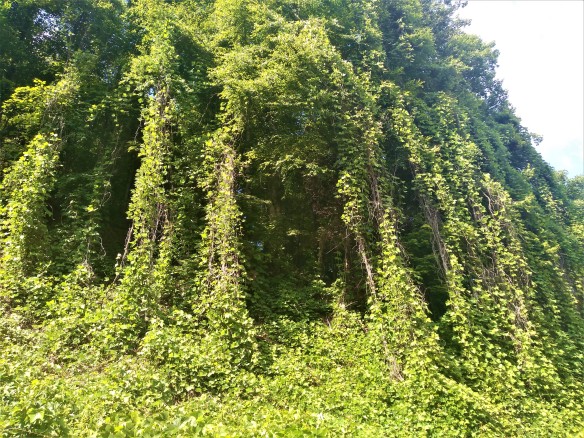 An opening in the kudzu