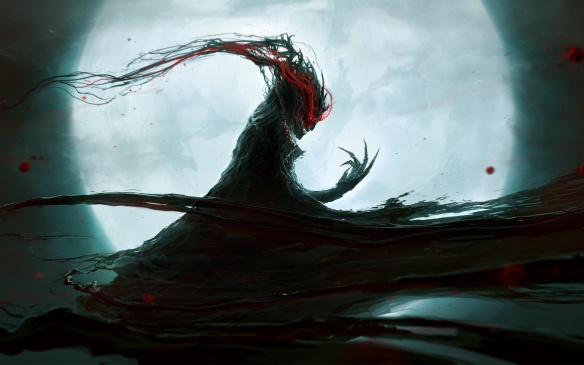 I usually avoid topics like this, because of their obvious religious implications.   I try to avoid getting too religious on this blog, but I must write about it because I’ve been thinking about this topic all day and I won’t rest until I do.    I’m going to try to stay away from religious terminology though.

A young man I know on another site who insists he has NPD (but has no official diagnosis and therefore may not be one) says he can remember when he “chose” to be a narcissist, and now wishes he hadn’t. He’s adamant that it’s too late to change and nothing can be done.   He said he felt as if his false self was “installed” and didn’t actually come from himself at all.

His story got me thinking.  What if narcissism really is a form of possession?  (I hesitate to use the term “demonic,” although it could be).  What if it’s a kind of choice that’s made and that once it’s made, an outside spirit or entity or whatever it is, lets itself in and it begins to obliterate the true self?

We know that people with NPD have a false self, and we know it’s a lie whose purpose is to hide the true self even from the person themselves, to the point that they believe the lie and actually believe the false self is who they really are. But where exactly does this false self come from? How does a child know how to build such an elaborate defense mechanism that works nearly the same from one narcissist to the next? It’s like there’s a rule book that all narcissists follow.   How can that be?   Are they of a hive mind?  Or is it something else entirely?

Installation of the false self.

Let’s imagine this false self is actually not something  you constructed as a defense mechanism to escape from your true self and bury your pain for good. Let’s imagine something else–that it’s something from outside of you, something that’s been installed. Call it demonic possession, if you wish–that’s probably the closest thing we can imagine to what I’m describing.  The false self isn’t created by you because it never was a part of you–it’s probably not even something human. It was installed there at a time when you think you needed it, most often when you were very young and defenseless and were faced with this yawning, vast, terrifying emptiness caused by not being validated, mirrored and loved when you needed it most. A young child or toddler who feels rejected has not yet learned to separate themselves from the parents, usually the mother–so the rejection feels like an annihilation. It feels like you are dying.

At that moment, when you feel this unbearable reality–because it’s real to you even though it isn’t actually real–of being snuffed out of existence–this entity comes along, an entity who promises something better, a way out, a way to feel “alive” again. M. Scott Peck talked about this in his book “People of the Lie.”   The entity lies to you and tells you your life will be much easier and you can get rid of that awful feeling of emptiness if only you let it in.   It doesn’t tell you what it’s really going to be doing to you is destroying your soul and the souls of others by proxy.

There’s only one catch–in order to keep working, the entity must feed off the emotions of others, because when it takes over you, it pushes down your own emotions so you can’t feel them anymore. It obscures your pain and emptiness so you don’t have to feel those emotions, but it throws out the baby with the bathwater: it also obscures any sublime emotions like love, empathy, joy, sadness, and gratitude. If other people aren’t available for this thing to feed off of, the entity will starve and you are back to where you started–feeling like you no longer exist and facing that awful emptiness.

Faced with a choice.

You have a choice–you can invite the entity in or not. It never forces itself on you. You may remember standing at such a crossroads when you were very young. I know I did.  I “test drove” narcissism for awhile, but ultimately rejected it.   Playing with narcissism is like playing with fire.   It’s not something you want to mess with.

If you’re an empath, you probably will reject it and choose to suffer rather than invite it in, because as an empath, you can feel its malignancy and know it will destroy your soul eventually, and the souls of others by proxy. If you reject the invitation, it will go away and leave you alone, but you might develop C-PTSD or BPD or become codependent, and allow yourself to continue to be abused and rejected without any defenses against the pain and emptiness inside.  But your real self remains intact and you don’t have to walk around wearing a mask all the time and hurting others to keep that mask on.

If you’re desperate enough–or can’t sense how evil this thing really is, you will be tempted to say yes and allow it inside. It probably won’t be a conscious choice.  It’s not something you THINK about and then decide, like what shoes you’re going to wear  that day.  It’s a choice made on the spiritual level so even a very young child can do it. It could happen later in childhood, or during adolescence or even early adulthood.  It’s a spiritual version of “if you can’t fight ’em, join ’em.”   An example might be a socially awkward boy who faces a group of sociopathic bullies every day and is given a dare:  set another kid’s house on fire and be accepted by the group, or continue to be bullied.   So he chooses to do what the bullies say, in exchange for acceptance.  What he doesn’t realize is what that does to his soul.  Faced with cognitive dissonance–unbearable guilt over what he did even though it was against everything he believed in–he resolves this by identifying with the bullies and represses his guilt and shame.   Soon his behavior begins to change and he begins to act less socially awkward and even becomes “cool”–but he also starts to act arrogant and entitled.  He no longer accepts blame for his actions and begins to play mind games with others.  He seems more confident–but he’s actually in much worse shape than he started because he isn’t even himself anymore.   He’s a puppet for the evil entity that used the promise of “acceptance” as the carrot on the stick–and now resides inside him and has no intention of leaving.

If narcissism is a form of possession, than narcissists are just puppets being operated by an outside force that is not them.   For awhile at least, the true self is still there, but it’s no longer able to emerge at will because it’s been repressed by a more powerful force that keeps it at bay.

The entity lies to you and you begin to believe those lies.  The biggest lie it tells you is that your false self is your true one, and the true self was a lie. It twists things around so black is white, and up is down and day is night. You don’t even know what’s real anymore, and so a fantasy becomes reality and reality is sent down the river in a tarpaper boat.

The NPD spectrum and perfect and imperfect possession.

If narcissism is a form of possession , it’s still possible for it to run on a kind of spectrum, though not the kind of spectrum referred to in the mental health profession.   In “People of the Lie,” M. Scott Peck talked about “perfect” and “imperfect” possession. Malignant narcissists are perfectly possessed–which basically means that the entity has completely obscured the true self, making it utterly inaccessible, or possibly even destroyed it. Such a person cannot become self aware or even if they somehow become aware of their own narcissism, there’s no desire to change, because there’s nothing left of the true self; if it’s not destroyed, it no longer has a voice and there’s no conscious awareness of its existence.  This is a person who has become evil, but they aren’t inherently evil because they’re no longer who they once were–they have become whatever has taken up residence within them.

Narcissists lower on the spectrum are imperfectly possessed–which means the entity hasn’t completely obscured the true self. Such people are not evil–they are victims of an evil entity that is trying to take control over them. If they have realized what they have become and no longer want it, they become engaged in a kind of spiritual warfare.  You may notice some lower spectrum narcissists can be very changeable, almost Jekyll-and-Hyde-ish.    From time to time their true self will appear, sometimes even without a grave loss of supply. That’s when they may admit they want help and when they’d be most receptive to it.   For non-malignant narcissists who are ego-dystonic, therapy could work, but there MUST be a spiritual component in the therapy itself.   M. Scott Peck believed narcissists (even though he didn’t call them that in his book) who are not perfectly possessed (in other words, not malignant) can be cured by exorcism.  It doesn’t even have to be done by a priest or minister–it can be done by a trained therapist too. Peck described the 2 exorcisms he performed in his book, “Glimpses of the Devil.”

Usually I’m very skeptical about supernatural things.  Although I’m Christian, I tend to be analytical and prefer scientific explanations over religious ones.  I also tend to be very suspicious of people who immediately start talking about God and Satan and quoting the Bible whenever the subject of narcissism comes up.  But it does make sense to me that the false self  is really some kind of malicious entity that presents itself during a crisis and makes all kinds of promises to a child or young adult who feels like they’re about to be snuffed out of existence.     It’s all too easy to be taken in by the lies when you’re desperate, but once the choice is made, the thing has too much power to get rid of without spiritual intervention of some kind.   You can see it in the empty, soulless gaze or unnerving, predatory stare some narcissists have, especially if they’ve crossed the line into malignancy (or perfect possession). And it gets worse over time, which may be one reason why narcissists tend to grow worse with age. Unchecked, whatever this thing is takes over more of your original soul until you become perfectly possessed and your true self is either totally eclipsed or obliterated.  If it’s obliterated, you’re nothing more than a walking dead person–a zombie impersonating someone you never were and feeding off the energy of others.

As much as you might want to, you can’t fix a narcissist.  Don’t even think about it because you have no idea what spiritual dangers you might be taking on–but it’s certainly alright–more than alright–to pray for their deliverance.

52 thoughts on “Is narcissism really a form of possession?”