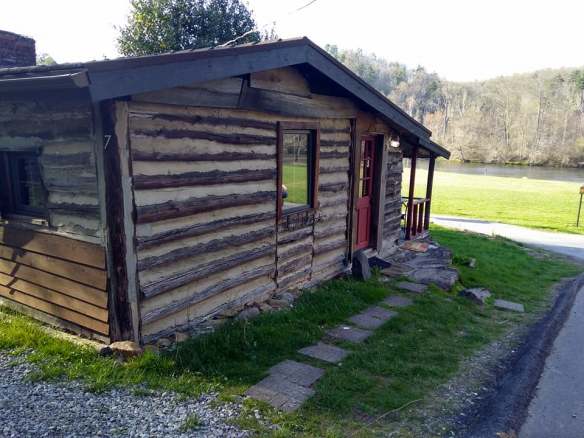 Side view of the Hundred Year Old Cabin, Arden, NC.

Yesterday was my daughter’s birthday, but this year has gone by so fast (and because of the continued cold weather, I was having trouble believing spring had really arrived), so I almost forgot about her birthday. It just sort of snuck up on me.   So I realized yesterday I hadn’t made any plans or gotten her anything.

I stopped by a cupcake shop on the way home and got six different types of cupcakes, then had her pick her favorite one (red velvet cake).  Then I placed a candle on top of it and brought it out to her while we sang happy birthday (I did not get a picture of that but I should have — the cupcakes were adorable and so colorful).

Then I told her I wanted to go for a drive and wanted company.   What I had in mind was a 3 mile trip to some river cabins I’d always been curious to see.     She and her boyfriend joined me, thinking the trip would be boring, but it wasn’t at all!

There are seven adorable rental cabins tucked away in the woods by the river.   Six of them are new, and all perfectly charming (we could actually go inside two of them), but the one that fascinated me the most was the Hundred Year Old Cabin.   We didn’t get to see the inside of it, but it’s very photogenic, as you can see below. 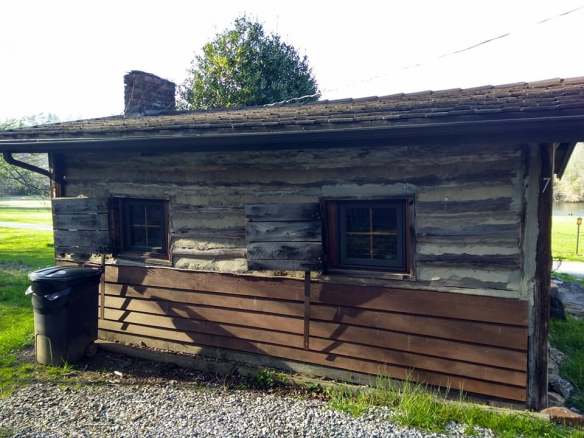 Back view of the Hundred Year Old Cabin 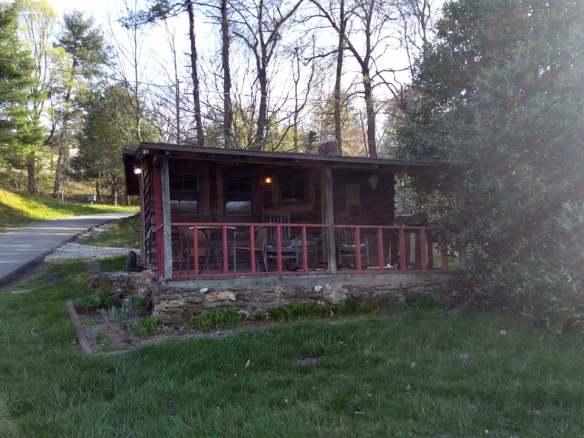 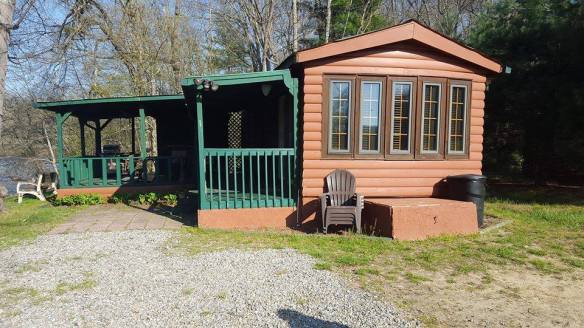 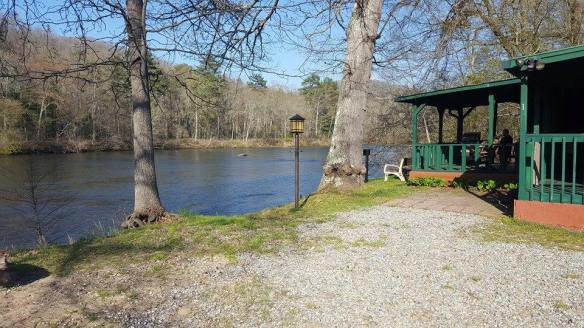 Two photos of one of the newer river cabins.

We got to try out the hammock on one of the cabins closest to the river.   It was a beautiful day, and so relaxing just swinging in it and hearing all the nature sounds.  It was hard to believe I wasn’t on vacation and only a few miles from my home . 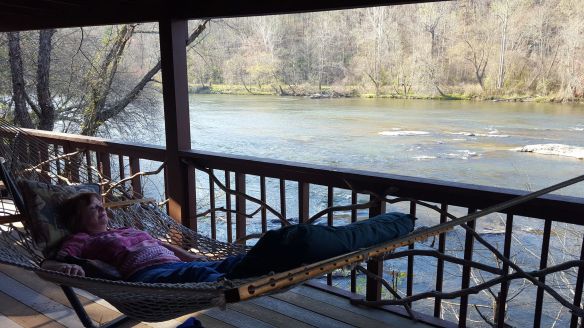 We walked around the campgrounds for a while and took some pictures of the river, then we headed to Panera Bread for her birthday dinner. 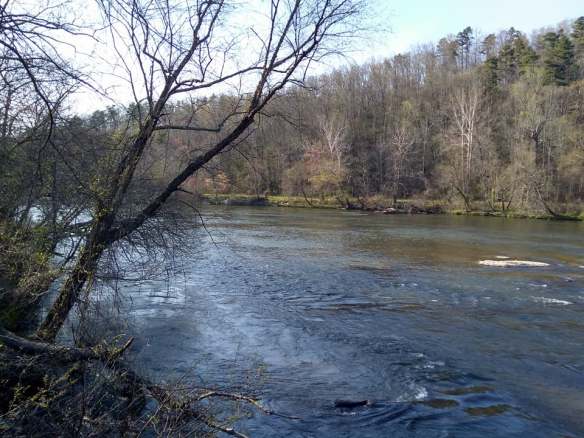 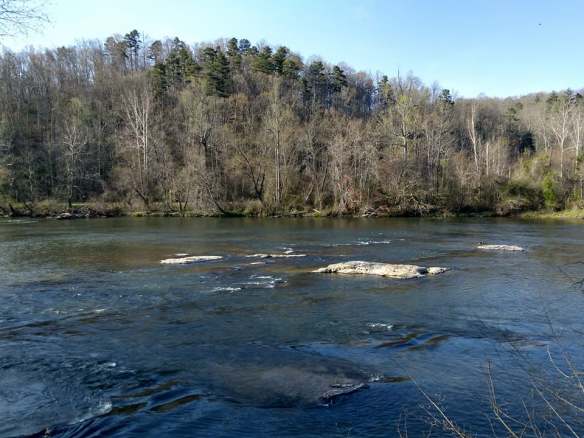 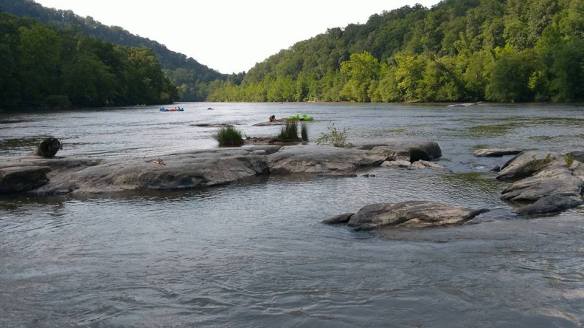 On Friday, I had a day off.  The plan was for me, and my daughter and her friend to go tubing on the French Broad River (yes, that’s it’s actual name).    We started off around 1 PM, parked our car, signed up at Zen Tubing and paid our fees — 3 rented tubes and another one to carry our small cooler.  We also purchased a waterproof box to carry our cell phones.  Then a bunch of us boarded a jitney bus that took us about 3 miles to where we picked up our tubes and headed off. 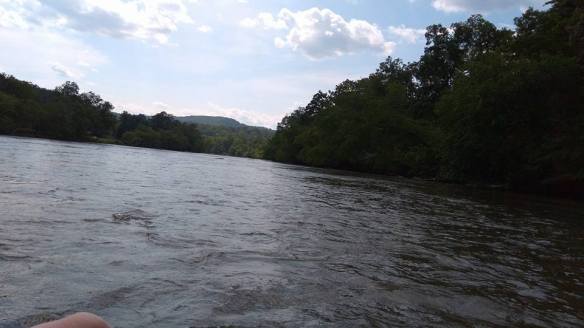 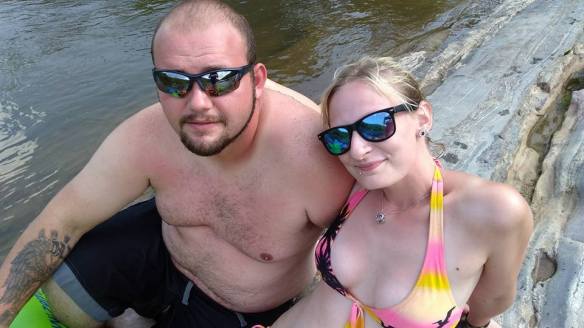 It’s a good thing I decided to buy some cheap water shoes with treads because the rocks as you’re getting in the tubes are very slippery! 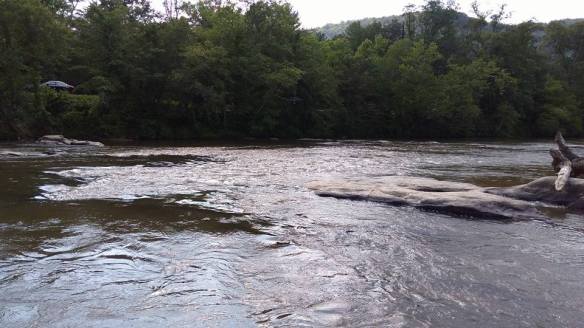 Soon we were on the water.   There were straps where you could attach the tubes so they wouldn’t separate, but at first they kept getting tangled and it seemed like we weren’t moving at all. But we actually were moving, because when I looked back behind us, the boarding point was very far away. 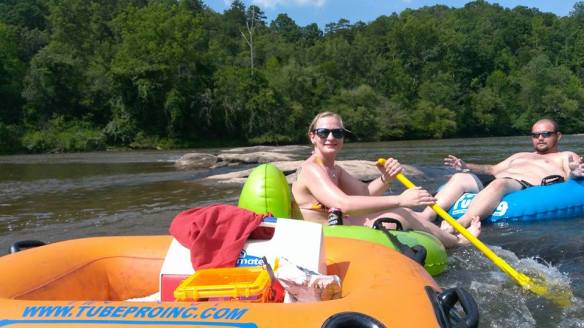 Soon we were in the groove and rolling down the river.   The trip is about 3 miles (back to the rental and sign-up place) and takes about 2 – 2 1/2 hours.    It’s incredibly relaxing and the tubes are comfortable.  Soon I was leaning back in my tube and just taking in the gorgeous scenery all around. 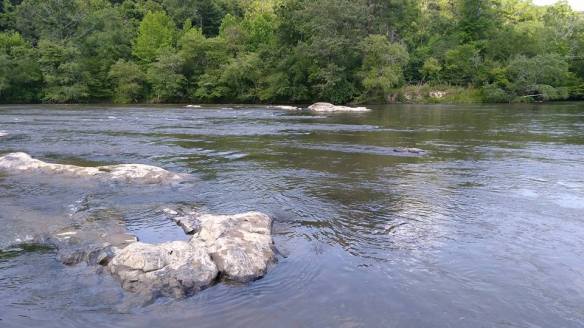 The cold water felt good on my feet as I spashed them in the water.  Blue dragonflies   were everywhere, landing on our tubes, on our cooler, on my body!    A lot of them were mating in mid-air (which I wrote about in my last post).     I should have taken a photo of them but they’d always move before I had the chance.   They did become slightly annoying in some areas, because there were so many. But other than that, the trip was perfect, and so relaxing. 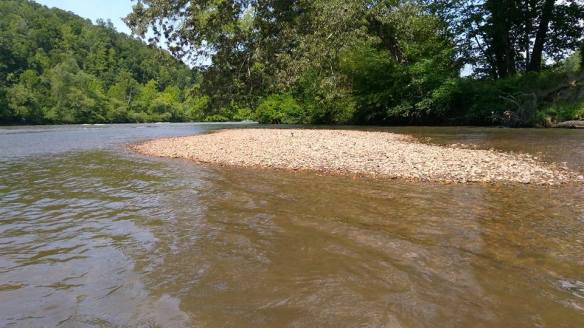 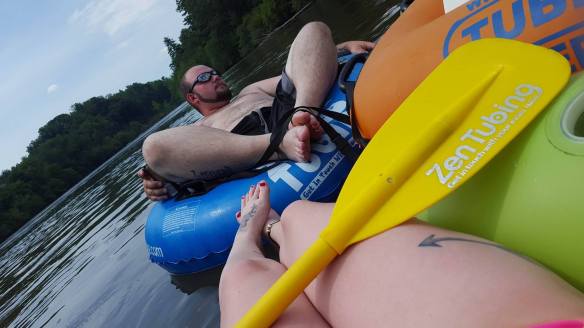 In some areas the slowly moving water became more like rapids, and going over those was a lot of fun.   At one point we got caught on some rocks and my daughter’s friend had to get out of his tube to get us free (the water in the river is surprisingly shallow, and we were told never gets over about 5 feet, even in the middle). 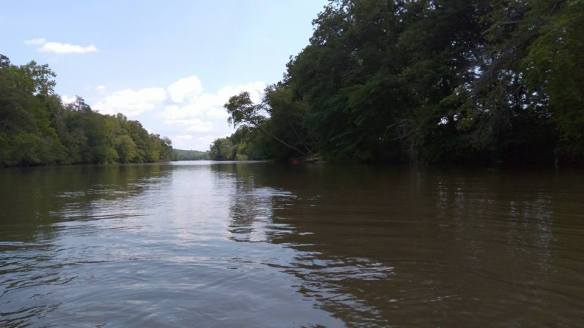 In some areas there were rocks you could sit on, and at one point we did.  We got out of our tubes and climbed up on the rocks (again, they were so slippery I had to put my shoes back on) and took some pictures.   We looked over at the side of the river and saw some kids swinging from a rope into the river and swimming in it (you can see that in the below picture): 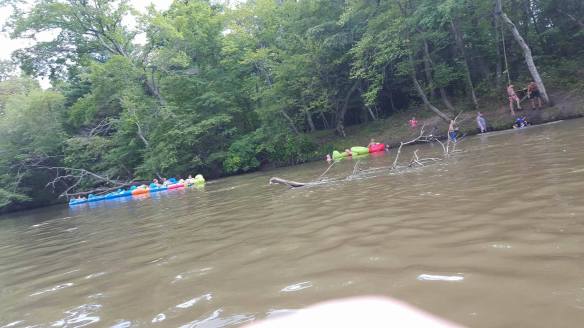 The French Broad isn’t really great to swim in.  I’d heard it’s infected with e-coli, so you definitely don’t want to drink it.  But for tubing or kayaking it’s perfect.

Finally, we reached our destination, and we were all sunburned but I felt so relaxed.   Afterwards, we stopped for ice cream and headed home.  I’ll definitely go tubing again soon.

A mile away, the snow was blowing so hard there was practically no visibility and I thought my car would blow off the road. But here, I caught a couple of photos of the French Broad River on the way home from work just before the snow and wind began to hit. There was still a little patchy sun. 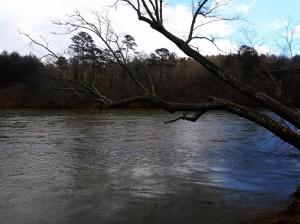