I’d add my own rant, but these four rants pretty much say everything I feel.  Donald Trump aids and abets domestic terrorists and supports Nazis.   There’s no prettier way to say it and besides, we need to call this what it is.    What he is doing is evil, un-American, and totally unacceptable.  How is he still president?

Yes, this GIF has been used on this site before, but can’t have too much of a good thing.

EDITOR’S NOTE: The 45th president of the United States went off the rails today in a vintage Trump racist diatribe that shook America to its core. Shinbone Star staff members quickly reacted to the latest outrage from the 45th president.

The sound and the fury

I have to admit, I’m shaken. I worked in journalism for 36 years, and never, ever have I seen a spectacle to equal 45’s behavior at his Trump Tower press conference today.

The contempt, the hatred in the man’s eyes and in his voice and demeanor. The pure fury when he realized that the press was not going to play his little game, not this time or ever again. 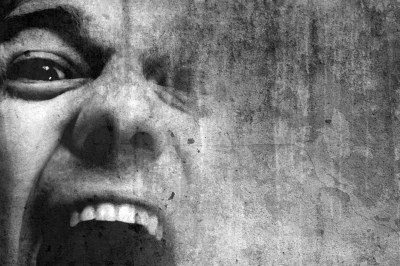 In Trump’s post-PC America, it’s become okay to dehumanize people or groups of people you don’t like. Then they justify it by calling it “straight talk” or “honesty,” which of course it is anything but.

Dehumanization means objectifying a person or group in such a way that it becomes okay to treat them as second class citizens or even resort to abuse or torture.

“Gay people are all abominations.”

The trick is to make the target less than human.  Make them an object and it’s okay to do whatever you want with them.

It works on an individual level too, of course.  Narcissists and sociopaths dehumanize their victims all the time, which has a way of making them “feel better” about the abuse they proceed to dish out.  Serial killers and rapists use it; so do abusive parents and spouses.

“You’re a disgusting waste of air.”

In David Pelzer’s autobiography, A Child Called It, the harrowing story of a boy who was scapegoated by his narcissistic, alcoholic mother until the age of 13 when a sympathetic teacher finally reported the abuse to authorities and he was removed from the home.   Pelzer describes how his mother went so far as to referring to him as an “it” before meting out her horrific “punishments” and abuse.    Making him eat off the floor with the dogs and not recognizing his humanness (by making him a thing, an “it”) was how she was able to justify the horrible things she did to him.

In the larger sphere, hate groups use dehumanization to “feel better” about abusing, ostracizing, torturing, or sometimes even killing members of the groups they target.     The Nazis dehumanized the Jews and others they deemed “unfit” in order to justify their killings and other atrocities. KKK members dehumanize their black victims in a similar manner.  This is how they are able to justify carrying out the crimes they commit.  Dehumanization is also used during wartime, and may in some cases be a necessary evil in order for a combat soldier to psychologically process the massive guilt over having to kill another human being, though I don’t think it ever justifies atrocities done to women and children, or innocent civilians.

We see it more than ever now, since we have a president who regularly dehumanizes and makes negative generalizations against those he doesn’t like, especially at his rallies.   His hostile rhetoric riles up his supporters, who then feel justified to mete out verbal abuse and even violence at Muslims, liberals, reporters, gay people, peaceful protesters, or whatever.

Dehumanization isn’t confined to the right though.  I’ve seen it on the left too.    Both sides are using objectification and dehumanization to justify abusive behavior toward those they disagree with.    It’s a national disease, and it’s contagious.  We are not living in normal times.

I want to share this story a friend of mine told me about a man she met through a dating site.   He sounds like a sociopath to me, but I’m also pretty sure he’s been indoctrinated by his “hero” that this sort of toxic rhetoric is okay.

This new man and I had met on a dating site, and we spent quite a while on the phone getting to know one another, before we met at a fancy French restaurant.

I overlooked one or two overly crude flirtatious comments, as I have a weakness for outgoing, A- type personality men, and we had tasted a lot of wine.

But somehow, at a bar, the subject came around to Trump and Muslims. I was saying that I didn’t like that Trump said we should target their women and children, because they target ours. I could understand that during war, some innocents will be killed – say if a terrorist purposely housed them in his compound, but terrorism doesn’t justify intentional revenge terrorism.

He said, “We should target them, because they’re all cockroaches. Muslims are all coakroaches, and criminal invaders.”

He then went on to call all Mexican illegal immigrants criminal invaders and human coakroaches as well, who by nature of their race, “like blacks”, were disproportionately “more criminal”.  When I compared his remarks to Hitler calling the Jews coakroaches, and said it was racist and fascist to dehumanize whole classes of people, his voice got louder and louder against me, and no one at the bar verbally came to my aid.  He called me an emotional liberal and mocked me, “Wah, wah, wah” as if I was crying while getting up to “walk me to my car.”

Gone was the charming man who had induced me to go out with him, and I had to follow behind him to find my car, while he mocked loudly passers-by for “being fat” and “farting” in his face.  When we were alone in the parking lot, I had had enough and my temper and voice rose in an attempt to stop him from talking over me.  He had said I hadn’t experienced trauma like his because I had never been shot.   I said, “I may not have been shot at, but my own mother attacked me when I was only five years old, and I can tell you one thing:  I would never dehumanize all of humanity by calling the mentally ill, the handicapped, or any human race ‘coakroaches'”.

He said he would have slit my mother’s throat.  I got in my car and got out of there as fast as I could, and reported the incident to the dating site.

This is what we’re up against.  Sociopaths like this man now feel perfectly justified to amp up their abuse and hatred, because of the political times we are living in.