I’ve been doing some reading about psychopathy and have found out some surprising things. I always was a little confused as to how psychopathy differed from sociopathy and have used those terms interchangeably on this blog due to my confusion. I’ve also used the term interchangeably with Antisocial Personality Disorder (ASPD) and sometimes even malignant narcisissm. It turns out it’s probably something completely different from the other three disorders and may not even be a disorder at all!

Before you start laughing, hear me out.

It all started with this colorful, humorous description someone wrote on a forum I’ve been active on, describing how a Psychopath differs from a Narcissist:

When I picture a Psychopath, I think of someone who at bedtime bounces around from one thing to the next, essentially a high-energy, happy person. When I picture a Narc at bedtime, I imagine someone wearing long pajamas and a nightcap (yes, a nightcap), walking around a 19th Century house, holding a candle, checking for ghosts.

At first I thought this was a weird (but funny) analogy. But it really isn’t. According to psychologist Theodore Millon, Primary Psychopathy is something you are born with and is not due to abuse, unlike NPD or ASPD. Studies have shown that the limbic system (emotional center) of primary psychopaths is simply less active than in normal people. So they don’t experience empathy or have a conscience regardless of how they were raised, but they also don’t have very deep emotions in general. 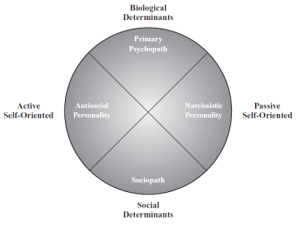 Because they lack deep emotions, primary psychopaths tend to be fearless risk takers. They also aren’t moody because they don’t experience anxiety or depression the way others do–if they experience those states at all. But psychopathy has become associated with sociopathy and/or ASPD or malignant narcissism because a born psychopath may be more prone to developing personality disorders than the normal population, if they are abused. Because they don’t have the capacity to develop a conscience or empathy, if they do develop a personality disorder, it’s likely to be Antisocial Personality Disorder, where the right of others are callously violated. That’s why so many psychopaths are also antisocial and dangerous.

But there is nothing wrong with the cognitive functioning of a psychopath. They are able to learn the difference between right and wrong, and if they do not develop a personality disorder, theoretically they can choose to do what’s right. Only the limbic system is impaired, so any decisions a true psychopath makes are cognitively based. Emotion simply doesn’t play into it at all. They do “whatever works.” They lack a conscience because conscience is emotion- or shame-based, and a psychopath isn’t capable of much emotion in general.

So a primary psychopath can theoretically be a good person who is just extremely unemotional and only uses logic and reason to make decisions. Unlike narcissists, who actually have deep emotions but have turned all their emotions inward toward themselves and require “supply” to bolster their fragile egos, a non-disordered psychopath has no need for supply. They simply don’t care what anyone thinks. What you think is simply not something that even occurs to them. In contrast, a narcissist cares very much what you think and falls apart like wet toilet paper if supply in the form of approval or adoration is not forthcoming.

Primary psychopathy seems analogous to the Myers-Briggs ESTJ (Extroverted/Sensing/Thinking/Judging) personality type. In other words, a psychopath is an outgoing, sensation seeking, hedonistic thinker who happily jumps around from activity to activity like someone jacked up on Red Bull, yet they don’t have ADHD either because the J(udging) aspect means their high level of activity always has a goal or purpose. Such a person would be easily bored (which could also lead to antisocial behavior), never worry about things or experience (or even understand) guilt, and unafraid to try and experience new things. Their lack of emotionality would suit them well for the business world. In fact, people who have become very successful in business tend to score high in psychopathic traits.

While many high level executives do abuse the rights of others and callously close entire departments and treat their employees like so many pieces in a chess game (whatever works, right?), because psychopaths can tell the difference between right and wrong, some will try to do the right thing just the same. The difference is, they are using cognition rather than emotion to back any prosocial decisions.

Looked at this way, primary psychopathy may not be a disorder at all but a personality variation. Of course, the term “psychopathy” has negative connotations because most of us associate it with antisocial criminals, shady con artists, and serial killers. And in fact many of them are, but not all.

Sociopathy differs from primary psychopathy because (according to Millon, above), it’s antisocial behavior that may develop in a person with ASPD or NPD and is always due to abuse somewhere in the person’s past. A primary psychopath can become a sociopath if they become disordered, and that’s where you would find the serial killers and criminals (and these people usually have ASPD). But a sociopath isn’t always (or even usually) a psychopath. Sociopaths who aren’t psychopathic are usually very malignant narcissists (high spectrum NPD + ASPD) or sometimes even Borderlines, and they differ from psychopaths because there is no logic or rational thinking behind their antisocial or destructive behaviors, only unhealthy, toxic emotion. They seem to have no empathy because all their empathy–and most of their other emotions except anger–are turned inward toward themselves. The false self is what they present to others instead of their real emotions. Narcissists have plenty of empathy but it’s all for themselves–that’s why they are prone to wallowing in self pity. A psychopath would never wallow in self pity. They simply don’t care what you think.

Almost a year ago, I wrote this slightly jocular post after I read an article describing covert narcissism. It was the first time I’d actually read anything about it. Even back then, I recognized the symptoms as fitting me like a glove, but was far away from awareness. This slightly humorous, false self-deprecating attitude was typical of a lot of my posts at the time. I think somewhere deep inside though, I knew.

I can’t believe how different everything seems now.

When most people think of narcissism, they think of the public face of narcissism: extraversion, aggression, self-assuredness, grandiosity, vanity, and the need to be admired by others (see “How to Spot a Narcissist“). But as far back as 1938, Harvard psychologist Henry Murray noticed another breed of narcissist among his undergraduates: the covert narcissist. While the “overt” narcissists tended to be aggressive, self-aggrandizing, exploitative, and have extreme delusions of grandeur and a need for attention, “covert” narcissists were more prone to feelings of neglect or belittlement, hypersensitivity, anxiety, and delusions of persecution [I’ve also seen this referred to as “inverted narcissism,” whatever that means].

Um, I’m prone to feelings of neglect or belittlement, am known to be hypersensitive and anxious, and there are times I believe I’m being persecuted…

I think I fall somewhere between “shy” and “introvert.” The “obnoxious” category seems to refer to most narcissists. Whew, guess that clears me.