I’m not going to review the movie “Boogie Nights” here but there’s a scene I want to talk about because of how powerful it is.

“Boogie Nights” is a 1997 film that starred Mark Wahlberg as Dirk Diggler, young man who fled his mother’s abuse and became successful as an adult film star during the late Disco era. The soundtrack consists of disco and dance hits from the late 1970s and early 1980s.

This was actually a very good film, and the acting by his mother (Joanne Gleason) in this scene (set in 1977, when the story begins with Dirk leaving home), is terrific. She is like a lower-middle-class version of Mary Tyler Moore’s character in “Ordinary People.” She shows more “emotion” because of her social class, which doesn’t require her to “stuff” over-the-top emotion, but she’s every bit as malignant as the mother in “Ordinary People,” and Dirk is obviously her scapegoat. She may have BPD rather than NPD, but it really doesn’t matter either way, because sociopathic, soul-murdering behavior like this is possible with either disorder.

Notice the way she gaslights and blame-shifts, while at the same time is freaking out because Dirk is refusing to provide her the supply she needs and is leaving her. This is one of the things that can happen when you inflict injury on a high spectrum, malignant narcissist. Wahlberg’s character is a somatic narcissist himself, but it’s hard to see that in this scene. 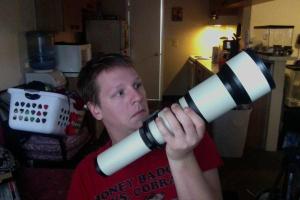 My son with a huge telephoto lens The Parasite sent him.

The Parasite (my ASPD/malignant narc ex) is now giving my son the silent treatment. A few days ago, flush with all his new money, he sent my son a very expensive, professional quality Nikon camera and various photographic accessories. It was nice of him. But there were strings attached: my son was told not to tell me The Parasite got his $31K from the government or tell me about the expensive photographic equipment he received. The Parasite must have known he would tell me though, because my son has always been honest to a fault. He’s honest even when he shouldn’t be.

So my son called the other night and told me, and that’s how I knew. He could tell I was upset even though I was happy that at least he’d bought my son a camera. He then told Parasite that he’d told me, and his father went ballistic, and has now blocked his calls and blocked him on Facebook and told my daughter he doesn’t want to ever speak to him again.

I know it’s temporary; he’s played these narc games before. My son being The Parasite’s second favorite scapegoat (after me), is used to being emotionally abused by his father. Growing up, there wasn’t much I could do to stop it.

But now the wonderful gift my son got is tainted. I know it would bother me a lot to look at a gift given to me by someone who days later blocked me and refused to speak to me just because I was honest. Especially if I was honest to someone I loved as much as my son loves me. The Parasite knows my son prefers me to him (even though my finances limit me to cheap gifts) and that enrages him. It just makes me so sad. I hope he’s still able to enjoy the gift.

On a happier note, my daughter got her engagement ring! I think they have the date set for April 20th (4/20, lol). She will have just turned 23. That’s young, but not too young, and her fiance is 4 years older. This is what she wanted so I’m happy.