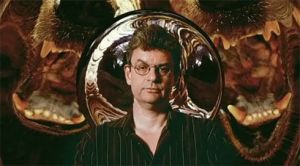 Who in their right mind would want to be a narcissist?

Sam Vaknin evidently does. Vaknin, a self-identified narcissist, is a bit different from the average narcissist. He seems to fit the profile in many ways, but he is surprisingly introspective and in 1997, wrote a self-help book called “Malignant Self-Love: Narcissism Revisited. It can be purchased through Amazon or through his own site, but you can also read free excerpts from the PDF version which is also available through his website.

I have read the PDF full version and while it’s extremely long, verbose, and often repetitive (the published version may have better editing but I am not sure), Vaknin tells you everything you want to know about narcissism (and a few things you may not have known) and offers advice to “normals” on how to deal with narcissistic people like himself. He does not glorify narcissists and in fact is quite critical of them. While it appears he wants to help people handle or even cut themselves off from narcissists, one can’t help but wonder if he wrote the book as a way to promote himself and if he might not actually take pride in having the disorder. After all, narcissism has become Vaknin’s claim to fame and he purports himself as an expert on the disorder (which I can’t argue with, despite his lack of professional credentials). It was Vaknin who coined the term “narcissistic supply,” which is now used by bonafide professionals in the field who specialize in NPD.

Most books about narcissistic personality disorder or malignant narcissism are written by doctors, psychologists, or other professionals who deal with them in their practice, so reading such a book by a self-proclaimed narcissist is an odd experience but gives the reader an entirely different perspective about what really makes narcissists tick–and in a way, perhaps a more accurate one. 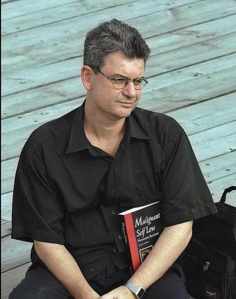 Vaknin with a copy of his book.

Vaknin also differs from the garden variety narcissist because of his brutal honesty. Pathological lying is one of the narcissist’s calling cards, but in 2009 Australian filmmaker Ian Walker made a fascinating and somewhat disturbing but at times extremely funny documentary about Vaknin called I, Psychopath. (I highly recommend watching this film, the extended version of which can be viewed on Youtube (I have linked the first section). In the film Vaknin lies about nothing, and in fact he’s as brutally and cruelly honest as Simon Cowell used to be when judging American Idol contestants (I definitely suspect Mr. Cowell is himself a narcissist, but I digress). That being said, there has been some controversy about Mr. Vaknin’s educational credentials. During one of his interviews with a psychologist, she questions him about his degree–he had written on the questionnaire that he has a Ph.D, but it turned out that doctorate is actually from a diploma mill and its validity is questionable at best. So dishonesty is not unknown to Sam Vaknin (as it isn’t unknown to the rest of us).

In the film, we are treated to interesting and slightly creepy, oddly lit stills of Vaknin superimposed over things like clanking machinery (hinting at how the narcissist is more machine than human), strange landscapes, and time-lapsed highways at night.

Vaknin was born in 1961 to a Turkish mother and an Israeli father. We find out that Vaknin has an extremely high IQ and he is in fact a genius. In his native Israel, he became extremely wealthy at a shockingly early age through clever (and probably dishonest) financial wheelings and dealings, and was a successful dot-com entrepreneur until he was busted for securities fraud in 1999, and lost all his money. He also postulated a scientific theory on chronons and time asymmetry.

At the tender age of 21, Vaknin was living the high life, flying around the world in a private jet, eating in the most expensive restaurants, visiting exotic locales all over the world, and raking in enormous amounts of money. The film describes how the most successful entrepreneurs and corporate bigwigs tend to possess three important traits that make them so successful: good looks, high intelligence, and most importantly, a high level of psychopathy (determined by giving the tycoons Dr. Robert Hare’s Psychopathy Checklist, which is most commonly used to make sentencing decisions for criminals.). Sam Vaknin possesses all three of these traits.

One of the psychologists who tests Vaknin during the film finds that while he does score high in traits that signify NPD, he scores even higher in traits that indicate Schizotypal Personality Disorder, Paranoid Personality Disorder, and bizarrely, scores highest of all in AvPD (Avoidant Personality disorder–a common disorder in narcissists’ victims). This psychologist does not think Mr. Vaknin is actually a psychopath, but that he may be narcissistic. Vaknin, for his part, seems petulant, insulted and almost angry that he is not more of the big, bad psychopath that he believed he was.

Later, his wife, Lidija, is also tested to find out if she is a typical “victim” (highly empathic, sensitive, putting other’s needs ahead of her own) and it is found that she is. And yet, although Sam and Lidija argue frequently, their relationship (at least on film) seems to work for them and Vaknin doesn’t seem excessively abusive, although he insists he has no capacity to feel love the way his wife does. It’s possible he may be more abusive toward Lidija off screen, but this is another thing we are left wondering. One issue that is raised is she wants a baby, but is unsure if her husband would make a good father, due to his narcissism.

Vaknin with his wife, Lidija.

Vaknin gives his filmmaker, Ian Walker, a difficult time, and while we don’t see an excess of bullying on screen, in Walker’s commentary, he frequently discusses the way Vaknin abuses and calls him terrible names when the camera is off. So to try to capture Vaknin’s alleged abusive behavior on screen, he has Vaknin take over the filming and film Walker. Indeed now we hear Vaknin hurling insults and abuse at him. Walker, for his part, seems hurt, but could this just be the two of them acting out a part for the sake of giving the film more credibility of making it more interesting? There’s no way to tell, but the experiment is entertaining enough.

During the film, well known professionals who specialize in psychopathy and narcissism are interviewed and give their opinions about these character disorders, and their opinions about Vaknin himself. Vaknin, for his part, seems irascible and easily angered (and sometimes acts like a petulant child), but he also is oddly likeable (which could just be his narcissistic charm doing its work) and occasionally is extremely funny. Vaknin’s high intelligence is obvious and he speaks English extremely well too, although it’s not his native tongue.

Vaknin gifts each of the doctors and psychologists who interview him a complimentary copy of his “Malignant Self-Love,” which could be a gesture of courtesy or it could be narcissistic.

Vaknin is an enigma. During the documentary I sometimes wondered whether he is actually a narcissist at all. He certainly doesn’t seem psychopathic (although I’m not going to say it’s impossible), but if he’s a narcissist, I don’t think he’s a particularly malignant one. My own opinion of Sam Vaknin is that he has Borderline Personality Disorder (BPD), which shares a number of traits with NPD because they are both Cluster B character disorders but differ in important ways. I think Vaknin has strong narcissistic, paranoid, and schizoid traits, but he is no psychopath. Clearly, Vaknin isn’t the easiest person to spend a lot of time with, but that doesn’t make him evil or a psychopath. However, he does say he was diagnosed with NPD twice–in 1986 and 1995.

I do wonder if he wants to be a narcissist more than he actually is one, and if so, why? Whatever the case, Mr. Vaknin has written an excellent and highly readable (if a bit verbose) book about malignant narcissism. I don’t personally care if he doesn’t have the right “credentials,” either as a professional or as a person with the actual disorder, because his book has helped so many people deal with the narcissists in their own lives better.

Update 11/20/14
I added a new post honoring Mr. Vaknin’s requests in the comments section, and also made the requested changes in this article. After viewing the links he posted, I’m much more convinced he’s really the narcissist he says he is.
https://otterlover58.wordpress.com/2014/11/20/sam-vaknin-read-my-post-and-has-a-few-corrections/