Are we in End Times as prophesied in Daniel and Revelation in the Bible?  Is it an extinction event brought about by human activities?  Or is this merely a dark time in history that we can reverse if we work at it or that will eventually resolve on its own?

Nyssa of Nyssa’s Hobbit Hole has written an article about all of this.  It makes for  interesting reading, whether you are a believer in End Times or not.

As always, please leave comments under the original post.

You also may be interested in videos by a pastor named Brother James Key.  He is an evangelical who is convinced Trump is the Antichrist based on Biblical prophecy.   I have to admit they are quite convincing.   He has a Youtube channel.   You may want to start with this video.

I’m not saying Trump (or Putin) is necessarily the Antichrist.  You will have to judge for yourself.   But I think it’s a possibility.

Another possibility that some skeptics have proposed is that the GOP/Trump is deliberately chumming the waters and causing events to happen that fall in line with Biblical prophecy, in order to “hurry up” the Rapture.  That could explain why some evangelicals don’t care about climate change or nuclear war.   As an example, Trump calling himself Chosen One (a precursor to eventually calling himself God) was contrived to match biblical prophecy and not a natural outcome; the same could be said of the Middle East peace deal and moving the US embassy to Israel from Tel Aviv to Jerusalem.   Rolling back regulations that keep climate change at bay or launching nuclear weapons could also lead to an Armageddon-like catastrophe.

For awhile, there’s been a growing Internet meme that states that the Illuminati (a secret fraternal organization started in Bavaria in the late 1800s and closely affiliated with the Masons) is pulling the strings behind everything from politics to the economy to the entertainment industry, and the people we see on our TVs and the media are nothing more than puppets attempting to indoctrinate the rest of us. It’s been purported that 9/11 was an “inside job”, the 2008 financial collapse was planned in order to benefit the richest 1%, and most or even all successful recording artists, actors and other entertainers are secret members of the Illuminati and undergo behind-closed-doors initiations that involve brainwashing,  devil worship and depraved acts such as bestiality and human sacrifice. They believe Illuminati’s sole purpose is to establish a New World Order that rejects God and makes Satan its master. Fundamentalist millenarian Christians swallow this idea hook, line and sinker because it’s in keeping with Biblical prophecy and to them, is proof we are seeing the last of the Last Days, when humanity becomes increasingly debauched, soulless, and turns away from the God of the Bible toward the Self as God (which they purport the New Age teaches).

Being a person who values reason over hysteria, I’ve always been a skeptic when it comes to such conspiracy theories, but lately I’m beginning to wonder. I’ve always believed 9/11 was (at least in part) an inside job and I wouldn’t doubt the financial collapse being one also. I’ve never trusted the government or politicians (OR the powerful corporations and the people who run them) and I strongly believe our society serves and rewards the wealthiest 1%, not the masses. It’s gotten a whole lot worse in recent years too, and psychopathy and blatant narcissism seems to be in excess these days and is treated as almost a virtue and a means to get ahead. But even so, I was still a skeptic about the Illuminati and always laughed when I’d hear the “crazy” conspiracy theories. “Oh, the Illuminati again LOL!” was my attitude whenever I read the warnings of yet another whistle-blowing Klaxon. I wasn’t even sure such an organization existed, never mind have such a powerful influence over the civilized world.

But the other day I was watching some videos of celebrities who allegedly were inducted into the Illuminati (these videos are all over Youtube) and saw something frightening: at some point after their initiation (and usually immediately following or during a star’s sudden rise to fame and fortune), the light goes out in their eyes and they become flat and dead looking.  Of course, Photoshopping can do a lot to “convince” us of the truth of that, so this alone wouldn’t convince me the theory is true. Besides, the entertainment industry itself can certainly take a toll on your soul once you achieve fame, without there being any secret demon-worshipping activities involved at all. When you become famous you lose your right to any semblance of privacy or a life of your own: your life isn’t your own anymore; it now belongs to the music or film producers and powerful corporations who are motivated by money and greed, and you must maintain the image they want you to present at all times if you want to keep your contract. In essence, you must sell out to the fame-machine. In that sense, you can actually lose your soul.

One example of the celebrities-are-Illuminati meme. Fact or fiction?

So it wasn’t the entertainers’ blank, expressionless faces and fake smiles that made me think there could be something unholy going on in entertainment (most obviously in music) as well as big business and politics. It was the symbolism. Almost all successful musicians these days use a great deal of Illuminati symbolism in their performances, music videos, and publicity photos: some of these are The Eye of Horus (the all-seeing eye) enclosed within pyramids (both of which also appear on the back of the American dollar bill), certain hand signs associated with the Illuminati, one eye being covered in some way, satanic goat’s heads (the god Baphomet), checkerboard floors, diamonds, and other satanic or illuminati symbolism. Although some effort is made to make these symbols subliminal, they are becoming increasingly obvious.

It’s believed by many that these entertainers are forced to “pay homage” to the Illuminati through these symbols, and that they also serve as a “secret communication” between Illuminati members that the rest of us won’t catch. It’s also been said it’s meant to indoctrinate the masses to the idea of satanism and the unholy, softening us to the eventual takeover of the world by the devil.

Illuminati symbolism in entertainment and politics is nothing new, but less effort is made now to hide it, and some form of this symbolism seems to appear in EVERY music video made by extremely successful music stars. Photos of celebrities in music, film and TV; and politicians and business leaders often show them covering one eye or making the ubiquitous Illuminati hand signs:

Beyonce and her husband Jay-Z are highly rumored to be high ranking Illuminati members.

The popular “devils horns” that’s often seen at rock concerts is actually an Illuminati symbol and us used in politics as well. 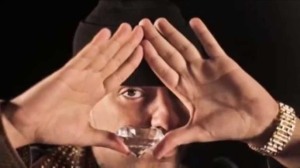 Another example of an Illuminati hand sign and another symbol, a diamond.

But even this wasn’t enough to make me think the takeover of the media and entertainment by the Illuminati might be true. It was this video of Taylor Swift performing at the 2012 AMA awards:

Taylor Swift, was, until around the time of this video (and her simultaneous switch from country to pop music), was a virginal pop-country princess whose videos and shows were wholesome enough for parents to take their preteen daughters to and Taylor was held up as a role model. Her songs were catchy and tuneful and she always dressed modestly and just seemed like such a nice person in an industry full of so much depravement and immorality. But here, we see a different Taylor. Yes, she is older and with age one would expect more “worldliness,” but I’m not so sure. This performance has been said by many to be a representation of her initiation into the Illuminati (which purportedly took place in 2009, with the Kanye West incident being a “test,” which she passed).  In the beginning of this video, she comes out on stage dressed in virginal white (meant to represent the early Taylor) but then is “raped” by the dancers (representing the Illuminati) and emerges dressed in black and red, and suddenly her demeanor changes from sweet to siren-ish. The video is full of Illuminati and Masonic symbolism too.
It’s interesting that this seems to be a pattern, particularly in the music industry: once a celebrity becomes a commercial success, suddenly they take a very dark turn and the symbolism begins to appear.

While I can’t say Taylor has lost her soul or has the dead-eye look some celebrities seem to get (in her interviews she seems quite together and happy and as nice as ever), she is now the most powerful person in the music industry and her success only seems to keep growing. Her music has also become a lot darker. Did she sell out to the forces of Satan in exchange for unlimited fame and fortune? Will she harden even more as she gets deeper into the cult? Will the light go out in her eyes? What about other successful celebrities? Are they masters of their fortune or are they really victims and slaves to a sinister force they have no control over anymore?

Is there really a such thing as the Illuminati at all? If so, does it really have that much power over our society and does it really represent the takeover of evil? Or is it all a huge delusion, the product of the overactive and paranoid imaginings of unenlightened people who don’t trust anything anymore?

What do you think? Let’s talk.