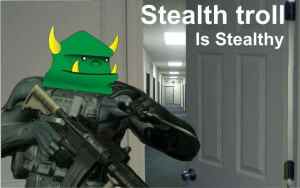 In two earlier posts I wrote about online bullies and trolls (not exactly the same thing, but close enough). I won’t explain here how they differ and are the same (you can read the articles which I’ve posted links at the end of this article), but I neglected to mention stealth trolls. Stealth trolls seem benign, but can wreak havoc on web forums and social media. I will describe two types of stealth trolls. There are probably others.

The Urban Dictionary defines a concern troll as:

A person who posts on a blog thread, in the guise of “concern,” to disrupt dialogue or undermine morale by pointing out that posters and/or the site may be getting themselves in trouble, usually with an authority or power. They point out problems that don’t really exist. The intent is to derail, stifle, control, the dialogue. It is viewed as insincere and condescending.

A concern troll on a progressive blog might write, “I don’t think it’s wise to say things like that because you might get in trouble with the government.” Or, “This controversy is making your side look disorganized.

The concern troll’s M.O. is stealth. They appear harmless. In the guise of “concern,” the troll infiltrates the website, seeming helpful, but their true intention is not to help, but to disrupt the community, dialogue or morale on the site. They probably know little if anything about the subject matter and their complaints are of a general nature. Their “concern” makes them feel superior. Concern trolls are probably narcissistic or even psychopathic, and their self-righteous “concern” makes them feel superior. Any attempt to pin them down and explain their “concerns” in greater detail or a request to explain the topic being discussed will usually cause them to disappear, but they’re likely to reappear under a “sockpuppet” account (another handle). The sockpuppet may be more aggressive in their trolling behavior and may even bully individual members or make openly hostile remarks about the site or its subject matter. A troll’s goal is to destroy the online community in the usual manner: by making its members leave the site.

This is a dangerous troll who who pits people against each other by sending private messages containing lies about another user. It’s an online form of the triangulating that psychopaths and narcissists do. They are almost always found on social media and forums. I’ll give a hypothetical example of what a Triangulator does. Let’s say Lisa and Brian are online friends. The Triangulator (let’s call him John) befriends both Lisa and Brian. One day John sends Lisa a PM saying Brian told him that Brian thinks she’s dumb (he never said this). Lisa gets mad and sends Brian a PM saying her feelings are hurt that he went behind her back and told John she was dumb. Brian says he never told John he thought she was dumb, and he doesn’t think she’s dumb anyway. Lisa isn’t sure who to believe, so the trust between her and Brian is compromised. John then sends Brian a PM telling him Lisa thinks Brian acts like a know it all (she never said this). When Brian talks to Lisa and she tells him she never said this, he isn’t sure who to believe and the trust between them is compromised. The Triangulator can destroy a friendship this way, and that’s exactly what he wants to accomplish. By using this tactic, Triangulators can totally break down communication on a site and cause regular users to defect.

Trolls are simply narcissists who derive pleasure upsetting and destroying a healthy online community. If you can’t ban them yourself, the best way to deal with a troll is to report them to the admin or if that isn’t possible, ignore them.

Earlier articles about online bullies and trolls:
Internet Psychopaths: the difference between Trolls and Bullies
Internet Trolls are Psychopaths