I don’t do much painting anymore (except painting the walls in my house), but during my 20s and 30s painting–whether on ceramic tiles or canvas–was very relaxing and enjoyable to me. I sold or gave away most of my artwork, but here are two I refuse to part with.

This first painting, which is an interpretation of a National Geographic photo of mountains in the Pacific Northwest, is hanging over my mantel. There’s a dark and rather eerie moodiness to it that everyone always notices but wasn’t present in the original photograph. I didn’t believe them but I remember looking back at the photo I painted this from and realizing how right they were.

I had been married to my ex for two years at this time and I think his subtle abuse was already beginning to take a toll on my state of mind and my soul.

I used to enjoy painting on tiles too. Here’s one I painted in acrylic (before I got a kiln* and started painting with fireable ceramic paint, which are tricky to learn to use because the colors in the jars are not always the colors they’ll be after firing!)

This is actually a depiction of myself and my fiance (the same man who almost destroyed my life for the next 27 years) during the height of his “love bombing.” It was a whirlwind romance, straight out of a storybook or Harlequin romance.

Beware of men (or women) who come on strong with the romance and sweep you off your feet–they are probably predators who have targeted you as prey.

All cynicism aside, I still love this painting and it hangs in my bathroom. We’re shown far away in this idyllic (and idealistic) scene (naked in the pond, naturally!), but I thought the likeness was still pretty accurate.

* I have not had the kiln since 1993. One of my cats at the time, an unfixed male, used it to “mark” and everytime I’d fire it up after that, the smell that permeated the house was unbearable! I couldn’t even sell the thing.

Here is another guest post by the same writer who contributed “The Narc from Costa Rica.” Again she has asked to remain anonymous, but I think this story does a better job of describing the narcissism of a man who seemed to be extremely romantic. Talk about a whirlwind romance!

It’s common for narcissists (especially somatic ones) to act very romantic in the beginning of relationships. But the problem is, it’s an ACT. They can sweep you off your feet with their charm, declarations of undying love (which are lies), seemingly endless desire to make love to you, and gifts of wine, candy and roses. They also can move in very fast, and it’s not uncommon for one to propose marriage very soon into the relationship. (There are other narcs who are relationship-phobic, usually the cerebral type.). My ex proposed only three months after we met. He was cerebral though, so not all “romantic,” fast-moving narcissists are somatics.

The man in this story, Michael, seems to be a covert or “vulnerable” narcissist. They can seem to have very deep emotions and be quick to express their insecurities and vulnerabilities, but they’re still dishonest and manipulative, and they still have no empathy and will leave you in a heartbeat if a better source of supply comes along. Covert narcissists can be more dangerous than aggressive (classic) narcissists because you never see what’s coming. They can completely fool you because they seem to need you so much.

A Beachside Affair
By Anonymous 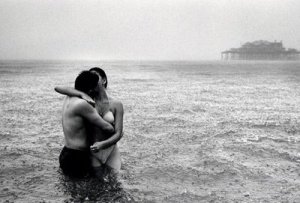 My whirlwind relationship with Michael lasted for only 3 months. It was a summer love, like something out of the movies. Our affair ended abruptly, leaving me completely gutted emotionally and even physically. It was as if he’d ripped my heart out and taken it with him, leaving me with a huge hole inside my soul.

I met Michael on the beach. We quickly became obsessed with each other. He was like an addiction to me. I went to work during the day and all I could think about was Michael. I’d go home and polish myself from head to toe, making sure I looked and felt as beautiful as possible. Before I met Michael I just didn’t feel good. I was in a failing marriage to another narcissist. My husband ignored me. He never talked to me and I was dying inside. I remember that I’d go home and get drunk on wine, just to blur out the feelings of emptiness I felt from my husband’s coldness, on top of having suffered an empty childhood and adolescence due to having been raised by a narcissistic father and a borderline mother who wasn’t much better.

I knew having an affair was wrong, but at that point I no longer cared. I needed to feel loved and needed. Michael fit the bill perfectly, at first. I remember the day I met Michael. He was beautiful, his tanned muscles shimmering and rippling in the sun. We talked for a little while and before long he started to kiss me and held me for 4 hours straight, as the sun went down over the ocean.

After that heady experience I made a decision to leave my husband because I no longer could stand being with him. There was just no comparison.

I’m not sure why Michael had me under such a powerful spell. I’m not sure if it was inverted or covert narcissism or codependency on my part that made me so attracted to him. I know he mirrored my own narcissism and I think that was part of the attraction. Or (in my thinking at the time) maybe it was just that we were both artists that craved something more and we needed attention and had a burning desire to express our vision of life through our art. All I know is that when the two of us got together we melted together like butter. All the love that I never got, all the love I craved and all my neediness was being filled by Michael and I couldn’t get enough of him. He was everything to me.

Michael had an apartment in a very famous town in coastal New Jersey that was known for its rock n roll legacy, especially Bruce Springsteen. Famous bands played in a place called The Stone Pony in Asbury Park. Back then, over 30 years ago, the town was run down and almost abandoned. The Stone Pony was the only thing that held the weak fabric of this town together. But I loved it there. This run down seaside town was always beautiful to me because I always felt like this was my home. I still do. I knew that one day I’d play up on the same stage where other famous artists had played. There was fire in my belly. A void that needed to be filled with a whole lot more than a man’s love. If there was an Angel on Ocean Avenue, she was certainly watching over me.

Micheal was an art student who had nude sketches of himself all over his wall. He played the guitar too and we often played music together and I would sing. I use to stay at Michael’s house every night. We went to parties at the homes of mutual friends we had met out on the beach. The bonfires were wonderful and we would all sit around and sing songs. We sang Beatles songs and Bowie songs and I felt like a reincarnated hippie. My favorite song we sang was David Bowie’s “Space Oddity.”

“Tell my wife I love her very much…she knows.
I’m here and I’m floating in my tin can.
Far above the world. Planet earth is blue and there’s nothing I can do.” 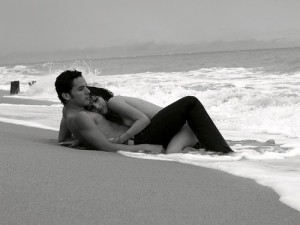 There was magic and presence and energy and the love in all the people we met at these parties and on the beach. People liked to watch Michael and I, because they were intrigued by our obsession and need for each other. We vicariously fulfilled their need for romance. I felt so validated, loved, sexy and happy. It seemed too good to be true and it was. This couldn’t be real life. It was too perfect.

We were a study in contrasts physically, and I think that’s another reason for the fascination our friends had for us. Michael had beautiful blue eyes and long blonde silky hair, and a great body. I had long black hair and lots of curves. People liked to photograph us together. We use to sit down in front of a long mirror in his room and stare at the contrast. We made each other feel beautiful. And together, we were. At that time it seemed we were good for each other’s self-esteem. At the county college Michael was studying for an Associates degree in graphic arts we were both asked to pose nude for $10 dollars an hour for the students who sketched still lifes in the human anatomy drawing class.

Michael’s background was sad. He told me that he was beaten by his father with a belt consistently during his infancy and his dad was also an alcoholic. Michael was depressed and he had to take psychiatric medication to fight his depression from the abuse he endured as a child. I remember watching him go into this weird state where sometimes seemed almost frozen and off in some other universe (dissociation is a common symptom in people with NPD and BPD). When in these near-catatonic states, he’d punch the floor or the wall over and over again, sometimes lasting for up to 20 minutes. It was sad and very scary. He was not mean or malignant though. He seemed like a gentle, artistic soul who just couldn’t take care of himself. He was never controlling, but seemed very needy for my constant attention and love. I think he was a covert narcissist.

Our affair came to an abrupt end at the end of that summer, because Michael left me for another women who said she was in love with him. She was willing to pay the rent on his apartment. So in the end, he chose money and security over me. I was devastated because the drug of my addiction to him filled me all summer and was suddenly ripped out of my heart in an instant and the devastation and grief was almost too much to bear.

But if I’d known about narcissism, I would have known Idealize and Devalue is all part of their game. They can’t help it. Even covert narcissists are at heart predators out to use you and throw you away when you’re no longer of use to them.

My next phantom lover was a drummer named Karl. I was so needy that I of course fell into the hands of another narcissistic man. And so it goes on…