I’m acquainted with a woman who loves children. She loves them so much she’s chosen a career as a first-grade teacher. She gets together with her nieces and nephews on the weekends and takes them on outings–to parties, to movies, to the zoo. Sometimes she just hangs out with them, and listens to them regale her with their childish tales. She’s available for babysitting on many evenings–and is more than happy to do it too. But my friend is also childless. What surprises many, including me, is that she’s childless by choice. As she told me, she loves kids but was just never interested in taking on the responsibility of raising one. As she puts it, “I enjoy kids immensely, but I can always hand them back to their parents when they get cranky or I’ve had enough. I’m afraid if I had children of my own, I’d stop liking them as much as I do.” Child-free women have the reputation of being child-haters, but this isn’t always (or even usually) the case. Some, like my friend, are even huge fans of kids.

I’m the same way about dogs. I adore dogs. I think they’re cute, hilarious, sweet, loyal, and interesting. I always stop to pet dogs (if they are friendly), I watch videos of dogs, I read stories about dogs, and I have a job where I frequently encounter dogs and my interactions with them are one of the job’s high points. But I don’t have a dog and don’t want one either.

Although dogs are awesome, they are also a lot of work–work I don’t have the time or inclination to take on. They require attention–lots more than a cat, and they are expensive. If you acquire a puppy, you must have the time to train it. You can’t just leave it alone all day while you go to work or do other things. You have to take it out when you’d rather be sleeping or watching TV, and you have to devote time to socializing it. Even if you acquire an older dog who’s already housetrained and socialized, you have to give it attention and play with it so it doesn’t develop behavior problems. You have to walk it and take it to the vet. Like a child, you are stuck with that dog for life. 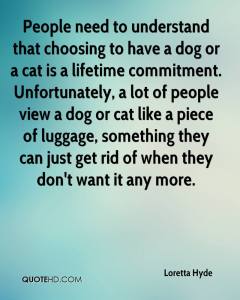 Some people get a puppy and then callously drop it off at the pound when they realize how much work it’s going to be. I think that’s plain wrong. Like children, dogs need to feel securely attached to their people, and dogs that are abandoned or rejected often find it difficult to become attached to a new set of owners (if they aren’t euthanized first). I think if you agree to adopt a dog, it’s a lifetime commitment. Sure, there may be some situations where you can’t keep a dog (a particular dog may turn out to be a “bad fit” for a particular owner, or the dog has unforeseen behavioral problems that cannot be resolved), but in most cases, I think the decision to get a dog just wasn’t thought through ahead of time. Puppies are irresistible. People see a puppy and think, “I must have it!” without considering that puppy won’t always be a puppy and that they are making a 10+ year commitment to another living thing.

I’ve had several dogs in my life and I’ve loved them all. My last dog was a handsome lab mix named Dexter and he was as sweet and good and loyal as they come. Like most dogs, Dexter was very social. He required a lot of attention and would whine and whimper when he wasn’t getting it. When my daughter moved out last year, she wanted to take Dexter with her. I was a little sad to see him go, but I also knew she would pay more attention to him than I ever had, so I agreed to part with him. I can still see Dexter whenever I want, just by taking a short car ride. But I’m not responsible for him anymore and that’s fine with me.

Sometimes, especially after playing with or interacting with a particularly adorable dog, I’m tempted to go to the shelter and pick out a dog for myself. But I know I wouldn’t want the commitment. I love dogs but also like to be able to “hand them back to their person” when I’ve had my fill. I’ll stick with my cats for now. They’re all the “dog” I need. 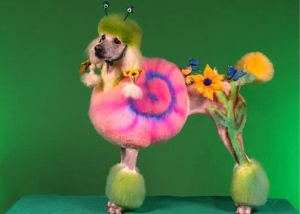 Earlier today I posted Sam Vaknin’s story about his goldfish Ned. He seemed to be feeling something close to empathy for the tiny creature’s suffering when it became ill and something closely resembling grief when the end finally came. Rather than watch the fish continue to suffer, he decided to take matters into his own hands. Did he do this to end the fish’s suffering–or to end his own suffering?

But even if he only desired to end his own suffering, watching the goldfish suffer was causing him pain. So either way, he cared about the fish, even if he only did what he did because watching Ned continue to get sicker was too painful.

This made me think about other narcissists I know who own pets. Do they really care about their pets, or are their pets, like their children, just extensions of themselves?

I think the answer is both. Yes, many narcissists who own pets regard them as extensions of themselves. I think of a neighbor of mine, an insufferable, conceited malignant narcissist if I ever saw one, who has a purebred Bichon Friese. She said she would never own a “mutt” from the pound. Oh, no. Only a purebred dog who makes HER look good will do. She puts bows in Fifi’s hair and gets her toenails painted at the groomer’s. She takes her everywhere and shows her off, as if she’s showing off a new car. Narcissists treat their children the same way–as accessories to make them look good, but because a dog isn’t supposed to have a mind of its own, it’s more acceptable and far less damaging to a dog to be treated this way than it would be for a child.

Yet it’s clear she loves that dog. She spoils Fifi rotten, and the little dog seems happy enough. Again, it’s a dog, not a child, so being objectified is probably okay. I know if anything were to happen to Fifi, this woman would be devastated with grief, at least until she found a new source of canine narcissistic supply. She’s the type who would probably have a funeral for her dog and a custom made urn with Fifi’s likeness painted on it to display on her mantel.

But she would also not hesitate to have Fifi put down were she to become ill. Some may say this is the humane thing to do–that anyone with a conscience and a heart would not want to see a pet suffer needlessly, and that’s true if the pet is truly ill and has little to no chance of recovery or is in a great deal of pain. But to a narcissist, a sick pet is also an inconvenience and a burden. A sick pet is no longer an acceptable extension of themselves; it becomes a separate being who has needs of its own that do not fit the narcissist’s agenda. A sick pet no longer makes them look good.

How much will a narcissist sacrifice before having an ill pet put down? Most people won’t euthanize a pet unless everything else has been tried first. It’s a last resort, something none of us want to do, but at some point it becomes more selfish to try to keep a sick pet alive than to put an end to its suffering. I remember years ago a narcissistic woman I knew had her cat put down because it had worms. The cat was suffering severe diarrhea and was losing weight. The worms could have been easily treated, but she didn’t want to be bothered. Cleaning up the cat’s messes was too much of a chore, and apparently so was taking the cat to the vet to be treated. So she had her cat put to sleep. It’s pretty obvious this woman didn’t have the cat euthanized out of humane compassion, but because it was more convenient than trying to keep him alive. To her, the cat was not a living creature, but a toy to be tossed away the minute it was no longer so much fun to play with or required maintenance. 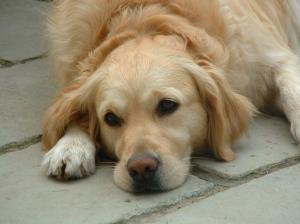 It can work the other way too. I knew a narcissistic man who also had a dog, a beautiful Golden Retriever named Bruno. When Bruno was about 12, he developed cancer. The man was very attached to Bruno, and used to tell everyone he was the only friend he had. Even when Bruno got to the point where he stopped eating and slept most of the time, the man refused to have him euthanized. The animal was clearly suffering, and everyone told him it was the only humane thing to do, but the man still refused. Bruno finally died at home in an emaciated state. Clearly, this man cared nothing about Bruno’s suffering even though he appeared to love the dog. He obviously was attached to his pet, but if he truly loved him, he would have put the animal’s needs first, even if it hurt to do so. Real love–whether for a pet or another human being–requires sacrifice and putting the other’s needs first. This man may have “loved” his dog, but he was putting his own needs first.

Most narcissists claim to be attached to their pets, and most of the ones I know truly are. But is attachment love? Or does attachment to a pet just mean the animal is another source of narcissistic supply–a creature who is never going to judge them, disagree with them, insult them, or abandon them?

Sam’s grief over his goldfish appears to have been real, and I think he did the right thing because that fish was most likely suffering (as much as a goldfish can suffer) and wasn’t going to make it. Would he have been the same way with a cat or a dog–or a child? We can’t answer that. Maybe it’s easier for a narcissist to feel empathy and act in unselfish ways for a simple creature–a reptile, fish or invertebrate–who is very unlike a human (unlike a cat or dog, who resemble human children in many ways) and therefore make fewer emotional demands on them. Maybe narcissists just can’t empathize with other humans or highly evolved animals who resemble them too closely or make too many emotional demands.