Brevard, North Carolina, is just to the southwest of where I live, in Transylvania County.

Transylvania County was named that because of its physical  resemblance to the Transylvania area of the Carpathians of Romania.  In fact, the movie “Cold Mountain,” which takes place in western North Carolina during the Civil War, was actually filmed in the Transylvanian part of Romania due to the less developed, mountainous terrain which would have resembled western North Carolina during Civil War times (also because it was cheaper to film it there).   Even today, the appearance of both areas are strikingly similar, as the below photos show.   They also share a similar climate and rural mountain culture.

It rains a lot in western North Carolina, but nowhere does it rain as much as it does in Transylvania County, which is actually classified as a temperate rainforest.  Transylvania is also known for its many waterfalls.  Within this temperate rainforest lives a unique creature that lives nowhere else on earth:  the white squirrel.    It’s not an albino, because its eyes are pigmented, but other than its unusual color, it’s a perfectly normal squirrel.    No one is quite sure why the squirrel (also known as the Brevard squirrel) evolved a bright white coat in an area that doesn’t normally get an abundance of snow.

Actually, most of them aren’t true Russians, they are Slavic people from Eastern Europe, especially The Ukraine, which was once under Soviet rule, so that probably explains some of the confusion.

Eastern Europeans began to flood Buncombe County during the 1990s, with Asheville being at the center of the immigration activity. In the past decade or so, Slavs have become such a large chunk of the demographic here that signs in most of the downtown public buildings, such as the courthouse and the health department, are in English, Spanish, and Russian (or Ukrainian, which I think is similar to Russian and uses the same Cyrillic alphabet–I can’t tell the difference!).

Some long-time residents of this area complain about the huge influx of the “Russians,” as they do about the large Mexican population already established here. Personally I find both groups add a lot to the culture, and don’t cause any problems at all. In the case of the Ukrainians (to my understanding, the largest group of Slavs moving to Asheville and Buncombe County), they are escaping from an intolerable situation in their own country, where Ukrainians, in spite of declaring their independence from the Soviet Union in 1991, are facing religious abuse and their country is being torn apart by opposing political forces which are outside the interests of freedom. Here is an article (about a year old) from the Asheville Citizen-Times that goes into more detail about the discord going on in the Ukraine. 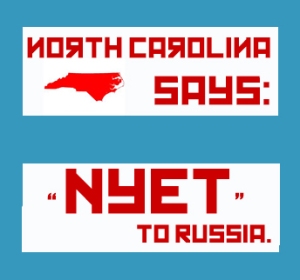 Sadly, this attitude is pretty common. The new immigrants aren’t even technically Russian.

Why have so many Eastern Europeans chosen the Asheville area as their destination? I’m not sure, but I think it could have something to do with the similar climate and terrain in the Southern Appalachians (the entire Appalachian range runs from Georgia through Maine) to parts of Eastern Europe (even though their climate is somewhat more continental and less humid–and has colder winters). The Southern Appalachians have been compared by many people to the Carpathians which run through the Ukraine, Romania, Slovakia, and Serbia, and one of the counties next to Buncombe County is even called Transylvania County due to it’s appearance. The 2003 movie “Cold Mountain,” a civil war epic about people living in western North Carolina during the mid 19th century and later, was actually filmed in Romania (it was cheaper to film it there, and the Carpathians are less untouched by modernity than the Smoky and Blue Ridge Mountains). I’ve seen photos of the Carpathians, and it’s almost spooky how similar they look to this part of the US! 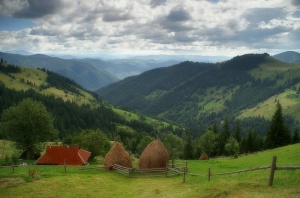 Which one is the Blue Ridge Mountains? (Click on the photos and the picture titles will tell you which is which).

The culture of the mountain people in both areas also have similarities. There’s an organization called the Carpathian-Appalachian Conference which holds meetings and sponsors educational and other events that seek to understand the similarities and differences between the two cultures.