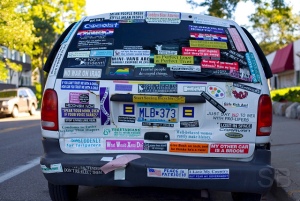 Obnoxious potential road ragers on the left and the right. Don’t get close enough to read their stickers or they might brake check you.

I always enjoy reading the articles on Cracked.com. Some are funny, but I also always learn new things I never knew. Today there’s one called called 6 Things That Annoy You Every Day Explained by Science.
Annoying thing #4 is about the epidemic of Road Rage, which seems to keep getting worse.

The article is hilarious as well as informative. The captions under the photos are always priceless too.

“I have important, Quesadilla-related business to attend to.”

Believe it or not, road rage increases with number of bumper stickers the driver has on their car. I see a pattern here. Drivers with bumper stickers are more territorial than other drivers, and my guess is that the more territorial drivers are probably more narcissistic than other drivers too. I would also suspect a narcissist would also be more inclined to road rage than a non-narcissist–because they imagine everyone else is violating their territory. The more bumper stickers, the more narcissistic the driver, and so it follows the most narcissistic drivers would also be the most likely to become enraged if someone dares to cut them off, tailgate them, pass them in the breakdown lane, or commit some other rude or not so rude faux pas on the road.

Even one sticker or decal is enough to raise the likelihood of the driver having to be physically restrained by loved ones after somebody doesn’t let him in to the lane in time.

People think of their vehicles as extensions of themselves, and to a narcissist, a vehicle is like his own little kingdom on wheels. A vehicle gives any driver more power (and a way to hide behind a big bad machine even if said narcissist is a 97 pound weakling or a little old lady), but a narcissist will use his vehicle to intimidate, harass and scare others on the road who dare offend him or get in his way.

Wealthy narcissists are probably likely to drive a huge SUV or Hummer or a high end car like a BMW * (see joke at bottom), Mercedes or Prius, and these types of vehicles probably won’t be sporting bumper stickers. Too declasse for a rich, snobby narc.

Someone driving a Ford or a Honda without bumper stickers and who drives in a hesitant manner or is considerate to other drivers and actually does things like yield for them is probably codependent and attracts narcs like honey attracts flies. They’re the kind of drivers obnoxious narcissists in big SUVs like to tailgate and honk at just so they can watch them get flustered and panic on the road. Drivers like me, to be honest. I piss off narcs on the road.

It doesn’t take much to get most of us enraged when we’re driving a car. People cutting us off, people not using their blinkers, people using their blinkers too much, people driving annoyingly blue-colored cars. When someone cuts us off when we’re on foot, we might feel slightly annoyed, but we don’t usually have the same urge to yell, swear and honk a horn at them. Not unless there’s some major problems in other parts in our life, or we’re a clown.

Not all drivers are equally aggressive, though. Some of us just take a few deep, calming breaths when a guy drives all the way past the line of waiting cars in an exit lane, and then cuts in right at the front. Others actually get out of their cars and break his windshield with a crowbar. Why this extra rage? 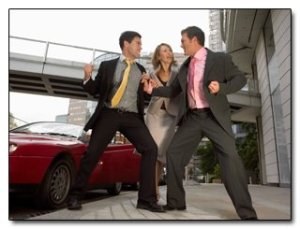 Not pictured: The “coexist” bumper stickers on both cars.

What The Hell Is Going On Here?

First, a question: What do you think is the best predictor of whether someone is prone to road rage and aggressive driving? Whether he’s driving a beat-up pickup or a lavender Prius? The presence or absence of prison tattoos? The presence or absence of a crowbar holster on the back of the passenger seat? No. It’s the number of bumper stickers on his car. Even one sticker or decal is enough to raise the likelihood of the driver having to be physically restrained by loved ones after somebody doesn’t let him in to the lane in time.

How does this work? Well, consider the hypothetical person who gets into your personal space on the street. Unless he’s a total dick, chances are he will make up for it in some way. If he doesn’t actually say “sorry,” he’ll usually display some sort of unconscious, apologetic body language. Most of the time, this is all that’s needed to defuse the bumping-into situation. Machines, on the other hand, are incapable of this kind of polite signal, which is probably why you’re more likely to yell at your computer when it freezes up than you are to yell at your servant when he drops your caviar.

When driving a car, we humans consider our vehicles a part of our territorial space. So when someone cuts us off, or behaves discourteously, we instinctively react as if someone had run into us on the street and then ignored us completely.

So what’s with the rage-causing stickers? Scientists have theorized that the act of marking a car means that the driver has a greater sense of this territoriality — in other words, he identifies the car more as an extension of himself. Which is why they feel the need to mark it with a sign of his personality. Researchers have found that it makes no difference whether a bumper sticker says “Visualize World Peace” or “Guns Don’t Kill People, I Do.” To sticker-users, any vehicle-based rudeness means you’ve basically done the road equivalent of cutting in front of them in line and then flipping them the bird two inches from their nose.

Add in an exhaust fart to the face if you really want to piss them off.

* Q: How does a BMW differ from a porcupine?
A: The pricks are on the inside.