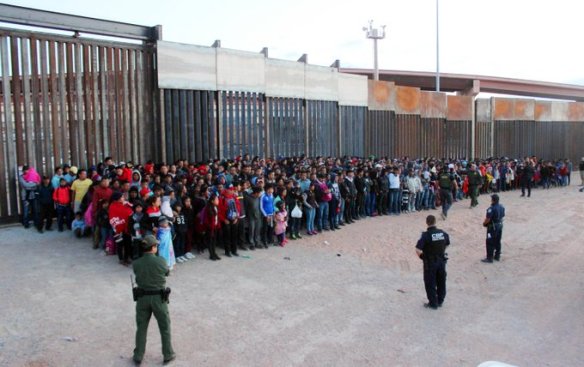 Above is a photo from AP News showing Central American migrant families rounded up and contained by US armed guards.   According to the accompanying news story, the federal government is making plans to separate children from their parents (yes, they plan to continue and even increase this horrendous and cruel practice) and house the children in former army barracks.   They are also planning to cut off or reduce all supportive services to these children, including English language lessons, recreational programs, legal services (young children as young as two have already been forced to represent themselves in court), and other services such as mental health counseling — at a time when the children are traumatized by family separation and need it most.

Not cruel enough for you?  Oh, it gets even worse:  border patrol agents are being instructed to confiscate migrant childrens’ medicine.

The cruelty, as it’s been said, is the point.   This is what happens when a narcissistic sociopath and his same spectrum sycophants and henchmen consolidate power and inevitably, as they always do, choose scapegoats (always vulnerable or marginalized populations) on which to unleash their hatred.

The photograph shocked me.   All the photographs from our southern border are  shocking, but this one stood out to me because I was immediately reminded of the old black and white photos from Nazi Germany of SS guards rounding up Jewish families like cattle (and of course separating parents from children, a common practice by the Nazis, which was harrowingly depicted in the movie Sophie’s Choice when the title character played by Meryl Streep was forced to choose between her young daughter being taken away or losing both of her children).

This is fascism, in case there’s any doubt.  We are living in a fascist state with a fascist leader, and just as in Nazi Germany,  most people are either too afraid or too apathetic to mobilize against it.   Or they’re in denial and don’t think it’s that big a threat.  Or…they approve of it (usually justifying it with callous comments such as “they shouldn’t have come here” or “it’s a deterrent.”)

Okay, fine.  Let’s say you don’t care about the fact these are mostly poor families who walked thousands of miles to escape certain death in their home countries (not the “rapists, drug dealers, and gangs” who find other ways to get in).   Even if the parents are culpable (which they aren’t),  what about the children?  Did they have any choice in the matter?

The Germans were exactly like us.   As with Trump, only about a third of the German people actually supported Hitler, while the other two thirds either didn’t believe there was a real threat or saw the threat but didn’t think there was anything they could do.   Only a few people, such as Sophie Scholl and her resistance group The White Rose Society, dared to speak truth to power.   Hitler and the Nazis would never have been able to rise to power or killed six million Jews (and other marginalized groups such as Gypsies, homosexuals, and the mentally deficient) had the German people believed the threat was real and mobilized to fight back against it.  They learned the hard way, and now it looks as if we may have to learn the hard way too, unless we mobilize and fight this evil right now.   We are running out of time.

I’m astonished and dismayed by how little mobilization against encroaching fascism there has been in this country.  How few protests and marches.  People just shrug their shoulders, turn off the news, and go on with their lives as if nothing has changed in the past two and a half years.   Even the British turned out by the millions to protest Trump last week during his visit to the UK, and he’s not even their president!   We should be ashamed of ourselves.  Why are we letting another country do our work for us?    Are we really just a bunch of sheep?  Are we really going to idly stand by and look the other way while children and their families are being tortured and allowed to languish and die in the American version of Nazi concentration camps?

Below are two groups of photographs, each group containing the above photograph rendered in black and white and placed next to similar photographs from Nazi Germany to emphasize the fact there is literally no difference in the plight of the captives.   I can honestly say I had trouble telling which photograph was the recent one.

If these photographs bother you, good. They should.

Can you tell the difference?