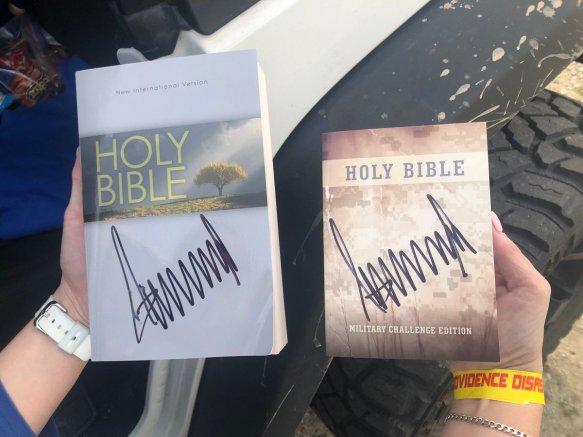 Just as ripping babies from their mothers at the border and throwing them in cages makes a mockery of America’s legacy of compassion for immigrants, and Trump’s tax breaks for the rich and endless fruitless investigations into people he considers his enemies make a mockery of democracy, Trump signing Bibles for Alabama tornado victims yesterday makes a mockery of Christianity, and even faith itself.

Trump’s faked empathy for people in a red state like Alabama, while victims of the California wildfires and Hurricane Maria in Puerto Rico got nothing but disdain from this president, says more about Trump’s narcissism and the fact that the people in Alabama are much more likely to be part of his base (and therefore vote for him in 2020) than people in California.   And of course, as far as Trump is concerned, Puerto Rico isn’t even part of the United States, but a “shithole country” full of those brown people he doesn’t like, and as they can’t vote anyway, they certainly won’t be casting a ballot for him.  So why bother helping them in their time of need?   There’s nothing in it for him.

But beyond the selective “empathy” he’s showering on tornado stricken Alabamians, the Bible signing he staged for his evangelical base is far more unsettling.

Although it may seem like a minor thing,  I actually think it’s one of the most sinister things Trump has done (outside of atrocities like throwing babies in cages at the border or taking away healthcare from those who most need it, etc.).   Many people, even atheists and nonChristians, are also deeply unsettled by it.

How is it possible that people outside the Christian faith can see how diabolical this is, but Trump evangelicals, who pride themselves on how “Christian” they are, can’t?  Maybe it’s because they have enough distance from the situation that they aren’t blinded to the truth: in signing Bibles as if he himself is the author, Trump is actually attacking true Christianity, which rejects everything he stands for.  In signing Bibles for his gullible and cultlike  base, he is also consciously or unconsciously equating himself with God (“I alone can fix it.”)

Trump and his dominionist and far right evangelical donors and sycophants (I’m looking at you, Franklin Graham and Jerry Falwell, Jr.)  have twisted Christ’s message of love and unity into its polar opposite.  Instead of teaching compassion for the needy, humility, and a life of service, and the recognition that “God’s kingdom is not of this world,” these fake Christians celebrate greed, unfettered capitalism (no protections against corporate excess and exploitation), destruction of the planet in the name of corporate profits, the torture of children and families, the denial of healthcare, and the oppression and removal of basic rights for women and people of color. They turn a blind eye to sexual abuse and infidelity (as long as the guilty party is a Republican), and they worship a hateful, narcissistic, eternally angry, vengeful diety who hates the sick, the poor, and foreigners, and rewards the wealthy and powerful with even more wealth and power, to whom he has given “dominion” to rule over the rest of us.

“Again, the devil took Him to a very high mountain and showed Him all the kingdoms of the world and their glory.  “All this I will give You,” he said, “if You will fall down and worship me.”  — Matthew 4:9

If Satan is real, this is exactly what he would do.   What better way to turn good people away from Christianity (or in the case of Islam, the Taliban/ISIS is used the same way) and at the same time attract sadists and sociopaths?   Do you think the devil would be transparent and use things like pentagrams?  Nope.  That would be too obvious.

Trump signing Bibles (he not only signed them, he signed their covers!) as if he’s the author makes a mockery of Christianity (and the Abrahamic religions in general), as well as violates both the first and second commandments.   God has not elevated a serial adulterer, sociopathic narcissist, torturer of innocents, and treasonous criminal like Donald Trump to some exalted favored status, and anyone who believes Trump is God’s chosen is listening to the wrong preacher.

Although Christianity can and has been used for the betterment of humanity, it has also been used to justify slavery, genocide, torture, and other atrocities. That’s why the separation of church and state is so important to democracy, and to my way of thinking, democracy is the most Christlike, humane form of government possible.

If you’re a Christian (and even if you’re not), I highly recommend these awesome progressive Christian blogs (and the last one by a former evangelical who discusses the abuses of the New American Evangelism from personal experience).

John Pavlovitz: Stuff That Needs to Be Said

Trump supporting evangelicals are today’s Pharisees.   Many evangelicals of the dominionist persuasion (an increasing number of evangelicals and fundamentalists — and even some very conservative Catholics — have fallen prey to this dangerous Christofascist movement) even call themselves “prophets and apostles.”    Use your God given discretion when dealing with people who claim to be “anointed” or have certain “gifts of the Spirit.”

I have one last concern, and it’s probably the most important one of all.
Trump’s evangelical supporters’ declarations that Trump was chosen by God (and their dangerous belief that any criticism of him constitutes disobedience to God) only feeds Trump’s malignant narcissism. Although he may not himself even believe in God (though I can’t prove this), the fact that so many people believe he was specially selected by God to usher in His kingdom must give him some pretty intense narcissistic supply. Anyone who is familiar with NPD knows that the more narcissistic supply you give to a narcissist, the worse and more abusive they get. Trump evangelicals are feeding and nurturing a monster. 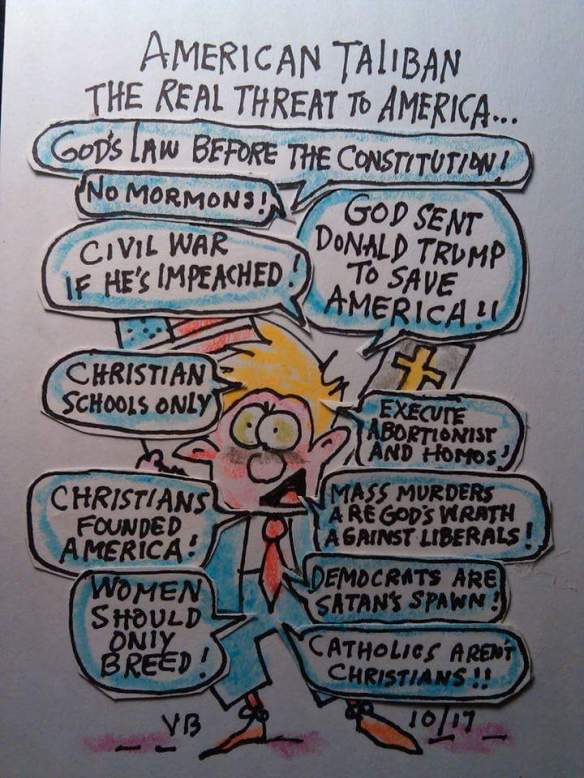 I am afraid, lest as the serpent deceived Eve by his craftiness, your minds should be led astray from the simplicity and purity of devotion to Christ. For if one comes and preaches another Jesus whom we have not preached, or you receive a different spirit which you have not received or a different gospel which you have not accepted, you bear this beautifully. For such men are false apostles, deceitful workers, disguising themselves as apostles of Christ. And no wonder, for even Satan disguises himself as an angel of light.  Therefore it is not surprising if his servants also disguise themselves as servants of righteousness; whose end shall be according to their deeds.