Entering the Innsbruck Mall. Notice the 1970s era tile pattern on the gleaming white tile floor and the fake gaslight.

I finally got my registration this morning. My car’s legal!

But I’ve already said enough about the registration ordeal. This post isn’t about that. It’s about the building the DMV registration and title office is in.

It’s housed in a dead mall. The Innsbruck Mall in Asheville, NC to be exact. The mall is small but so famous it’s featured on Deadmalls.com, one of my favorite websites.

The indoor mall’s heyday was the late 1950s through probably the 1990s, with their peak in popularity occurring in the 1970s and 1980s. After that, they seemed to lose popularity quickly in favor of the “big box” stores like Target, Walmart and Staples. No doubt the rise of online shopping had something to do with it too.

The Innsbruck Mall was a busy social and shopping center in the 1970s and possibly the late 1960s (I don’t know the exact year it was built). When the much larger and hipper Asheville Mall was built in 1979 or so, the Innsbruck Mall (which is just down the road and offered no competition), began to lose customers and its stores began to close.

Innsbruck is barely alive but someone’s keeping it on life support. Nearly all the storefronts are empty or boarded up, and the only inhabitants are offices of various kinds–the DMV, a couple of insurance agents, and one or two other offices–and inexplicably, a bridal shop (which just opened) that I’d bet will close soon just like all the other stores that have tried to do business here in the past 30 years. There are no longer any anchor stores. I don’t know who owns Innsbruck or why they bother to keep this dinosaur clean or even maintain it, because the mall is empty. The only humans you see there are the long line of people in front of the DMV and an occasional random homeless person who isn’t going to find any food or handouts here, since there aren’t any eateries or a food court and the only other people are DMV patrons who probably aren’t in the mood to drop spare change in a homeless person’s coffers.

I took some photos. The mall is creepy but very clean. It’s also a wonderful testament to late 1960s/early 1970s mall decor. When I was there today, there was actually 1970s music being piped in on the mall’s ancient, crackling PA system. It was quite eerie but in a cool way. I felt like I was in a timewarp and I wondered if the choice of music was deliberate. The DMV office looked just as dated, with dirty wood paneling, a worn beige tile floor, stained acoustic ceiling tiles, and unpleasantly bright fluorescent lights. I didn’t take a picture of it.

It makes me giggle that the plants surrounding the benches (which are real), actually look pretty healthy. Maybe they like all the old Elton John, Seals and Crofts and Captain and Tennille crackling through the speakers. Hey, I do and I’m not a plant. 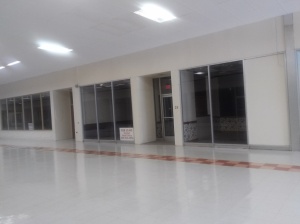 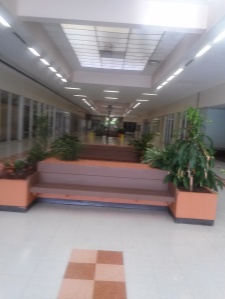 ETA: I didn’t take a photo of the DMV office, but I found this one on Google!
Notice the tired 1960s/1970s wood paneling (which I’m pretty sure is original): 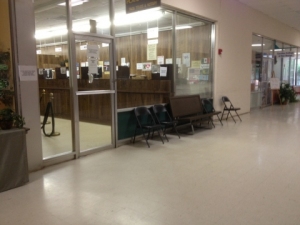 DMV at the Innsbruck Mall.

I found this photo of the mall from 2012–not looking much more active than it does now. Notice the faux-“colonial” architecture of the storefront. To me, that screams 1960s.

Here’s a “virtual tour” I just found too (from 2011). Both the Christian bookstore and the furniture store shown in the video are closed and nothing ever came along to replace them. They’re just more empty storefronts now. The long-abandoned Ingles grocery store is still there, creepy as ever. From the look of it, I’d guess it wasn’t ever renovated since it was built, probably at the same time as the mall it served as an anchor for. It’s green and white tile floor pattern, pale green walls, and overall look remind of the smallish supermarkets I went to with my mother when I was a kid.
The tour shown here is fascinating but kind of sad.

Here’s an even better virtual tour that includes hilarious commentary. 😀