The holidays are coming and the cold weather is here, and baking is on my mind. I adore red velvet cake, especially around the holidays, but every recipe I’ve seen for it says you must use cream cheese icing. But I can’t stand it–even though sweetened, it still tastes like cheese. It doesn’t go with cake.

Now I love me some cheese, but not with dessert. Fine, I’ll make an exception for cheesecake, even though I don’t love cheesecake as much as most people do. Cheese is tart and salty and belongs with meat, potatoes and pasta, not with cake! Yeah, I know cream cheese is mild and spreads easily, but it’s for toasted rye and bagels, not cake.

I can’t even purchase a red velvet cake because I know it will probably be covered with cream cheese icing. It looks just like buttercream and that’s such a mindfuck. The only way to tell the difference is after the cake is a few days old, the cream cheese forms little cracks where the icing hardens, like the crust that forms inside the foil wrapper of a block of Philadelphia brand cream cheese. Ewwww! 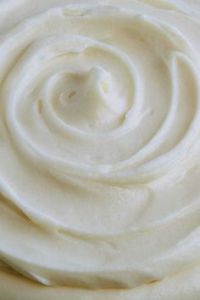 Cream cheese or buttercream? You can’t tell by looking at it.

Everyone seems to love cream cheese icing, and there aren’t even too many complaints about it on the web. I don’t get it. What’s so great about it? It’s disgusting. It’s not healthier than buttercream. It’s still loaded with fat and cholesterol.

Give me good old buttercream any day, which tastes awesome on red velvet cake and any other kind of frosted cake. But not just any old buttercream will do. I can’t stand storebought buttercreams (the kind in the can) which are way too sweet, and even worse is the fake “buttercream” used in supermarket bakeries and on Wal-Mart’s cakes and cupcakes. That stuff tastes just like Crisco and leaves a greasy, unpleasant feel in your mouth.

No, a good buttercream must be made from scratch. When made properly, it’s sweet without being too sweet, and has a fabulous buttery taste that doesn’t coat your mouth with grease the way commercial buttercreams do. It spreads easily on the cake, and it looks fantastic. Here’s the buttercream I’ll be using on the red velvet cake I plan to bake tomorrow:

Mix the first 3 ingredients in a bowl until a stiff paste forms. Add tablespoons of milk while stirring until frosting is of a spreadable consistency.
Do not ice the cake until it is completely cooled.

* You can substitute vanilla extract with lemon extract, almond extract, or any other type of extract depending on what type of cake you are making.