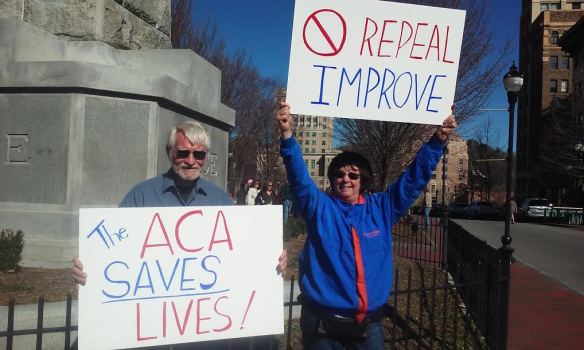 This event, which was really an outdoor Town Hall meeting, focused on the right to affordable or better yet, single payer healthcare and the importance of not repealing Obamacare, since the ACA was an important step in that direction — and now it’s under threat.

I arrived early, so early there were only a few people there before me.  The day was cooler than it has been, but clear as a bell, as you can see in the photos.  It was fun taking pictures of all the different sights I saw.  Some of the protest signs were really creative. 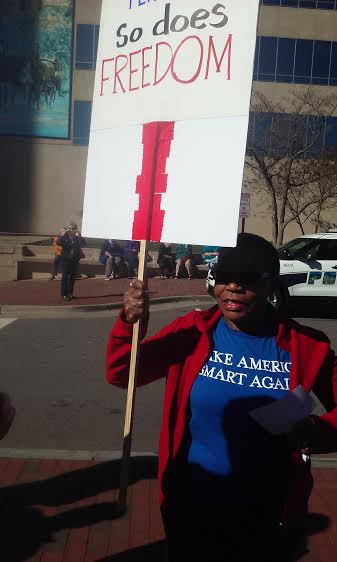 I apologize — the tops of her signs got cut off but I think her shirt is a hoot.

I would say probably about 400 people attended, and maybe a few more than that.   Most of the people attending were older folks — some older than me (Medicare age), which makes sense since older people are the most likely to have medical issues and the most at risk should they lose their healthcare.   There were some young families there too though, and a couple of the speakers were quite young.

I was surprised how many people brought their dogs, and one woman, wearing a “pink pussy hat” had dressed up her little dog in an adorable miniature version of the hat she wore.   The sign she had made was pretty funny too.

Not everyone there was a Democrat. There were some independents, and even a few stray Republicans, who agree that ACA should not be repealed, like the sign of the lady shown below. When it comes to affordable healthcare, party really doesn’t matter. Some actually understand that. 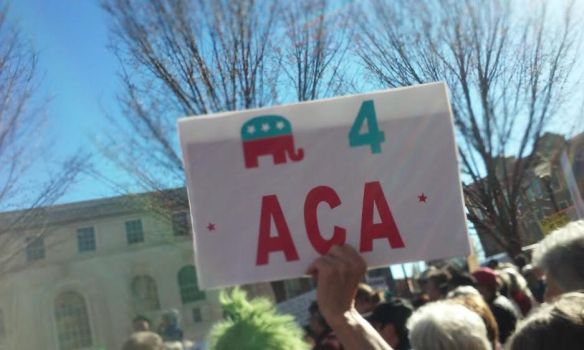 Some of the signs were quite funny.  Here are a couple.

There were four speakers.  One speaker’s story brought tears to my eyes.  She talked about her son, who was born in 1974. Doctors urged her to have an abortion because he had some genetic abnormalities but she refused.   Well, the condition he had left him extremely vulnerable to certain forms of cancer, especially colon cancer.   In 2008, just before Obama was elected, when he was just 34, he had to be rushed to the emergency room.  He hadn’t been seeing doctors regularly  because they didn’t have the money and he could not get health insurance because of his pre-existing condition.  He was too sick to work enough hours to get company sponsored health insurance so he never got the surgeries and other treatments that had been recommended.   So he just did without.

One of the young volunteers.

On the day he was rushed to the ER, some tests were run, and it was found he had developed inoperable colon cancer. He died just before Christmas in 2008, just after Obama was elected, but before Obamacare was a reality.  It was too late for him.

The woman, who was now in tears, concluded her story by saying that no politician who says “No” to the ACA or who wants to repeal it has the right to call themselves pro-life.  Life doesn’t stop at the end of the birth canal.    Being pro-life means caring for people of ALL ages — and making sure everyone has affordable health care. No exceptions.

These are the kind of tragic personal stories that used to happen on a regular basis before the ACA was passed.  People dying prematurely and unnecessarily, and sometimes suffering horribly — just because they couldn’t get health insurance and weren’t wealthy enough to pay for treatments out of pocket.    And now our “dear leader” wants to roll back not only that but is also threatening social security, Medicaid, Medicare, and even Veteran’s benefits.   Can you imagine how horrible things would be if they were to succeed in taking all that away?   We can’t allow that. 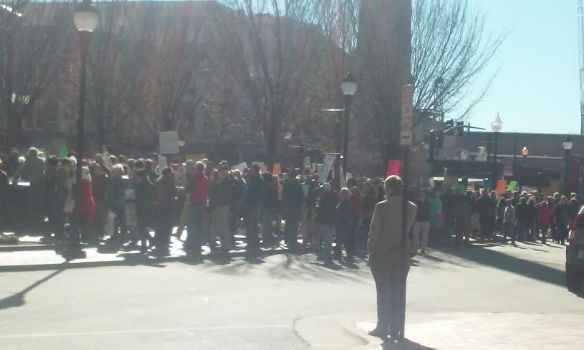 I took lots of pictures — the rest are below this post. I didn’t have a sign this time, but next time I will make sure I do.  It was a good experience, and was very peaceful. In spite of the serious issue being addressed, it was a lot of fun too.

On my way out, there was a vendor selling related merchandise, such as T-shirts and buttons.   The proceeds go to the Indivisible movement, which co-sponsored this event.   These are my purchases (I’ll  be wearing these at the next event I attend — and carrying a sign too).  The button in the middle was free — it was given to me when I signed up for emails.

The rest of the photos: