I don’t know whether Satan exists or not.  But if he does, he can’t be very powerful.  He was merely an archangel, with about as much power as Michael, before he fell.  How did he get to be nearly as powerful as God himself, as most fundamentalists would have you believe?   We are told Satan “planted” the evidence for evolution, causes natural disasters, and can even create life (parasitic creatures, viruses, and cancer cells, for example). But angels never had that kind of power; only God himself can do those things.

Some argue that God allowed Satan free reign over the Earth because of free will, but that still doesn’t explain why he would suddenly have Godlike powers, like being able to create life forms and cause natural catastrophes.    No angel or archangel has ever been able to do those kinds of things.  Would God have given him that sort of power just because he demanded to have it?   I think not.

Satan is given way too much credit, in my opinion, and attributed with way too much power.   He also gets way too much attention.  It all seems like a form of idolatry to me.  As the Ultimate Narcissist, Satan would be tickled pink at all the attention he gets and power that’s attributed to him.

Personally, I think evil resides in the hearts of men.  Since we humans have trouble accepting our dark side, we project it onto an outside entity.  “The devil made me do it,” we say, not wanting to accept responsibility for our own evil actions. If there is a supernatural explanation for evil, I think it’s likely there’s a whole population of fairly weak malicious spirits (demons, if you prefer) trolling the the earth.  Collectively, they could do a whole lot of damage.   It’s also possible Satan is real, but if so, I doubt he (or any of his demons) would be planting fake fossils to “prove” evolution or recombining DNA into invasive and parasitic life forms.   Still, I think it’s wise to be very careful with or completely avoid dabbling in the occult.

God sometimes comes through in small, unexpected ways when we appeal to him for help.  I think he appoints certain people to serve as angels right here on earth.    A dear friend of mine, active for a long time on this blog, empathized with my problems coping with Seasonal Affective Disorder, and offered to purchase me a light therapy lamp, knowing I could not afford one. (They aren’t cheap).   I burst into tears of gratitude when she told me she was buying me one.  She didn’t want me to pay her back either.

Yesterday I got my package from Amazon.  At first I couldn’t imagine why I was getting a package, since I haven’t ordered anything recently.  I had forgotten about the light therapy lamp.   But then I remembered, and excitedly opened the package.

It’s a handsome streamlined model, portable, perfect for propping up next to me while I write on my blog.  It also makes a terrific reading light.

There really are angels among us.   You just never know how God will come through.   I’m also taking Melatonin (which regulates the sleep cycle) and St. Johns Wart (a natural herbal antidepressant).  Two new front tires on my car so I don’t have to worry about sliding all over the roads when the ice and snow starts, and I’m good to go.

I’ll let you all know how this regimen works on my SAD.

Here are two photos of my new light (closed and open). 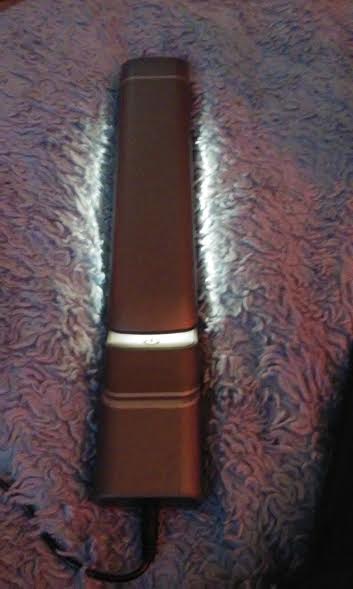 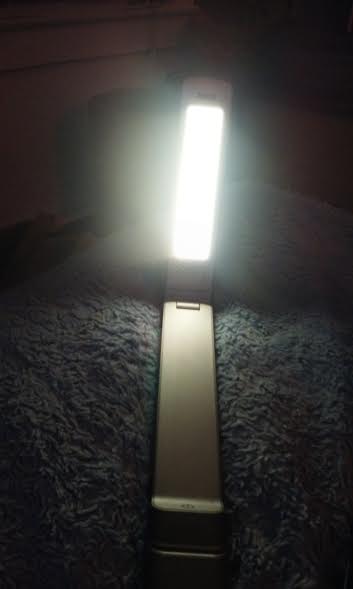