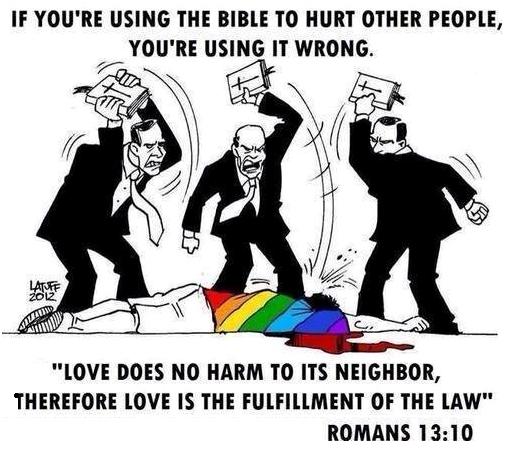 Christian Right leaders (in both politics and the churches) — many who embrace the horrific theology of Dominionism/Reconstructionism — pretend to care an awful lot about morality.    They rant on endlessly about abortion and homosexuality.  They want to roll back laws that protect women’s health and reproductive rights.   Today, Trump passed a bill that bans transgender people from military service.

But do they really care about morality?

I don’t think so.  Their hero (who is supposedly going to make America a “Christian nation”) is a philanderer, adulterer, tax cheater, con-man, possible traitor, narcissist, bully, and only worships himself and money.   He holds himself above the law and doesn’t even think he needs God’s forgiveness.

Trump talks an awful lot about God — such as his tweet today that said (the caps are his own), “IN AMERICA WE DON’T WORSHIP GOVERNMENT. WE WORSHIP GOD.”   Yet I doubt the man has ever darkened a church door, said a heartfelt prayer, or ever really read the Bible.   Trump doesn’t give a hoot about God, only about power and control.   He’s a man without a conscience or a moral compass, but he  sure does seem awfully concerned with everyone else’s morals.

To the powerful leaders of the Christian Right (including many church leaders), morality means only one thing, or maybe two things (and they are closely related):  gender roles and sexual behavior.

They care nothing about being kind to others, helping those in need, welcoming strangers, turning the other cheek, loving their enemies, telling the truth, calling out wrongdoing, being ethical in business dealings, paying their fair share, and loving their neighbors as themselves.   In fact, when you hear them talk, they hardly ever mention the Gospels and Jesus’ message of love.

Instead, the cherry pick the most punitive passages from the Old Testament (and ignore those like the one illustrating this post) to justify their greed, hatred, bigotry, racism, sexism, denial of facts, and lust for power and control.   Certain passages have come in handy for instilling fear and terror which are used to dominate.   They talk about hell an awful lot, and seem pretty sure they’re not going there but YOU are if you disagree with them.     Dominionist church leaders even tell their followers that they will burn in hell if they didn’t vote for Trump or don’t support his policies.   It’s a toxic stew of religious abuse, fear, and hate — and unfortunately, it works.     It operates in the same manner as a cult — because it is a cult.

They use the talking points of abortion and homosexuality to instill fear (of going to hell), and control.   To a lesser extent they focus on other things that offend them — strangely, almost all are related to gender roles and the patriarchal belief that women are biblically mandated to be submissive to men (even when the man is an abuser):  women’s reproductive health (including birth control), adultery, divorce, private sexual behavior, and sex roles in the family.    Oh, and there’s a few other things they condemn:  Muslims, atheists, and liberals.

They justify their patriarchy and narrow minded views by quoting selectively from the Bible, but ignore the words of Jesus, who rarely if ever mentioned sex roles or homosexuality, never sent away a stranger, and never once said women were required to submit to men or tolerate abuse.  I don’t know for certain what Jesus’ actual views about sexual behavior were (since he never really went there), but I do know that there were things that were far more important to him, such as being kind to your neighbor, not being greedy and selfish, welcoming strangers, and caring for the needy and sick.

Jesus was gentle and kind.  He never turned his back on the “least among us.”  He was even loving toward sinners, as he was toward the adulteress who approached him.   But he only had harsh words for the powerful Pharisees, who were the equivalent of today’s legalistic right-wing Christian leaders and politicians.

America has a long history of the separation of church and state, and for good reason.   The Founding Fathers weren’t stupid.  They knew that when you try to mix the two, you wind up corrupting both.  That is what’s happening now.   There’s nothing un-Christian about keeping church and state separated.   In fact, it’s what’s kept Christianity from turning into a cult of power and hate.

Things that until very recently were considered sinful or at best, secular — greed, selfishness, seeking wealth and political power, corruption, hatred, bigotry, and taking from the poor — have now all been embraced by the Christian Right, using the heretical doctrine of dominionism to justify their actions.   Incredibly, they have Christianized the diabolical.  It makes you wonder who their real “god” really is.

They go on about the “sanctity of life” but seem to care only about fetuses and embryos.   But they are anything but pro-life.  Anyone who wants to take Medicaid away from pregnant women, make women’s health (including pregnancy) a pre-existing condition,  support the death penalty,  build more weapons, support torture, start wars, remove laws that keep the mentally ill from buying guns, gut education funding, destroy the environment,  remove laws that make our workplaces safe,  and kick millions of people off healthcare are definitely not pro-life.

I find it hard to believe far right Christian leaders even have much empathy for the unborn.  They seem incapable of empathy, so it makes absolutely  no sense that they would care so deeply about unborn babies but at the same time be so callous about the health and lives of born babies, children, women, refugees, and humanity in general.   Especially when you consider that Medicaid covers nearly half of all deliveries.  If you toss all those pregnant women off Medicaid, what will happen?  A hell of a lot more abortions, that’s what.   So how are they pro-life?  They aren’t.

The truth is, they don’t care about people, born or not.   The abortion issue (and other gender-related issues such as homosexuality) is a talking point they’ve latched onto in order to control people, especially women.    It’s also how they’ve managed to marry together religion with politics.  Far right politics has hijacked the churches and corrupted Christianity.    Their “morality” is all about control, and they will do the most immoral things imaginable to get it, as we see with this presidency.

I’m fed up with right wing politics’ bastardization and corruption of Christianity to suit their own agendas.  Over time, they have twisted Christianity into something dark and diabolical.    These heretics have held Jesus hostage for almost 40 years and it’s time to take him back.

I apologize about how harsh this may sound, but I’ve been feeling pretty strong about it lately, and sometimes the truth hurts.