I decided to take my daughter with me on a leisurely hour-long drive south on the Blue Ridge Parkway up to Mt. Pisgah, which is part of Pisgah National Forest.  Mt. Pisgah lies where four counties meet (Buncombe, Haywood, Transylvania, and Henderson) and does not belong to any of the counties since it lies on government land.   There’s a place there called The Pisgah Inn, which has a restaurant that serves excellent food, even though it’s infamous for its very long waits.

The weather wasn’t great–cloudy, windy, a little chilly and threatening rain, and we got a somewhat late start (I had to spend the morning getting new front tires), but we decided to make the drive up there anyway, since the leaves are now at their peak and I wanted to appreciate the fall colors and weather.  Besides, I was hungry and wanted an excuse to eat out.

There are 8 short tunnels on the way through the Blue Ridge along the part of the Parkway that goes to Mt. Pisgah, and as we ascended the weather grew quite cold and even windier–so windy I could feel it buffeting my small car as we drove along.   At first I thought there was something wrong with my car until I realized it was just the wind.  Leaves were blowing everywhere, but the colors really were spectacular, and looked even more so against the mostly overcast sky (although there were patches of sun in places).

When we arrived at the Pisgah Inn, which has a hotel, a gift shop, and the aforementioned restaurant,  it was so crowded (in spite of the iffy weather) that we had to drive around the parking lot about 5 times before we found a parking space.   When I opened the door, I was almost blasted back in by the force of the wind.   It was cold, blustery, and probably gale-force.  I actually felt like the wind was going to blow me over and at one point grabbed onto a rail for support.    Supposedly the temperature was in the low 50’s but it felt like it was in the 20s or 30s because of the wind.  I pulled my hoodie tight and actually put the hood over my head.   I took a few pictures of the beautiful view (facing south — you can see as far as the Piedmont of South Carolina from where we were)  before we hurried inside. 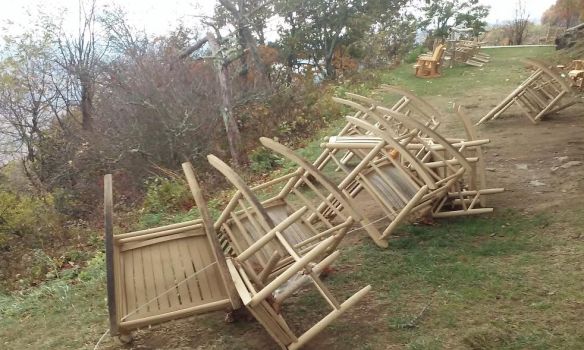 There were some chairs that people use in the summer that had been tied down for the fall winds.   I think they look rather forlorn here, and at first I thought they had blown over before I realized they were just tied down. 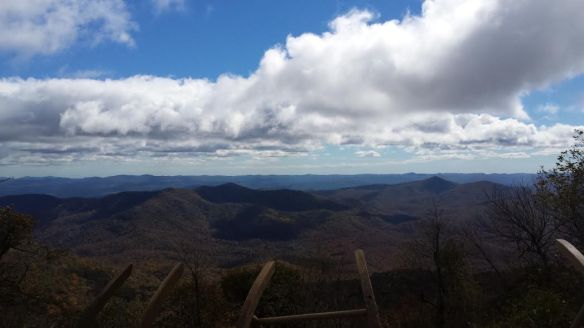 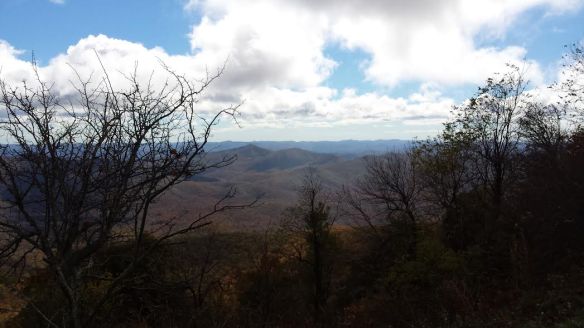 We had to wait about an hour for a seat, so we spent some time browsing the gift shop and venturing outside when we dared.    Finally we were seated.  I ordered an appetizer of French Onion Soup and a chicken pot pie with a very light, flaky crust and garnished with a sprig of rosemary that looked like a tiny Christmas tree growing out of it.  My daughter had a pulled pork barbeque sandwich with cheese and fries (the fries, which seemed to be fried in a coating of cornmeal, were great).   For dessert, we shared a slice of the best French Silk pie I ever ate–the crust was a coconut flavored crumb crust, which contrasted nicely with the silky chocolate smoothness of the filling. 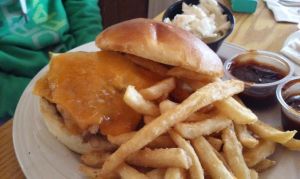 The restaurant faced south, which has the best view.   We were at such a high elevation that it’s actually at the level of some of the lower level clouds.  As we sat and looked ut the window, clouds moved in, at times obscuring the view and creating a thick fog.  When you’re sitting inside clouds, you can see how fast they actually move.   I felt like we were inside an airplane (only with much better food!)

It was a good day. I could almost understand the huge appeal of fall.      The brisk (cold!) fall weather made me feel invigorated, and after we ate, I felt pleasantly relaxed, even sleepy.  When I got home, I turned on the heat for the first time since April.