Just this past week, I read this and this (a video of Fritts’ disgusting sermon calling for the execution of LGBTQ people is linked in the article, if you can stand to watch it).   I felt literally sick to my stomach after reading these articles (and watching that awful video) and almost had to vomit.

Fritts, the homophobic police officer, has since been relieved of his duties, but it’s the first article that’s really disturbing.   A group of “Christian” preachers are having a “Make America Straight Again” event in Orlando, Florida, in response to “Pride Week.”    Last I heard, free speech was still legal in America, so of course people have the right to express homophobic opinions.  But what’s really chilling is that one of the preachers leading the event is praying for violence against the LGBTQ community during their Pride events being held in the same city!   Not only that, but several of the scheduled speakers will be speaking about their belief in the mass extermination of LGBTQ people.   That sounds like something the Nazis or some of the Middle Eastern countries under Sharia Law would do.  It chills me to the bone that this sort of thing is becoming increasingly acceptable and normalized here in America.

What kind of person prays for violence or even death against a group that isn’t violent themselves, but who merely have a lifestyle some believe is sinful?   A person full of hate and violence, that’s who.  Certainly not a follower of Christ.

These are far from the only incidents of blatant homophobia infiltrating the law and politics in this country.  Like everything else that’s bad and rotten, it’s gotten worse under Trump.   He emboldens homophobia, misogyny, and racism, partly because of his hatred for these groups of people, but it’s also a big part of his efforts to appease the religious right, who apparently believe Trump is their magic genie.  They feed his massive ego by diefying him and telling him he’s anointed by God and above the law,  and he gives them what they want.   Easy peasy.   It doesn’t take a genius to figure out why Trump gives the religious right what they want, and it has nothing to do with him being somehow “God’s chosen” or caring about “morality.”   Trump’s lifestyle has been and continues to be one of the most immoral (or is it amoral?) I’ve ever seen, and he’s never shown an ounce of repentance.  He’s a hypocrite who does whatever gives him power and wealth.  The only fruit he bears is rotten. 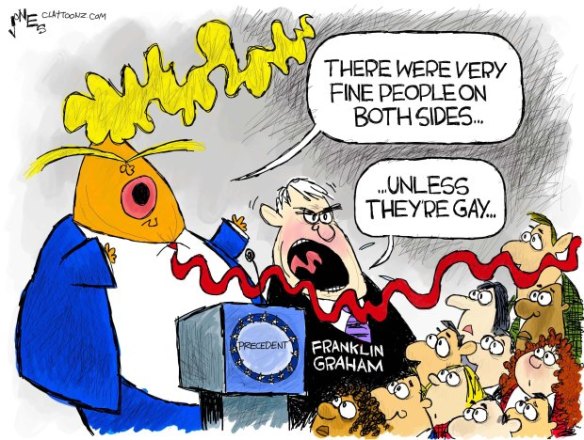 True morality isn’t about what women do with their bodies or what gender you’re allowed to love anyway.  It’s about the way you treat others.  I’m sure Jesus would agree.  Every day he showed the most vulnerable people and the marginalized nothing but kindness and acceptance, including the sinners.   It was the dominionists of his time — the wealthy and powerful Pharisees who demanded strict obedience in the name of God — that he condemned.

My son is gay.  He is also one of the kindest, sweetest, funniest people I have ever known.  He has brought so much joy to my life, and the lives of his friends.    He is a wonderful, talented, and intelligent human being who is empathetic,  has never hurt anyone else intentionally, and who also, like many gay people, struggled emotionally with his sexual identity before he was able to “come out.”

I don’t believe being gay is a choice.  No one just wakes up one morning and says, “Gee, I think I want to be gay” (or bi, or transgender, or what have you).  I don’t think a gay person can be “cured” any more than a tiger can change its stripes.   To think there are so many hateful people in this country — including people with enough political power to change laws — who want him dead or think he’s an abomination because of his sexual preference fills me with existential dread.   Now that these homophobic nutjobs have been emboldened by Trump’s “war on political correctness” and open hatred, and his shameless pandering to the religious right in exchange for their financial support and deification of him,  I’m actually becoming terrified for my son’s safety.

There are dominionist politicians high in government right now who are packing the courts with far right judges willy nilly, and I’m afraid they may well succeed in their efforts to turn America into a theocracy ruled by biblical (Old Testament) law (the “Christian” version of Sharia law).  I hope that if the United States continues in the dark direction it seems to be headed, my son can find a way to leave the country.  In the meantime, I pray for his safety.  America no longer feels safe.