ICE and Border Patrol roundups, incarcerations, and deportations are happening at an increasingly alarming rate in recent weeks, and the abuses inflicted on those targeted are also getting worse.   While border security initially focused only on criminals from entering our borders, now that definition has expanded to include non-criminal immigrants who live respectable lives and have families.  Targeted individuals now include children and Dreamers, the elderly and the sick.  Kids, even babies and toddlers, are being cruelly separated from their parents, and husbands are being torn from their wives.  People who have lived and worked in this country for decades and contributed to society in countless ways are now being rounded up for deportation by border patrol agents, who appear to act without mercy or compassion, and often with force and violence.  The other day, I read with horror about a busload of people in Florida all being forced to produce ID proving their citizenship.  Those who couldn’t prove they were born here were arrested and detained.  That is un-American!

On this day, a day of remembrance for the millions of people who lived (and died) during the Holocaust,  it’s beyond sobering to realize that Hitler’s Third Reich began almost exactly the same way.   Jews and other targeted groups weren’t initially sent to concentration camps and gassed to death.    The first step toward extermination was identifying them as “not one of us,” dehumanizing them, and emboldening the “base” (Hitler’s adherents) to ostracize, shun, and attack them. 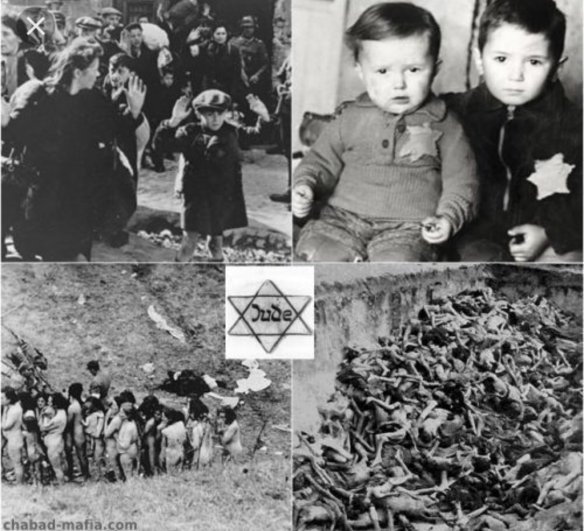 The Holocaust began with profiling and targeting such as ICE is doing and Trump’s base is encouraged to do.   The German people were mostly able to normalize or dismiss it.  In less than 12 years, things escalated to what is shown in the two bottom pictures.

Trump is doing exactly the same thing Hitler did.  Muslims, Mexicans and other “non-white” immigrants are only the first groups to be targeted and rounded up — they are the new “Jews.”    Eventually, just as Hitler did, LGBTQ people, the disabled, the mentally ill, political dissenters, and anyone else who doesn’t fit the Trumpian ideal of straight, white, Republican, rich, and Christian will be targeted as well.  That means most of us, and it includes many in Trump’s own base.   If not stopped, this targeting will eventually involve a “final solution,” just as Hitler’s Germany did.   Concentration camps are not far off, unless this trend is stopped.

History tends to repeat itself when the oldest generation still alive no longer has a living memory of the atrocities of the past.   Most people who had reached adulthood by the time of WWII and the Holocaust are no longer with us.   I’m sure most surviving WWII veterans, who fought the Nazis, are horrified at what they see happening today.

May we never forget.

Remember the Holocaust — Or It Will Happen Here (Millennial Politics blog)