About six AM yesterday morning a loud noise woke me up.   At first I thought it was thunder, and then I pulled back the curtains and looked out the window.  It was still dark outside, but the small four unit apartment building next door was in flames.

I made the call to the fire department, and apparently no one else had bothered to, because later on in the news story,  it said”the call came when the fire was already in an advanced stage.”

We were lucky.   There is a large tree in our yard that almost touches the roof of the apartment buildings, and there was shrapnel falling off the flaming roof into the bushes below and even the grass.   The fact there’s been so much rain was probably the reason the fire didn’t really spread once it touched the grass.  But if that tree had caught flame from the roof … well, let’s just say I may not have a house right now.   Thank goodness we woke up when we did.

Tragically, one elderly woman in the apartment building didn’t make it out.    Another person was injured and is in the hospital in serious condition.   I hope no pets were trapped inside.

The police are suspecting arson.  There has been some suspicious activity in that building lately, and they are investigating.    I took two photos — the one you see heading this post was taken around 6:20, before the fire department arrived.   It was taken just as the fire was spreading to the roof.  The second (below) was taken several hours later after it was put out.  The building continued to smolder for the rest of the day.   All four units were completely hollowed out. 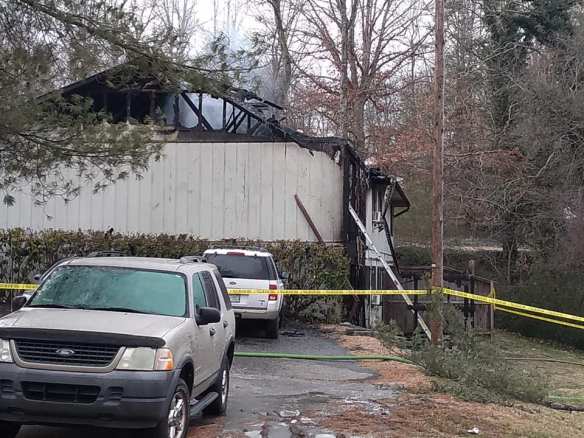 Here is the news story that appeared yesterday evening.