I love this guy and his videos.  He has a fun, upbeat style.  Follow his channel on Youtube.

This is helpful to me right now.  Not that therapy isn’t working, but I feel stuck and powerless because of the political situation.   This has never happened to me before. 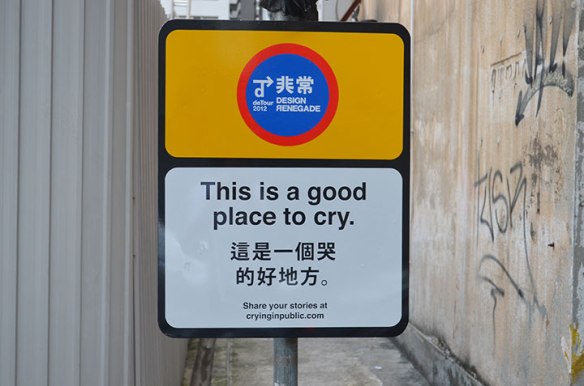 Credit: cryinginpublic.com — part of a series of art installations in Hong Kong, 2013

Funny and useful if you’re the type who cries easily in public places.
I actually wish I had this problem. I have to work hard at it to even cry in private. But if I did have this problem (or if I ever do again), I’d be referring to this list.
I especially enjoyed the reference to losing your sh*t because your husband is a manipulative narcissist.

Unless you’re one of those lucky people who lives in the middle of nowhere and never has to leave your house, chances are at some point you’ve had a mini-breakdown in a public place. It happens to us all! Normally it’s not anything earth-shattering that brings it on — perhaps you’ve had a particularly crappy day at work, or maybe you’re feeling extra tired because you had one too many glasses of free wine at that happy hour thing last night and then stayed up until four in the morning worrying that you’re going to spend the rest of your life alone? But sometimes it is actually a more serious/horrible thing, like your boyfriend tells you he’s been cheating on you in the cereal aisle of a grocery store or the doctor calls you at the office and tells you to come in for some scary test.

No matter what puts you in a fragile state, once you’re there it doesn’t take much to push you over the edge. One micromanage-y email from your boss or a funny look from a stranger on the street or the wrong song popping up on your iPod and the camel’s back is broken. It doesn’t matter that you’re standing in full view of 200 other commuters, your tears (or full-on wracking sobs) cannot be stopped. It feels terrible, but there’s no shame in it! You just have to ride it out and do what you can to minimize the damage.

First things first: When you find yourself on the brink of one of these emotional tornados, the best thing to do is the same thing you should do during an actual tornado: seek shelter. Never be shy about bolting from any kind of social situation if you feel tears welling up. Lie and say you’ve got an urgent phone call you have to take. Or, if you’re in some kind of professional meeting, excuse yourself by saying you don’t feel so well. I generally think it’s better for coworkers/clients to think you’ve got a stomach bug than to start guessing about what personal drama is making you cry. Wherever you are, don’t worry about what people will think, just make something up and get out of there.

Read the rest of this article here.