I heard this this morning and I just can’t help smiling every time I hear it.  So cute and witty, even if it’s just stoner rock.

I’m featuring this song a second time, because it has special meaning for me today and the message — that beauty and grace can still be found even when everything has been lost — is profound and so important, especially to those of us who have often felt (and feel) so lost.

The early 2000’s weren’t exactly the best time for popular music. Sirius, Youtube, and EDM (for the most part) were still in the future, and radio rock, though still ubiquitous, was well past its prime. The airwaves were full of interchangeable post-grunge, nu-metal, Britney Spears, and unmemorable R&B and rap. But there were a few gems that stood out all the more because they were so rare. One of those gems was 2000’s “Beautiful Day” by the supergroup U2–this was one of the last great rock songs.

From the Wikipedia entry for the song:

According to Bono, “Beautiful Day” is about “a man who has lost everything, but finds joy in what he still has.” Blender interpreted the song and the line “it’s a beautiful day” as “a vision of abandoning material things and finding grace in the world itself”

I remember “Harvest” was one of the first albums I ever bought with my own money (that wasn’t bubblegum!) and “Old Man” was probably my favorite song from it.   It’s timeless.

Most people, when they think of what sort of music was popular in the late ’70s, automatically think of Disco. But these were also the years of the rise of punk and new wave, which heralded the ’80s to come. The Ramones were one of the first punk rock bands in the United States, and 1978’s “I Wanna Be Sedated” was one of their most well known tunes.

The official video is entertaining and hilarious–almost as much fun to watch as the song is to listen to. It’s hard to keep up with all the crazy goings-on (and I do mean literally crazy). You might feel like you could use some sedation yourself by the end of it.

Back in the day (late 70s and most of the 1980s), the Talking Heads were among my favorite new wave bands.    “Wild Wild Life” was one of those songs (“Psycho Killer” was another)  that I couldn’t get enough of.  I first heard it in David Byrne’s independent film project, “True Stories” in 1986 and went out and bought the album of the same name.  I kept playing “Wild Life” on repeat until I had to purchase a new copy of the album.  My copy was on vinyl–CDs were new on the market but hadn’t overtaken LP sales yet.

At the time I was a young newlywed and I still thought I’d married a good man.   My new husband hadn’t started showing his true colors yet (or I just didn’t see or chose not to see the red flags).    I remember being incredibly flattered because he often compared my looks with Tina Weymouth, the bassist for the band (and in fact, in those days I did resemble her).

So without further ado, here’s my 1986 earworm.  Yes, that is a young John Goodman (of Roseanne fame) in the video–he appeared in the David Byrne film and some movie scenes are in this video.

I was going to wait until I do another Monday Melody (sorry, I’ve been slacking on that series the past few weeks), but I’ve been a bit obsessed with this ’80’s hit by the Cure today and had to go ahead and post it now.  Enjoy!

NarCissistic Mary’s indie rock songs have all been very popular on this blog and I want to help her get as many views as possible. Here is her latest, a slower tempo song called “Illuminating Dreams.” Please share!

I’m posting this on a Sunday because I feel like it and it’s close enough to Monday anyway.

“Boulevard of Broken Dreams” was a huge 2005 comeback hit by the alternative/pop-punk band Green Day after several years of being out of the public eye. It’s one of the last great rock & roll songs in the wilderness of dreary post-grunge and r&b/hip hop that dominated the airwaves prior to the changeover to EDM and pop around 2009. “Boulevard” has special meaning for me because of the connection it has with Borderline Personality Disorder. I think it captures the horror and emptiness of what it feels like to have BPD, especially these lines:

I was going to post a different (more recent) song for this week, but my DS, who will be 25 this year, just reminded me that this iconic song is as old as he is. It still sounds as great as it did in 1991. Sorry about this being a day late.

While watching the video for this week’s Monday Melody, “All the Young Dudes,” Youtube directed me to this song (which in some ways is very similar, at least in sound). I played it of course, and couldn’t get it out of my mind, so I’m posting it as a second entry this week. For me, this song has a story attached to it. 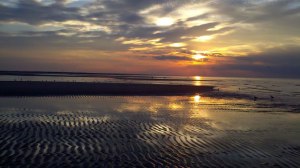 It’s a song that brings me back to one of my few happy childhood memories. It was the summer of 1967 (the Summer of Love to those of you about a decade or more older than I was). I was about 7. My parents and I were spending a couple of weeks living in a rented house on Cape Cod Bay (East Brewster, Mass.), where every day I’d be able to walk out about a mile onto the sandbars and collect shells and hermit crabs in a plastic bucket.  I wouldn’t return until the tide began to come back in (and it came in so quickly sometimes I had to run back!)   Before outracing the tide I’d set the hermit crabs free.  My 12 year old half-sister, who I idealized as some kind of goddess (she was everything I was not), had joined us for those two weeks (she was my mother’s daughter but she only lived with us for one year in 1971).

At the end of a busy and carefree day on the beach, I remember the two of us sitting out on the screened porch that overlooked the bay, our skin still hot to the touch with sunburn (and in my case, covered with mosquito bites), drinking Coke from tall frosted-plastic tumblers and eating potato chips.  A tinny transistor radio was tuned into the local Top 40 station. The water of the bay gleamed like molten bronze under the setting sun, and a Citronella candle burned on the metal mesh table. Mosquitoes bounced against the rusted screen that separated us from the salty sea air and occasionally fried themselves in the bug zapper that hung from the worn wooden rafters that had turned gray with salt and age. Procol Harum’s “A Whiter Shade of Pale” emanated from the tinny radio. I was in heaven. To this day, whenever I hear this song, I’m taken back to that long ago summer. What a different world it was back then.