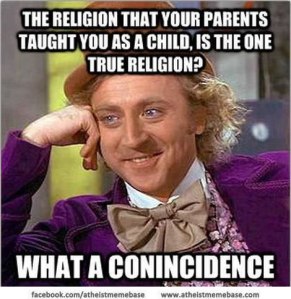 I came across a fascinating post over at Godless Cranium’s blog. Although I’m not an atheist, I always find his posts thought-provoking and he raises a lot of great questions. This one really got me thinking.

Until recently I’ve been agnostic, and I still have a lot of agnostic views. I don’t expect those to all change any time soon. But this week I decided to become Catholic. I know, I know, a lot of you are thinking, WTF? Why would you choose such an ancient, archaic, bloated religion that has a violent past full of hypocrisy, bloodshed and immoral practices such as people being bilked out of their hard earned money to get someone out of Purgatory? I have my reasons. If you’re interested in why I chose this faith over others, you can read the two posts I wrote a few days ago.

That being said, do I think the Catholic church is the “right” religion? Not really. It may be all wrong for someone else, but for a number of reasons, I think it will work for me. Catholics actually believe all Christians are going to heaven, and some non-Christians who do good works are going there too. I like that. But they still have their doctrine that holds that it’s much, much better to be a Christian, even a non-Catholic one, so a non-Christian’s chances of getting to heaven still aren’t very good.

Muslims believe they are the only ones going to heaven. Allah will save a faithful Muslim but everyone else, including all Christians, will go to their version of hell. What if they are right? I mean, they could be, right? They are as convinced as any Christian that their Allah is the One True God and believing anything else is heresy.

Closer to home, many fundamentalist Protestant denominations think only members of their particular denomination will go to heaven. There are about 30,000 Protestant denominations. Which one is right? Then of course there are the offshoots of Christianity that don’t really fit into traditional Christianity–Jehovah’s Witnesses, Seventh Day Adventists and Mormons come to mind. Without exception, they all believe their faith is the one true religion and only their Bible is the correct one.

There are the non-Abrahamic religions too–Buddhism, Hinduism, Taoism and other eastern religions, as well as Wicca and various forms of paganism and shamanism, not to mention Scientology and Santeria. Even though they don’t worship the western God and don’t use any version of the Bible, their adherents all think they’re right. Who is to say they aren’t?

Who is right? Is anyone right? Maybe the atheists are right and there is no God or afterlife at all.

None of us will know for certain what will happen until we die. If we are just annihilated at death we will never be surprised there is no God waiting for us at the pearly gates because there will be no consciousness to draw such a conclusion. Perhaps reincarnation is what will happen. I can imagine many evangelical Christians being gobsmacked when they realize the Buddhists were right all along. Who’s to say? There are some very good arguments in favor of reincarnation. There are even some Christians who don’t think the idea of reincarnation can’t be reconciled with Christianity.

My head is swimming.

Maybe what happens is whatever we believe will happen. If you’re a good Christian and believe you will go to heaven, then better start shining that halo. If you’re a miserable person who thinks you deserve fiery torture, then to hell you go. If you worship Allah and believe you have pleased that God, then expect Arabic to be spoken in heaven. If you’re a Jew you will find the promised land. If you’re a Buddhist get ready for Nirvana (but be ready for a few more thousand earthly lives first). If you’re a Scientologist, L.Ron Hubbard instead of Jesus will meet you at the gates. If you’re an atheist you may be surprised you aren’t annihilated after all, but what to do then? It might be nice to be free of an earthly body, but you’ll have to decide on some sort of afterlife for yourself. Maybe if you don’t believe in anything you’ll spend eternity floating around aimlessly here on earth. Maybe ghosts are really confused atheists who have passed on.

Is it possible everyone is right and there is no one true religion? Because if only one of them was right, wouldn’t there be a way for God to show us slow-witted humans which one was the One True Religion, while identifying the rest as false? Answering “The Bible answers this” doesn’t cut it, because so many groups of Christians can’t seem to agree. Even those that use the same Bible can’t agree on how to interpret many of the passages. Then of course there are different translations of the Bible and not all are exactly the same. Some even include extra books (Catholics and Mormoms) that are considered heretic by other Christians. And of course, the Muslims can counter any Christian argument by smugly stating, “It’s all here in the Q’uran.”