On Saturday night, my son was at a convention for furries in Orlando where he competed in the dance competition. He and his friends worked on this for months. My son did the choreography. Here is the result. Unlike his other dance performances, this one tells a story.
The judges must have liked it since they placed second again!

My son as “Mex” in the center of the group.

My son performs tonight in the dance competition at Furry Weekend Atlanta (FWA) in Atlanta, GA. He found out two weeks ago he was put in charge of doing the choreography for a group of five dancers, including himself.

He didn’t want the responsibility but wasn’t given a choice (the original choreographer quit and put him in charge), and he’s been really stressing about it. His group competes tonight–the competition will begin at 9 PM and runs for about 2 hours until the winners are announced.

I don’t know the name of his group or what order they’re performing in, but he is “Mex” and will be most likely wearing red plaid shorts and a black T-shirt that says, “I’M KIND OF A BIG DEAL.” He always wears that uniform, lol. 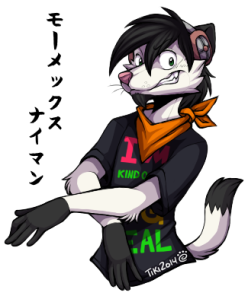 If anyone is interested in watching the competition (it’s a LOT of fun), you can see it live-streaming on furryweekend.TV — I watched yesterday and the video quality is excellent.

Whether you watch or not, please extend your prayers, well wishes, and send positive energy that everything comes together for my son and his group tonight. He’s a little disappointed right now because this time around, he didn’t make the finals for the solo dance competition.