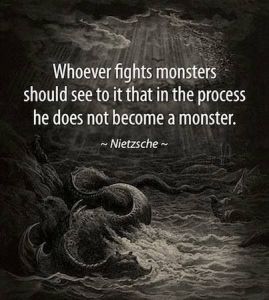 There is nothing wrong with anger when it’s needed. Righteous anger is a normal human emotion and helps us survive. When we are faced with danger, unfair treatment, or have been attacked (either overtly or covertly) by dangerous people, it’s normal to feel rage and anger. Anger is a stronger, more proactive emotion than fear, which it normally overrides if it’s powerful enough. Fear keeps us stuck in abusive relationships. Righteous anger is the only emotion that can give a normally fearful abuse victim the motivation and drive to leave their abusers and/or take action against them. All this is perfectly healthy and anything less than that is bound to keep you stuck in an abusive, codependent relationship.

But some people, especially those who suffered horrendous abuse by their own parents or caregivers who were supposed to love them, cannot let go of their rage, even after they go No Contact. That’s understandable, especially if their lives have been ruined due to the abuse they endured. But chronic rage isn’t healthy or helpful. Staying in a state of unrelenting, permanent anger is physically, mentally, and spiritually dangerous because it continues to fester and build on itself long after any immediate danger is past. Chronic rage destroys the body by releasing unhealthy levels of cortisone (the fight-or-flight hormone) into the blood, and this can lead to high blood pressure, headaches, heart problems including heart attacks, and a host of other medical problems. Anger is bad for the body when it’s chronic. High levels of cortisone brought on by rage are meant to be temporary and allow the person to confront or escape; otherwise it’s a poison.

Chronic rage is mentally and spiritually dangerous too. It festers away inside a person and causes them to become bitter and toxic to themselves as well as to others. It prevents a person from ever being able to feel true happiness or enjoy life. Chronically angry people are hard, unforgiving, bitter, cynical, easily enraged, and in great danger of becoming narcissistic themselves. I’ve become sadly aware of this sort of thing happening to some victims of abuse. That’s why I don’t think people should remain in a state of chronic anger, if it’s at all possible for them to move away from it. A good (non-narcissistic) therapist can help–or a pastor, rabbi or priest, or even a mature, empathetic non-angry friend if a competent therapist is unaffordable.

Letting go of rage doesn’t mean loving, enabling or forgiving your abusers. It doesn’t mean “hugging the narcs” or feeling sympathy for them, if you’re not so inclined. Letting go of anger when the danger is past is simply a step toward health and healing. The sort of unrelenting, chronic anger I’ve seen so often that keeps people stuck in a mentally dark place even without their abusers present can become a form of self-abuse. In essence, their abusers are continuing to destroy them even if they are no longer in contact.

Chronic, unrelenting rage can turn formerly good people into exactly the kind of people they hate the most–narcissists. They may not be aware this is happening to them, but others can see it. This is also one of the reasons why narcissism is so contagious and is sometimes compared to a communicable disease. Abusive, malignant narcissists can easily turn a person into one of them. Even Henry Rollins said so.