I dragged up this old post just in time for Christmas! No one seems to remember this toy. It’s not too hard to understand why. 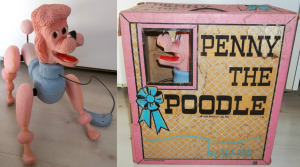 Christmas, 1966.   For months I’d been begging my parents to buy me the hottest new toy the commercials were telling me I just had to have: a walking, barking dog called Penny the Poodle.  Even if you’re old enough to remember this horrible toy, you may not, because it was quickly forgotten after the initial pre-Christmas hype.    I’m sure millions of small children spent that Christmas Day in tears of disappointment and frustration when they realized Penny the Poodle did NOT live up to the hype.

Here’s the commercial, which in retrospect, was pretty creepy, even for those days:

I remember unwrapping the large box with joyful anticipation, ripping off the green and red foil paper and bows to reveal the “Penny the Poodle” logo and the see-through window on the side of the box that revealed Penny’s Pepto-Bismol pink head.

Eagerly, I pried her out of the…

6 thoughts on “The worst toy I ever had.”