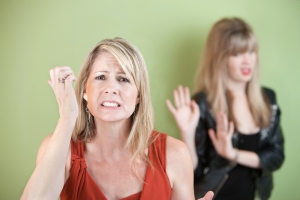 My daughter is either a somatic histrionic narcissist (same as my mother) or has borderline personality disorder (BPD) in addition to diagnosed PTSD and bipolar disorder. She would be somatic if she’s got NPD because she’s obsessed with clothes and shopping and she takes more selfies than every Hollywood starlet put together in one room. She’s very attractive and she knows it and has been able to use her looks to get what she wants, at least from males.

But due to her intense mood swings and the fact she does show some empathy and remorse, then she’s also likely to be be a borderline, a related Cluster B disorder which is more common in women than in men (narcissism is more common in men) but has much in common with NPD. Whatever she is, she’s a high maintenance drama queen. I’ve joked with her that she’d be perfect for a reality show like “Bad Girls Club,” but to be honest, I could definitely see someone like her on a show like that!

Of course I love my daughter dearly and enjoy her company too (she can be a lot of fun and easy to talk to, which is why she makes friends easily) but her disorders definitely make her difficult to deal with, especially now that she’s moved back in with me.

She has been home for almost two weeks. Things have been going swimmingly (okay, maybe that’s a slight exaggeration) and there have been no real problems. I read her the riot act on her return and she agreed to some new rules. She does not appear to be doing drugs and is taking steps to get her life in order, including seeing a therapist this week. I told her if I saw pain pills or any other evidence of hard drugs, there was the door.

But tonight she invaded my boundaries. She had gone to the mall with some friends, and came home in an upbeat mood, which was fine, but my daughter also gets a little obsessive and impatient when she’s excited and happy, and has a bad habit of not respecting my boundaries. I also think she’d had a drink or two.

Because there are only two bedrooms (my roommate has the other one) and I took over Molly’s bedroom when she had moved in with Paul (and I won’t give it up!) she has been having to sleep on the couch in the living room. She’s turned it into a large bedroom and it actually looks nice, if a bit cluttered. I almost never have company anyway, so it’s not like I really need a living room.

But tonight when she got home at about 10:30 she wanted to pull some more of her things from my room (things she never uses and didn’t need tonight). I told her it was late, I have to be up early for work (and to drive her to the DMV) and I needed some alone-time before going to bed. I needed time online too. As an Aspie, she knows if I don’t get my “alone time” I get very cranky and snappish. I do not like my Aspie routine to be interrupted. She knows this well.

But she kept rummaging around in all the drawers and pulled boxes out of the closet, tossed shoes and bags and papers and stray clothes all over the floor, messed up my things in the process, and was making a racket doing so. I must have told her three times or more to please do this tomorrow, but she wouldn’t listen and kept saying “one more minute!” But it wasn’t one more minute, it wasn’t three more minutes or five or twenty: this shit went on for almost an hour. I was ready to scream and pull my hair out.

When she finally finished tearing my room apart looking for her things, she took them into the living room. Then she decided she needed to find a place to plug in her humidifier (she suffers from dry sinuses and mild asthma). She proceeded to start unplugging things from the wall, including the damned router. It took me another twenty minutes to get connected to the Internet again. I actually burst into tears of frustration (the kind of tears I shed more than any other kind–it’s almost impossible for me to cry when I’m sad).

It wasn’t that this was something that couldn’t be fixed easily, but I’d had more than enough. I was so stressed and completely frustrated with my daughter and the chaos she was creating and the boundaries she was violating due to her inability to wait for anything. She wants what she wants when she wants it.

In a near rage, tears streaming, I’m afraid I snapped and told her I wished she never moved back in because she had no respect for my boundaries or anything else. She started to cry, and I told her I was sorry and apologized. She asked me if I really meant what I said and I told her no truthfully. I explained again why I need my quiet time at night and why it was a bad time for her to decide to redecorate. She said she understood…but does she?

9 thoughts on “Respect my boundaries!”