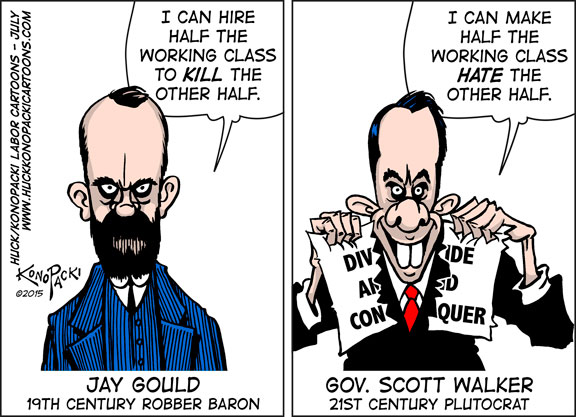 This cartoon clearly shows how Divide and Conquer works.

I think my experience as a survivor of narcissistic abuse and my subsequent “crash course” in how this type of abuse works (which is the original reason I started this blog)  is the primary reason I am now so aware of the narcissistic abuse that the Trump administration is inflicting on America and the whole world (and yes, that even includes his supporters, who are codependent to him as they would be to an abusive spouse or parent — or are suffering from Stockholm Syndrome).

One of the Machiavellian tactics used by malignant narcissist Trump and his equally sociopathic regime (and it IS a regime, which is why I call it that)  is Divide and Conquer.  Malignant narcissists and other Dark Triad people use D&C as a way to manipulate and control their marks.  Dividing people works, because it’s easier to take control over them when they are not united as an opposing force because they are too busy fighting each other to see the real danger right in front of them.

There are many examples of Divide and Conquer used by the Trump regime, but some are less obvious than others.  Rallying his supporters to hate journalists and the “fake news,” or using racist dog whistles to rile up his base against “the Other”  are more obvious examples that can be fairly easily detected by anyone who follows the news and is against the Trump regime.

One of the less obvious D&C tactics are insidious ploys to divide “the left.”   I need to mention here that “the left” is no longer limited to latte sipping East Coast intellectuals and artists, socialist Millennials, and pot smoking aging hippies.   It now refers to anyone who is against Trump and his regime.   We are at a point in history where even moderate conservatives who oppose this president (the so called “Never Trumpers”) are now part of “the left.”  George W. Bush could be considered a leftist now — that is how far right the Overton Window has moved in recent years.   But I digress.

In the past few days, I have noticed a smear campaign being used against Democratic Minority Leader Nancy Pelosi.  Liberals and Democrats on Twitter have been arguing and fighting amongst themselves (even blocking other people on the left who otherwise agree with them politically), over whether Nancy Pelosi should keep her job in the House or be replaced with someone younger and “more relevant.”

It turns out this smear campaign was started by the GOP and specifically Trump, who constantly tweets derogatory and inflammatory things about her, knowing she is controversial to people on the left to begin with.   Here is a tweet from the other day that seemed to be the catalyst for the current discord:

Democrats, please do not distance yourselves from Nancy Pelosi. She is a wonderful person whose ideas & policies may be bad, but who should definitely be given a 4th chance. She is trying very hard & has every right to take down the Democrat Party if she has veered too far left!

What he’s doing is taking advantage of the fact Pelosi is already controversial to divide the left even further and create deeper discord and division.  His goal is to provide a distraction from the real damage he and his regime are doing while simultaneously making the left lose focus on who the real enemy here is — and it is not Nancy Pelosi.

This is a sneaky and insidious way to divide (and subsequently conquer) Trump’s enemies and it’s being used because IT WORKS.    It’s so insidious that unless we have received an education in how to spot narcissistic abuse and Machiavellianism, we may not even be aware that we are just marks being used and manipulated by a sociopathic leader for his own benefit.

That Trump is using a common technique known to abusers and malignant narcissists is as obvious to me as the sky is blue, but it may not be so obvious to others not familiar with how narcissistic abuse works.    I recommend people opposed to Donald Trump and his regime read The Sociopath Next Door by Martha Stout.  This blog also features many articles about narcissistic abuse, or if you prefer, just Google “narcissism” or “narcissistic abuse” to find other blogs, articles, and resources about this pervasive problem that begins in families and between individuals and works its dark magic all the way up to our highest world leaders.

14 thoughts on “The Divide and Conquer tactics used by the GOP to divide the left.”