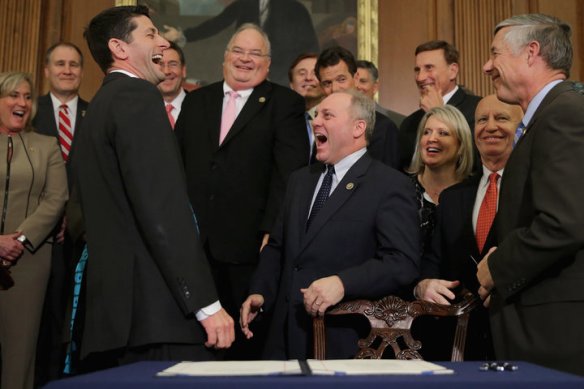 The above photo, taken at a beer party celebrating “Trumpcare” passing the House last May, drove home to me exactly how cruel and sadistic Trump’s people really are.   It hit me like a ton of bricks.  They are literally laughing over millions of people losing their healthcare.

Since the very beginning of his term, Trump has surrounded himself with people who seem to lack empathy, conscience, or any sense of morality or scruples.    The good people left this administration early on, or were fired.   Later, those people who weren’t so good, but who still had some semblance of a conscience or morals lost their jobs or resigned.

By a process of attrition, Trump’s cabinet is now almost 100% sociopathic.    Trump doesn’t seem to care if the people who work for him care about We the People or have any sense of right from wrong or duty to the country.  In fact, it’s better for Trump if they don’t.   All Trump cares about is their loyalty to him.      Never do you see a shred of empathy from any of these people.   Human suffering doesn’t seem to bother them.  In fact, they seem to delight in causing it.   They never apologize or admit wrongdoing.  In fact, they’re very likely to project their own wrongdoings onto others, smearing and gaslighting innocent people and groups.  Their greed, sense of entitlement, arrogance, and selfishness is bottomless.   We have grifters like Scott Pruitt, whose outrageous and illegal fleecing of the taxpayers for his own self-benefit and entertainment may rival or even surpass Trump’s own.   As if it’s not already bad enough he’s ruining the environment and destroying the EPA from within (which is entirely intentional).   And yet he keeps his job.   In fact, Pruitt may be the one who gets to fire Bob Mueller should Trump fire Jeff Sessions.

All of the people working for Trump, based on their actions and words, seem to have one of the Cluster B personality disorders, most likely NPD, Antisocial PD (sociopathy), or psychopathy.    Many of these people are likely malignant narcissists, like Trump himself.  They serve as his flying monkeys and yes-men.

There may be one or two non-disordered people left in the administration, who have severe problems with codependency and therefore have some pathological need to be pleasing to Trump, but I think even most of those people have been fired.  People with normal levels of empathy, who don’t feel entitled to cheat and steal, who care about the rule of law, and who have any integrity at all are nonexistent in this administration, and that is scary.

Their one saving grace is it’s fairly easy to identify them.

You can see it in their faces.

One thing I’ve noticed about Trump’s cabinet members, his most fervent sycophants and enablers,  his three elder children, and many Republicans who support this president is the deadness in their eyes.    Their eyes are cold, hard, and flat.   Sometimes they appear black, as if they are lacking irises.  When they smile, the smile doesn’t reach their eyes, making the smile appear mocking or threatening, or at the least insincere.

NRA spokesperson Dana Loesch showing those cold, dead, black eyes.  Her expression is constantly angry and hate filled.   I strongly suspect malignant narcissism.  Coupled with those eyes that look like miniature black holes, her overall appearance is extremely intimidating — and that may be the point of using her in their ads.

Jared Kushner has possibly the deadest looking eyes I’ve ever seen on a living person.  He literally looks like he’s dead.   He sold his soul a long, long time ago. Trump’s three oldest children also have the same dead look, though not as pronounced as Kushner.

A few of these people, rather than having those dead reptilian eyes, have eyes that sparkle with psychopathic glee, and they often wear a smirk, especially when they know their policies are hurting others (I’m looking at you, Paul Ryan). 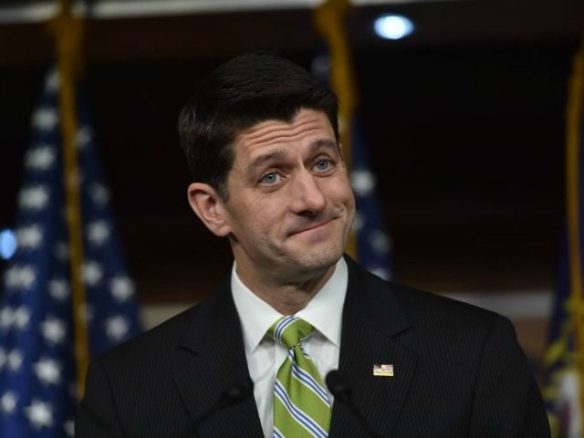 When is Paul Ryan ever not smirking?   Sometimes I think it’s his only facial expression.

Trump himself has eyes that are so scary I really can’t look at them.   I can’t even look at his face anymore, because I feel evil emanating from the image itself.   I feel like something in my soul is being eaten every time I have to look at him.    Malignant narcissists like Trump get worse over time, especially if they are given access to a great deal of power and influence.  Narcissistic supply is like a drug that increases the malignant narcissist’s need for even more adulation and worship.  As they try to consolidate even more power, their malevolence increases, and this can be chillingly seen in Trump’s facial expressions over time.   He never laughs.  When he smiles, which is rare, his smile is fake and never reaches his eyes.  Most of his recent photos are like this one, showing a combination of malevolence and childish petulance.  Others show him looking as enraged as a rabid dog, especially the ones taken at his hate-rallies.

Jack Brown, MD, is a physician who is an expert in reading body language and facial expressions.     He said there is a particular expression that sociopaths and malignant narcissists use much more frequently than normal people: what he calls the Elevated Central Forehead Contraction with a Partial (Insincere) Mouth Smile.  It’s a closed mouth, fake smile with the eyebrows drawn together as if the person is frowning.  It’s similar to a smirk, but not quite.  The overall effect is  mocking condescension and cruel contempt.   Brown says this expression is used often by serial killers, mass murderers, hardened criminals, and by everyday bullies and other people who lack empathy.

Here’s a very obvious example of this expression on hedge fund manager and convicted felon Martin Shkreli (the guy who became infamous for jacking up drug prices to ridiculous rates, making them unaffordable for most people).  He used it continuously while on trial during questioning. 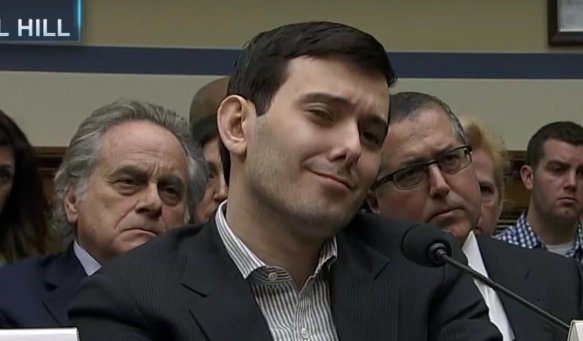 Here is the same expression, on Trump (who seems to use it quite frequently):

Brown says the ECFCWPMS is a default expression for Vladimir Putin (it’s a lot more subtle on him but is ever-present).  Putin appears to be a pure psychopath, rather than a malignant narcissist (which is why Trump looks up to him and tries to curry his favor).  Pure psychopaths are “stronger” than “mere” narcissists, who have that pesky neediness and emotional vulnerability that bring them so much shame.

Stephen Miller (below) combines a cruel smirk with the reptilian dead eyes.  I think of him as the Joseph Goebbels of the Trump administration.   Trump naturally adores this guy and will probably never fire him.

If you are face to face with a sociopathic personality, you may feel as if their eyes are boring into your soul.   This is because they are human predators — they are sizing you up as potential prey and victims.   On a date or with a new person, you may feel as if the predatory stare indicates sexual or romantic interest. Failing to make the distinction between the predatory stare and sexual/romantic interest leads many a woman (and man) into dangerous and abusive relationships with people who live only to use other people because they don’t see them as fully human.

Another thing I’ve noticed is several of the women in the Trump administration, especially those whose job requires them to lie constantly to the public, attain a facial asymmetry that gets worse over time.   It also seems to age them faster than normal.  I don’t know if there’s anything scientific behind this phenomenon, but I have come to believe that constant lying will do this to your facial features.  If you want to retain your physical beauty, then, tell the truth!   Lying is, apparently, bad for both your soul and your physical appearance!

Huckabee Sanders looks like this whenever she’s lying.  Her eyes literally focus in two different directions and is very unsettling.   She’s only 35 years old but looks like she’s in her 50’s.  She has aged visibly since she took this post.

Can you trust a face that looks like this?   Constant lying has apparently done this to Kellyanne Conway’s face.  She used to be a fairly attractive woman until she took her job in the Trump administration.

The other day I read an article that said there is a new bill the GOP is trying to pass that will require a photo of Trump (and Pence) to be hung in every Post Office.   That’s something dictators do, not leaders of democracies.   Isn’t it bad enough we are daily inundated with sound bites and constant images of this president?  We can’t get away from him.  No other president has dominated the media, our conversations, our thoughts, and our very lives the way he has done.
What’s next — requiring that every American household hang a photo of Dear Leader in a conspicuous place, like they do in North Korea?

For the sake of our own souls, our nation, and the world, learn to identify them.

20 thoughts on “Sociopaths rule America — but there’s an easy way to identify them.”