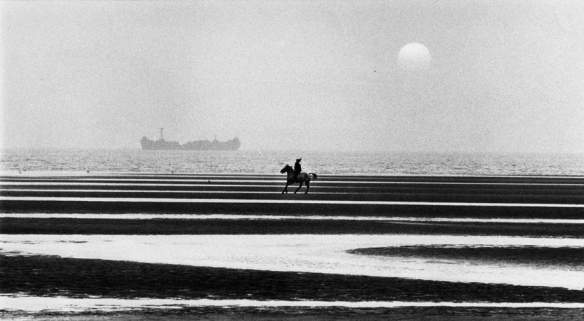 Credit: Unknown photographer.  This haunting photo is very similar the way the old battleship appeared to me as a child.

I have a vivid memory of myself as a mosquito-bitten, golden-tanned and skinny little girl of seven and eight years old happily playing and exploring on the the tidal flats of  East Brewster, along Cape Cod Bay in Massachusetts, where my parents had rented a vacation beach cottage for two weeks during two consecutive summers in the late 1960s.

The sandbars and  network of warm tidal pools and rivulets left behind by the retreating tide stretched far, far into the distance–so far that the deeper water where the sand was never exposed was only a thin royal blue line against the horizon and sometimes was not visible at all  (I read recently that the Brewster tidal flats actually can extend up to two miles at low tide).

I played out on the flats for hours, collecting hermit crabs in my orange plastic bucket and then setting them free.  I marveled at how fast the incoming tide moved–so fast my friends and I used to try to race it in. I recalled sunsets seen from our screened in porch, painting the tidal pools pink and orange, and the smell of citronella and the sound of the bug zapper as the armies of mosquitoes dodged into it. 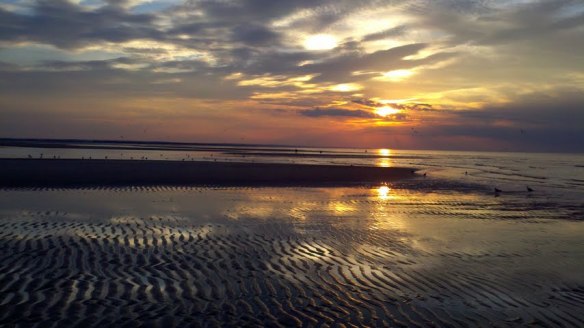 Way out on the horizon, so far away it appeared more like a mirage than a tangible thing, was the shadowy outline of a battleship.   I remember gazing out and wondering where it came from, why it never moved,  how far away it actually was, and even whether it was real at all.   It didn’t appear quite solid; I could see none of its details, and often it was shrouded in fog that was sometimes so thick I couldn’t see it at all.   Even on clear bright days, the ship seemed to shimmer in the sun like a mirage, or like the ghost of a ship that had foundered and sunk years earlier.

The ship seemed strangely alive though.  I was drawn to it.   I wanted to know its story.    I knew it had a story.  I remember asking my parents about it but they just said they had no idea.   The ship wasn’t important to them, but it was to me.   When we went to Provincetown one day, I looked out over the bay in the direction from which we had come to see if I could see my ship from a different perspective.  I was disappointed that I could not.   It was too far away and out of my line of vision.

My questions remained unanswered.   We had not taken any photos of that ship, so all I had was my memory of it.  After that second summer, we never returned to Cape Cod Bay.     Life went on, my parents divorced, we moved to the city,  school became more demanding, things like dating and making friends consumed my redirected adolescent attention.   Years and then decades passed by, and I never thought about the ship except as a random passing memory before turning my attention to more important things. 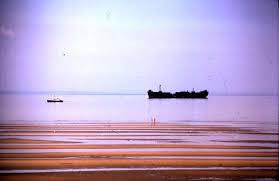 Another ghostly image of the Target Ship in the far distance. (photographer unknown)

But about a month ago, that changed.  One day the memory again filtered through to my consciousness, as it sometimes does as a matter of course.   But so many decades had passed since those two distant summers that the memory itself has faded and I was no longer even sure it was an actual memory or perhaps just a dream or figment of childish imagination.

The Internet has made it possible to find the answers to obscure questions that in the recent past remained forever hidden in the darkness of the unknown.   So this last time I remembered the ship, I decided to Google it.   I didn’t expect to find anything.

So imagine my shock and delight when I typed in “abandoned battleship in Cape Cod Bay” and clicked on Images and saw THE SHIP almost exactly as I remembered it as a child standing out on those long-ago tidal flats gazing at the horizon.   There it was, right there on the screen of my laptop:  its ghostlike hulk like a mirage against the distant horizon, way out beyond the flats.  My jaw almost dropped to the floor.   Was my 50 year old question finally going to be answered?  Was my memory a real memory, and not just a dream?

My ship had a story, and she had a name:  The SS James Longstreet.  According to Google, she was a World War II battleship, constructed in 1942 by the Todd Houston Shipbuilding Company in Houston, Texas.  She measured 417 feet in length and 57 feet in breadth.  Her namesake, Major General James Longstreet, had been a hero of the Confederate Army and one of General Robert E. Lee’s top officers during the Civil War.   She was moored in the Cape Cod Bay off Eastham at the end of World War II and her remains can be found there today.

SS James Longstreet (Hull Number 112) was a Liberty ship [a cargo vessel built to carry supplies to Allied troops] built in the United States during World War II at a cost of $1,833,400. She was named after the Confederate general James Longstreet.

She was laid down on 3 December 1941, then launched on 2 April 1942. On 26 October 1943, she ran aground in a gale and was declared a total loss. Instead of being scrapped, she was acquired by the US Navy in June 1944 and used as a target ship for early air to surface guided missiles. Whilst under tow to and from the target areas, she once ran aground and on another occasion broke her anchor chain and drifted for ten days before being recovered.    She was then sunk and used for further experiments using missiles, before then being used for live ammunition target practice by Naval jets from nearby South Weymouth Naval Air Station and the Air Force from nearby Otis Air Force Base  until 1971. The ship is also referred to as the “target ship”.

The remains of James Longstreet lie approximately three and a half miles off  Eastham, Massachusetts in 20 to 25 feet (6.1 to 7.6 m) of water. The site is off limits to divers.

And there it was.   It was much more than I expected.

Going by the relatively intact look of the ship, I’m guessing this was taken earlier than the 1980s (most accounts say it was mostly disintegrated by 1982)

But that wasn’t all.  Another article, from The Cape Cod Times, said “The Target Ship” had become so badly rotted and damaged by rust and algae, and the constant bombardment by practice missiles, that in 1997 she finally broke apart and sank for good.  1997 was the last year she would have been visible to a child standing out on the tidal flats the way I had thirty years earlier. 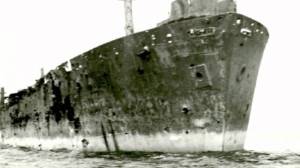 The “target ship” riddled with holes from years of attacks.

Of course I felt drawn to her.  Of course she haunted my dreams.   I related to her plight as an abuse survivor, as a child who constantly felt misunderstood and unappreciated by her own family, and unfairly maligned as a loser, a child who had opportunities ripped away, was used for emotional (and sometimes physical) target practice, and was finally emotionally abandoned by those who were supposed to always be there no matter what.   James Longstreet had been built, didn’t perform to standards, and was never given another chance to prove herself.  Instead, she was cruelly chained down where she couldn’t escape and used for target practice for half a century — only to be abandoned and left to rot and die where no one would ever see or remember her again.

Of course, intellectually, I knew the SS James Longstreet was just an object, a hunk of rusted iron manufactured by men for wartime.   She had no heart or brain or soul.  But in a sense, she was me, and for five decades she called out to me through my memory, yearning for her story to be told.

That’s the least SS James Longstreet deserves and so I have done this for her. 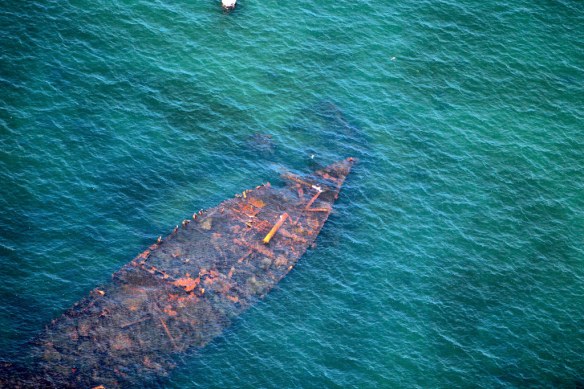 View of the James Longstreet after she went under for good.

Memories of the Target Ship in Cape Cod Bay

16 thoughts on “The mystery ship.”