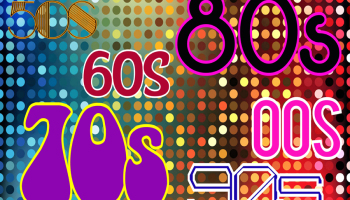 I saw this quote today and it made me think.

The 60’s, 70’s, 80’s, and 90’s seem to have all separate, unique personalities, but these last 18 years seem to just be one big chunk of time that has no significant meaning.

Personally, I think decade “personalities” reach back all the way to at least the 1920s.  Although I have no real point of reference for chunks of time earlier than that,  I suspect the growth of mass popular culture (movies, radio, mass produced clothing, magazines, etc.) due to the advance of technology during the early to mid-20th century had a lot to do with the decades developing their own unique “feel.”

It wasn’t just music, entertainment and fashion that defined decades from each other; decades even had their own unique fonts.  You can pretty much tell the vintage of a magazine or paperback book heading or a movie poster by its font.  Colors (and color combinations) and patterns are also telling:  1940s: dark jewel colors; 1950s: aqua and pastels, gingham and boomerang patterns; 1960s: DayGlo colors, paisley, and psychedelic patterns; 1970s: earth colors (specifically, all shades of brown, harvest gold, avocado, and rust); 1980s: mismatched DayGlo colors and clashing abstract patterns, and of course, mauve and hunter green (for home decor); 1990s: the “distressed” look for furniture,  plain white walls, black clothing, tiny floral prints on black backgrounds, heather gray, brown, and lots of plaid flannel.  The 2010s do seem to be defined by the popular “lattice” and oversize houndstooth patterns you find on everything from throw pillows to blankets,  but I can’t think of much else that defines it, other than political statements like MAGA caps or pink pussy hats.

The decades as we think of them don’t generally (or ever) start on January 1 of a new decade.  They could start early, or it could take several years for the next decade to really get underway.  It also isn’t until some years after it began that we actually notice that things changed (that’s why the decade you’re currently in doesn’t seem to have its own personality).

For example, the “sixties” didn’t start until about 1964, with the rise of the Beatles (or possibly, in late 1963, with the assassination of JFK); the “seventies” didn’t begin until sometime in 1974, when early Disco/Philly sound emerged out of earlier funk and R&B; and bell bottoms, Earth shoes and sandals, long straight center parted hair, and long peasant dresses (all more associated with the sixties) suddenly gave way to platform shoes, polyester leisure suits, and sexy Lycra  “disco dresses” in jewel colors.    But it wasn’t until the end of the ’70s, or even the early ’80s, that we realized exactly when the “seventies” started and the “sixties” ended.

The “eighties” started more or less on time (or even early), because disco and its culture had a short run and was replaced with New Wave and power pop music as early as 1978 or 1979.  The eighties ran until the fall of 1991.  The rise of Nirvana and other grunge bands from Seattle commenced the nineties.  Overnight, Generation X was cool and Boomers were just old.  I remember the switch to the nineties well, since I gave birth to my son the very same month “Smells Like Teen Spirit” was released, and I remember telling my husband on first seeing the video on MTV, “That song is going to change everything.”  I have no idea how I knew that.

But what happened since the new millennium began?  Why, almost two decades after the year 2000 began, does that decade still seem to have no personality of its own? Why does there seem to be no clear cut off between the late ’90s, the 2000s and 2010s?

Obviously, we are far enough into the 21st century that at least its first decade’s personality would have emerged some time ago.  So it’s not because we haven’t waited long enough.  Now, that could be the case for the 2010s (which we are still in but not for much longer) but not for the 00’s.  But I suspect the reason is something else entirely.

Since 9/11, there’s been a change in the national zeitgeist, a darkening of the overall mood.   People are more suspicious of each other and of the government, and the overall mood is one of distrust and dread.   That distrust and dread, sparked by 9/11, is what led to Trump and the rise of hatred and nationalism, and the disintegration of American democracy.   Pop culture — music, fashion, movies, art, and youth movements — all the things that have traditionally defined the decades take a secondary role to survival itself.   A society that is not thriving doesn’t really care about frivolities, pop culture, and being entertained.  During dark times, people tend not to create a new culture; instead they draw from the past and become nostalgic for happier, more stable and prosperous times.

There’s another reason for the lack of definition of recent decades, one which may be even more important than the darker national zeitgeist.   Technology has continued to advance, to the point that every person can customize their own entertainment.   Up until the 1990s, people tended to listen to the same songs on the radio, watch the same music videos, and shop at almost identical malls scattered across the country.  A mall in Miami was pretty much the same as a mall in Minnesota.  There weren’t 1000 different cable channels.  People bought physical records or CDs because of what they heard on the radio.  In general, there was less choice in entertainment (though many believe the quality was much better).   There was no internet or social media to influence individual opinion or create tiny niche cultures, the way we have today.   Now anyone can start a Youtube channel, anyone can create their own music video or short film and get their own small group of fans or followers.  Anyone can start a blog and sometimes gain a modicum of internet fame from doing so.   Your friend may listen to a band, watch a movie, or be a fan of a comedy series you have never heard of because they have only a tiny niche following on Youtube or Vimeo.   There’s also the isolating nature of today’s entertainment.   People watch videos and listen to music on their phones or iPods instead of turning on the radio for all their friends to enjoy.

And of course, many of us, overwhelmed by too many choices and not enough quality, escape into the past for our entertainment, indulging our need for nostalgia.   The unifying sense of solidarity people once experienced through enjoying a common zeitgeist is almost completely gone.  Now it’s everyone for themselves.   The disintegration of that kind of solidarity may actually have something to do with why Americans stopped caring about each other.

16 thoughts on “Why did decades stop having personalities?”