I’ve been noticing a huge and (to me) obvious difference between Trump supporters and those who oppose him.  Much has been said about the tendency of Trump supporters to have more authoritarian personalities than the norm, and that is true, but why is authoritarianism so attractive to them?  Why do they hate democracy?  Don’t they want to think for themselves?  Don’t they want to live in a free and inclusive society that values empathy for others and the Golden Rule (which we were all taught in kindergarten)?

The other day I was following a Twitter convo between some Trump supporters talking about Matt Whitaker, Trump’s new Acting Attorney General.  They were all talking about how Whitaker looked like a guy who wouldn’t take crap from anyone, and would rule with an iron fist. They admired Whitaker’s pumped up, hypermasculine physique, his cold, expressionless features, and were almost reverently comparing him to Mr. Clean (who would, of course, clean up “the swamp”).

The kind of people I observed conversing on Twitter, like all Trump admirers, don’t seem to care about the lack of checks and balances and the deep corruption in Trump’s administration.  In fact, they love the idea of Trump having as much power as he desires (which is unlimited as his need for power and adulation is insatiable), so he can push through his cruel and destructive agenda.  In Whitaker they see a tough, merciless enforcer. And yes, they actually used the word “enforcer.”

This same group was making fun of Rod Rosenstein, Jeff Sessions’ deputy Attorney General (who seems to have been demoted since Sessions was fired and Whitaker came on the scene) for his “girlish, wimpy” appearance.  One of the group even posted a meme of Rosenstein as a 90 lb weakling getting sand kicked in his face by (you guessed it) an exaggeratedly muscled Whitaker who looked like he was pumped up on massive doses of steroids.  This group was not all males.  In fact the person who posted the meme was a woman. 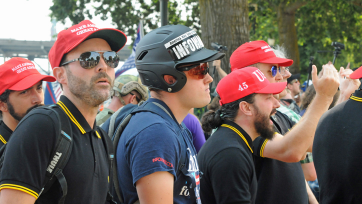 Trump supporters see the exaggerated stereotype of the “macho man” as what a “real” man should be.  Someone like Rosenstein (or any man who believes in doing the right thing, has empathy or humility, or who opposes Trump for lacking those qualities), they see as weak and  feminine, an affront to patriarchy.   Trump supporters believe a real man shows no “soft” emotions, never apologizes, is never at fault (or at least never admits fault), can break the law or do cruel things to other people as long as they get away with it or it’s a means to an end they believe is “good,” and dominates everyone who they perceive as beneath them, which is just about everyone.

In a leader, Trump supporters regard “soft” traits such as empathy or mercy, as undesirable because they are stereotypically “womanly” traits, and women are believed to be inferior to men.  I suspect most Trumpers had authoritarian fathers who demanded girls act like girls and boys act like boys.  That would explain Trump/Whitaker’s appeal among right wing evangelicals, who celebrate authoritarianism and patriarchy.   This same mindset also explains the hard right’s obsession with guns, and the primacy of the Second Amendment over all other rights bestowed to Americans in the Bill of Rights and Constitution.

Trump supporters seem to find nothing wrong with Trump’s bullying, cruel insults and namecalling and in fact seem to think it’s a plus.   Yesterday, in one of his increasingly unhinged tweets, Trump deliberately mangled Adam Schiff’s (D-CA) last name into a profanity (no need to repeat the word since I think it’s pretty obvious).   Another Trump fan tweeted this in response:

Some might say this isn’t becoming of a President. That’s ok…I didn’t vote for him because of his impeccable decorum skills. Give me a Commander in Chief that cuts thru the bull, gets things done, has a backbone, is a Patriot thru and thru, & actually keeps his word anyday [sic].

You’re not imagining things.  Trump’s followers are actually praising Trump for his puerile butchering of Schiff’s last name. They find ways to spin his worst traits and most immature, childish, and cruel actions and statements into actual virtues and good deeds.  It’s really rather remarkable the way they can so glibly make excuses for his worst behaviors.

My conclusion is this:  the values of Trump supporters involve a deep admiration, even worship, of “strongmen” figures:  hypermasculine, even abusive, men; physically pumped up, emotionless, violent, without mercy, dictatorial, punishing, and bullying.  They don’t want a president of the people, a president who brings us together as Americans;  they want a president who “sticks it to the libs” and others they don’t like. Trump shares their hates and fears, and they love him for it, even if he destroys the country we all share in the process.

Related to the above, I’ve often seen Trump supporting evangelicals talk about “Christ as a warrior,” rather than a compassionate friend. The “Republican Jesus” memes are, unfortunately, not exaggerations.  Dominionist and far right evangelicals depict Jesus Christ not as a loving figure of grace and forgiveness, but as an angry warrior out to avenge sin using the most terrifying and violent methods imaginable.  He is especially enraged by sexual sins like abortion and homosexuality (strangely, rape and adultery don’t seem to be issues, given “chosen one” Trump’s immoral sexual behavior and failure to repent or humble himself before God).  Of course, the sins of greed, wrath, exploitation, cruelty and indifference to the “least of these,” destruction of the earth, and bearing false witness are all considered fine since they are just a means to an end (establishing God’s kingdom on earth, a heretical teaching which doesn’t even appear in the Bible they’re always thumping).

Their hyper-Calvinist God favors his “elect” who apparently can do no wrong, and as a reward, he showers them with wealth and power.   For the rest of us, God exists only to mete out punishment and condemn us to eternal hellfire.   Even Jesus is seen as a violent, warlike, avenging figure, and this explains extremist evangelicals’ infatuation with Old Testament legalism and punishment over the Gospels.   The caring, compassionate Jesus of the New Testament isn’t an appealing figure for them.  A few weeks ago, at a “Religious Liberty” meeting full of extremist evangelical Republicans, a Christian preacher was taken out in handcuffs for quoting New Testament scripture (specifically, the Sermon on the Mount, Jesus’ most important and famous sermon).

Trump supporting evangelicals believe both Trump and Whitaker were sent by God to do his holy bidding (at least according to the group I observed on Twitter, who said they believed Whitaker, like Trump, was anointed by God).  The goal is to destroy all of “the liberal establishment” and by logical progression, all liberals (who I think are hated not so much because of what they believe, but because they are associated with softness and all traits they regard as “feminine” and also include a great many more women leaders and nonwhite people).

13 thoughts on “Hypermasculinity and Trumpism.”