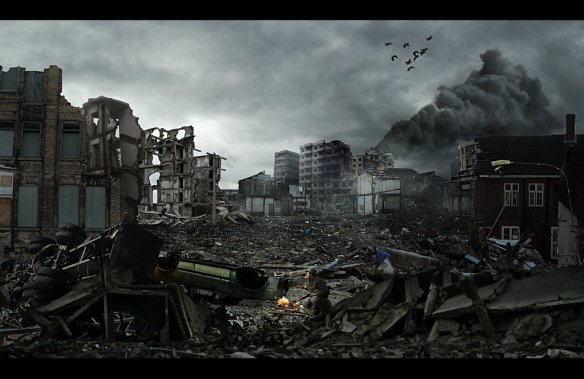 In the 1987 Cohn Brothers movie “Raising Arizona,” there was a mysterious character ironically named Leonard Smalls, a/k/a “Lone Biker of the Apocalypse. ” Smalls was a bounty hunter hired to look for a kidnapped baby, but he seemed like the worst possible choice to be put in charge of returning a child to its rightful parents:  he was hardened, violent, silent, and sadistic, and probably psychopathic.  In keeping with that, he despised anything small or vulnerable. Throughout the film, the lead character (played by Nicholas Cage) narrates several semi-prophetic dreams — including one in which Smalls tears through the desert on his Harley, shooting at rabbits, small lizards, and even struggling flowers growing along the lonely highway with grenades and huge assault weapons.

While the Smalls character was played up for humor (the movie was uproariously funny), there are actually people like him in the world.   People without a conscience, without empathy, sadistic people who will gleefully and deliberately hurt and destroy “the small, vulnerable things,” as Cage put it in the film.   There are people who live to destroy, and love every minute of it.

At first, like many people, I wanted to give Donald Trump the benefit of the doubt.  I wanted him to prove himself to be a good guy after all, or at least have a few redeeming qualities.  Like many, in the beginning of his presidency, I kept telling myself to give him a chance.    But knowing about his malignant narcissism and probable psychopathy, I knew in my bones that his heart, if he had one, was as black as coal.  He is an abuser and destroyer.

In the eight months since Trump became president, he has done nothing but destroy.  As I put in an earlier post, he brings out the worst in everyone, including his own staff and supporters.    He’s a toxic presence who smears his predecessor, his opponents, and even his own staff.  He tells lies about people that are intended to undermine them, destroy them, or ruin their careers.

Not only is he toxic to individuals, he is toxic to the nation and even the world.   Not one thing he has said or done has been life-affirming, empathetic, positive, encouraging, diplomatic, gentle, intelligent, or inspiring.   The people who still support him tend to be people who are much like he is — authoritarians, racists and other haters without empathy — or fearful and ignorant people who feel most comfortable with a strongman dictator who tells them exactly what to do.   He admires and encourages the most base and vile qualities of humanity and openly praises and curries the favor of cruel dictators.  He makes fun of the most vulnerable:  a disabled reporter, women, productive and ambitious young immigrants who came here as children, Muslims, Mexicans, the poor, and people who show any empathy or vulnerability.   He threatens and bullies reporters, politicians, and entertainers who tell the truth about him.

He passes bills that threaten to take things away from people that make their lives better.  He has gutted any funding for climate science or research and grows angry at any discussion about climate change, even after two devastating hurricanes and wildfires spreading through the western states.    He seems to like to pillage and plunder our environment, supporting fracking and selling off our public lands to huge corporations for oil drilling.   He has plans to blast off the tops of mountains for coal mining, an industry which the rest of the civilized world knows is unsustainable and practically obsolete.   He has removed laws that protect our water, air and food.

Trump cares nothing about wildlife or beauty.  In fact, it seems that he wants to destroy our national treasures and replace them with the base and the ugly.    On one of the revamped government websites having to do with environmental issues, former photographs of beautiful natural vistas have been replaced with pictures showing heavy mining equipment, people fracking, and oil rigs.

Trump’s budget cuts funding for anything that help people live better or contribute to the greater good, including organizations that combat hatred and domestic terror, while he has increased funding for for the military, the Mexican border wall, ICE agents that arrest and detain undocumented immigrants without probable cause and for indefinite periods of time and that separate children from their parents, and anything else that potentially oppresses and makes our country more dangerous, scary, or ugly.

Now he is militarizing police departments, allowing them to purchase military equipment, and removing laws that prohibit the carrying of concealed weapons.  He tacitly encourages police brutality by pardoning a sheriff known to use torture to keep prisoners in line and even referred to one of his prisons as a concentration camp.

Trump is a warmonger, and seems to be chomping at the bit to start nuclear war with North Korea.   Rather than making us safer, he has made us more vulnerable to attack from both without and within.  His rallies are hate fests in which he emboldens white supremacists, Nazis, and hatred in general.   He has turned Americans against each other.

He has hired people who are dead set on destroying from within the departments they were hired to oversee:  education, the EPA, the Justice Department, and health and welfare.   Obamacare, which has helped many vulnerable people get health insurance for the first time, is now back on the chopping block.  Yes, again.     Trump and the more hardline members of the GOP are relentless in their cruelty and seem to like tormenting people with the constant threat of taking away their access to healthcare, not caring one iota how traumatizing the threat is.

After he was criticized for his cold response to the victims of Harvey, telling the people of Texas “Good luck,”  he made a lame attempt to show a little more fake empathy than usual after Irma.    He was probably ordered to do so, because it was obvious his “empathy” was forced.   Maddeningly, the mainstream media ate this up, speculating and theorizing that perhaps Trump was changing and he was capable of empathy after all.

But they are wrong.   Trump is not capable of empathy.  I wish the mainstream media would stop making excuses for him, because it’s a form of enabling.   Those of us who are familiar with his form of narcissism know that the more he is enabled, the worse he will become.   Trump is a malignant narcissist, and not only can’t he change, he will only grow worse over time.   The only remedy is for him (and the equally toxic people he has appointed) is to be removed as soon as possible.   What he has destroyed in eight months will take years to recover, if we can ever recover it.   Our beautiful country is already beginning to resemble a third world country or a dystopian nightmare.  Soon, people will begin to die of preventable diseases caused by contaminants that those pesky and “oppressive” regulations have helped keep at bay — and that’s just for starters.

Perhaps most heartbreaking of all, Trump has destroyed our unity as a country and our trust in each other.   That’s his intention, because a people who have been divided can be more easily conquered.  This is standard practice in all authoritarian regimes and dictatorships.

Donald Trump only knows how to do one thing well, and that is to destroy.  He despises anything beautiful, truthful, or good.

14 thoughts on “Trump hates anything beautiful, truthful, or good.”