Elizabeth Mika writes probing, fascinating, and, well, creepy posts about Trump’s malignant narcissism and the ways our narcissism as a nation inevitably led to an election of someone like him.   She also writes about the psychology of his most ardent followers, who seem eerily reminiscent of cult members.   This is a phenomenon she accurately dubs “Trumpism.”    When under the thrall of a cult leader, many people seem to forget their own morals and not have minds of their own.   They will continue to deny truth and support their leader even when there is irrefutable proof of the leader’s immorality and even criminality held up to their noses.

In fact, I believe Trumpism is a cult, and Trump qualifies as a cult leader. 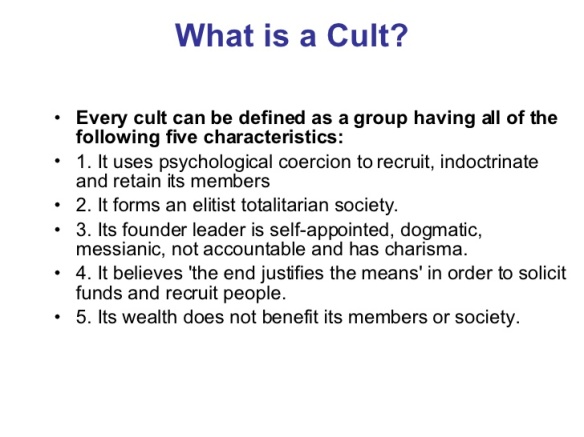 In Ms. Mika’s most recent post, she writes about this disturbing trend and the true intentions of the criminal mob who hijacked the White House in November.

Would you want to know ahead of time if your future president suffered from a dangerous, incurable character defect — not mental illness — that was typical for all tyrants in the history of human race?

What if that defect, with its predictable manifestations and consequences, was described to you early on, so you could perhaps help prevent the tyrant’s rise to power? Or, if too late for that, at least understood what to expect and pursue appropriate action as his reign took hold?

Would you want to know?

This knowledge is easily available, though for some reason we prefer not to find it, and that’s as our government, country, and the entire world come under threat from just such a characterologically defective leader and his circle of similarly impaired enablers.

Yet we don’t want to see it, and we loathe talking about it, even though, as Lee Siegal reminds us, avoiding questions about Trump’s mental unhealth is “a betrayal of the public trust, a denial of human nature, and an insult to posterity.”*

In a September 2016 post, The Red Herring of the Candidates’ (Physical) Health, I wrote:

If / when Trump is elected and proceeds to dismantle our democracy (yes, we know this is a very real possibility, thanks to correct diagnosis, as chaos and destruction are assured by his character defect; but he also said so, should there be any doubts), will we perhaps revisit and rethink the Goldwater Rule? If we have that chance, of course, and courage and a desire to do so.

The dismantling of our democracy is in full swing now and proceeds according to schedule.

Make no mistake: What we are witnessing is not some incompetent bumbling of political novices, but purposeful and vengeful destruction of our government, country, and possibly — if the pathocratic Trump/Bannon cabal is allowed to remain in power unopposed— the world.

I highly recommend Ms. Mika’s blog on Medium.  This is where hers and other’s articles on Trump, Trumpism, and the normalization of sociopathy/narcissism in general can be found.