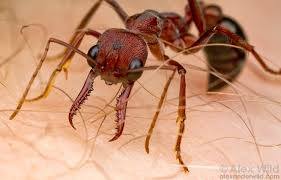 I’m hooked on a blog I found a couple of months ago called WaitbutWhy.   It’s a blog for people who like science and geeky stuff and think about the same kinds of weird, random, shower-thought sort of things that I do.    Some of the stuff its author, Tim Urban, writes about will absolutely blow your mind, such as this incredible article about how to fit all 7.3 billion people on the planet into a building that would fit in a space smaller than Manhattan’s Central Park.  Yes, it can actually be done (but it would be terribly cruel!).

Some of his posts are hilarious because they’re so true and relatable.   In my last post I mentioned that bugs (ants, to be specific) can be beneficial to the environment because they help break down dead material, but let’s be honest here — Do any of us really LIKE bugs?

They invite themselves where they are not wanted.  They walk on our food and spit in it and lay their nasty eggs in it.   They violate our bodies without our permission, sometimes painfully or causing unbearable fits of itching.   They hide inside our bedcovers and crawl all over us when we’re trying to sleep.  Some bugs have an unsettling way of flying in your face repeatedly.    They won’t take no for an answer.  They look like microscopic monsters or aliens from another planet.   Their nasty dead carcasses can be found all over your windowsills, your floors, in your bed, inside your refrigerator. They are stupid (moths fly straight into electric lights — how have they not gone extinct yet?).  Moths burrow inside your clothing and chew holes in them.  Roaches and mosquitoes carry diseases.   Termites can bring down your home (and during their horrifying spring swarms, they obnoxiously drop their wings after having sex — all over your hardwood floors.  (I know, because this happened to me — I spent two hours vacuuming them all up while crying and whimpering in terror).  I wrote about that awful experience in detail in this post about my weird phobia.  Here is an excerpt.

The worst experience I ever had with my phobia was the time we had a termite infestation. I was home alone at the time, watching TV in the living room and something made me look across the room. Something weird was happening on the hardwood floor. It looked like it was sort of…undulating. I got up to investigate and saw what appeared to be THOUSANDS of ant-like insects walking, flying, and DROPPING THEIR WINGS ALL OVER THE FLOOR. I started shivering and crying as I frantically went to go find the vacuum cleaner. I couldn’t think straight. Whimpering in terror, I had trouble plugging the damn thing into the wall because my hands were shaking so badly. In a panic, I sucked up every last one I could see, but MORE KEPT COMING OUT OF THE WALL. I didn’t know they were termites–I didn’t know about the “swarmers” (the termites who mate in the spring and have temporary wings until they mate) until Terminex told me that’s what those were. THOSE UNHOLY FLYING FAKE ANTS WERE HAVING SEX ALL OVER MY LIVING ROOM FLOOR!

Urban wrote a post about all these ways that bugs ruin everything, but what really stuck with me was his correct observation that —

They do, and maybe that’s why we hate them so much.  More than anything, I despise bugs (okay, I know technically most of them are insects, not true bugs) because they have zero sense of where you end and they begin.   Just like those predatory boundary-violating narcissists who make our lives a living hell and never seem to go away.

In a post I’ll write later tonight or tomorrow, I’m going to describe the wonderful day I had tubing on a local river yesterday.   Everything was perfect — except for the hundreds of dragonflies swarming and hovering everywhere, persistently landing on our bare skin.   Swarming all around us — and mating in the air while they did so!  Do you have no sense of modesty,  Mr. and Ms. Dragonfly? Having sex in public.   In the air.  No shame, those dragonflies.   They all have abominable boundaries! So maybe I’m just jealous, because having sex while flying seems like it would be heavenly!

I have nothing against dragonflies.  As far as insects go, they are generally pretty inoffensive.  Yes, they are big and kind of prehistoric looking (they scared the bejeebus out of me when I was younger).   The sight of their large outstretched transparent wings is slightly unsettling to me (though I have no idea why).  But I like them.   They don’t bite.  They eat mosquitoes and other annoying bugs that do bite.  They are also very pretty.   I have a love/hate relationship with dragonflies, and I guess the love wins out because I have a tattoo of one on my right shoulder.

I like dragonflies, but I like them from a distance and in limited numbers.  I don’t like swarms of them flying all around me, landing on me, and making love right in front of my face.

Good thing that didn’t happen when I was young, because I would have died from panic. Over the years, I overcame my phobia to the point where my feelings about dragonflies are mainly positive, although I’ve retained a bit of my old fear that snuck up on me yesterday when they were all around me and I couldn’t get away.  I dealt with it by pretending I was Spyro the Dragon with magical dragonflies protecting me.

16 thoughts on “Bugs have terrible boundaries.”