I was concerned because I hadn’t received a 2016 WordPress Year in Review as I did in 2014 and 2015. So I checked the Support forums and found out some bad news–WordPress is not doing those this year.  That makes me sad.  I was really looking forward to that, but it is what it is.

I decided to go ahead and compile my own review which will cover this blog’s most important stats for 2016. I’m following the same format that the automatically-generated annual reports did in the past, so without further ado, here is how Lucky Otters Haven performed in 2016. Of course this post is missing the fun fireworks and other digital doodads the generated reports always had.

Most of these are culled from the WordPress metrics page.

Busiest Day of the Year:

Longest Streak (posting every day without skipping a day):

As you can see, I tend to post the most in January and February (lots of time spent indoors!) and taper off in the fall (when my SAD kicks in).   Last year showed pretty much the same pattern.

As you can see, my narcissism and narcissistic abuse posts (I include posts about HSPs/empaths and the other personality disorders within this category because there’s so much overlap) continue to be the most popular BY FAR, even though lately I’ve been focusing on a lot of other related and unrelated topics.

The most popular non-narcissism (or related) posts in 2016:

Anyone Remember Merrimints? Well , They’re Back (sort of) is my most popular off-topic post.   This post is in 46th place, with 2,646 views, mostly referred here by foodie forums like Roadfood.com.

Where Did My Visitors Come From (Top Ten)?

Views Around the World: 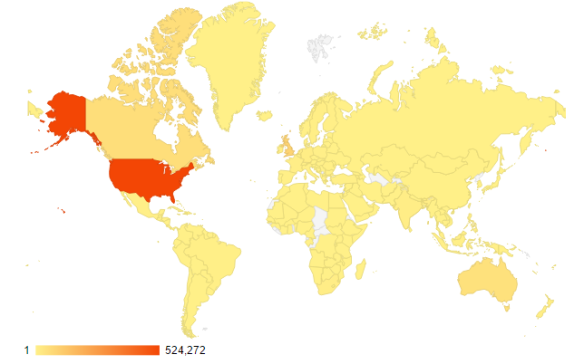 Top 5 People Commenting (not including me):

I have the Alexa toolbar, so I’ll throw this in too (Yeah, I know, Google Analytics is a lot better), but whatevs.

Lucky Otters Haven’s viewers are almost evenly split between male and female, with males having a slight edge.

The vast majority of Lucky Otters Haven’s readers have some college education, followed by readers with a college degree, and then those with graduate degrees.

Thank you to everyone who has made this blog what it is and continues to visit and comment!