It’s entirely possible to love your child, but not particularly like them, or at least not like the things they do. But my son has grown into an outstanding young man, and not only that, we share many of the same interests. He’s like a more extroverted version of me. We have the same sense of humor and basic philosophies about life. If I just met him on the street, I could see us being friends.

I was annoyed at work because it was taking too long to get done, and I wanted to be off early to spend some time with my son since he’s only here until Thursday morning. He kept himself busy while I was working though. He met up with his sister, who loaned him her car while he’s here (he didn’t have enough to rent a car) and they went to the mall, and then went back to her place and they hung out with her boyfriend (they are back together, sort of) and their dad (my ex). Apparently my ex mellowed quite a bit as far as our son goes, and I was happy to hear they had a nice conversation.

I finally arrived home about 3:30 and didn’t expect to see my son until late tonight, but within the hour he came in the house and announced, “I’m taking you out for a ride.” Okay, I thought. I put away the laptop and changed my clothes, and we got in the car and drove first to his old high school, which he wanted to see. He said it was weird seeing the old sights after so many years (he hasn’t lived here since 2010)

Then we drove into the funky, arty part of town which is filled with old hippies and young hipsters, musicians, consignment shops, unique hole in the wall stores of all kinds, craft beer bars (we live in the craft beer capital of the USA), and many little eateries, most which have areas where you can dine outside.

We walked up and down Haywood Road and just looked at the people and the shops. There’s always so much to see there. He took a lot of pictures using his new 35mm camera. He got a really cool photo of an old abandoned white church. Like me, he’s fascinated by abandoned buildings (I wonder what that says about us).

We finally were hungry, and decided to eat at one of the little eateries, a Tex-Mex and seafood establishment called, of all things, The Lucky Otter (which is the restaurant that inspired the name of this blog). I mean, I just had to eat there, having named my blog after it. I even got a picture of the sign! 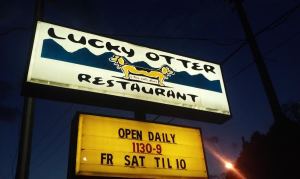 We sat outdoors as it grew dark. I had a bowl of chili with cheese and sour cream and a locally made orange-vanilla soda. He got a veggie-seafood burrito and the same kind of soda. The food was cheap and good, and a friendly black and white puppy from the next table came up to visit us. The puppy was adorable but hard to get a good picture of because she wouldn’t stop moving. I can’t get over the pale pink lacy bow tied on the back of her collar! I also got a couple of pictures of my son.

Later we stopped in a convenience store he used to frequent when he was about 12 or 13 and it’s completely changed–the laundromat that used to be there now sells craft beer and the design is much more up to date and includes organic foods along with the usual chips, candy and soda. Both of us are addicted to a locally made drink called Dr. Enuf, which is made in Tennessee and apparently can only be found in this area. We like the cherry kind with the ginseng and purchased one for each of us.

We drove back to my house where we looked through old picture albums and I found a box of his old CDs from the early 2000s filled with the nu-metal he used to love so much. I had no idea I still had them, and it was like Christmas morning for him as he looked at all these old CDs, which he’s bringing back to Florida with him.

Two years apart is way too long. I’m off for a week in July and we decided I’m going to drive down to Florida to see him and stay in his apartment while there, so my only expenses will be gas to get there and back, and a little spending money.

It was a good day. Tomorrow he’s taking his sister and me to see the animated film Zootopia. 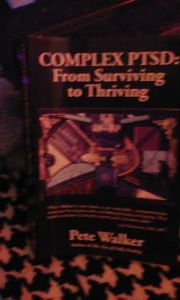 One last thing: I received my copy of Complex PTSD: From Surviving to Thriving by Pete Walker, which my good friend Linda Lee sent me as a gift. Thank you, Linda!