If you’ve been around here awhile, you may remember my “Progression of Spring” series, which I ran weekly from early March through early May. That series was a lot of fun for me, because spring is my favorite season. I love the way everything comes alive, the flowers are blooming, the days are getting warmer and longer, and the heavy winter clothing can finally be put away.

I don’t get as excited about Fall, because although it’s pretty (at least through early November or so), it depresses me. The days are growing shorter, the changes (to me) aren’t as spectacular as those in the spring (the changing colors–which are shortlived–just mean the leaves are about to die and fall to the ground to rot), and although the cooler temperatures are a relief after the hot days of summer, it also means the ice and snow aren’t far behind. You may have guessed I’m not a big fan of winter.

I do like Halloween and Thanksgiving, but the string of holidays during the Fall (including the ridiculously overblown and overcommercialized Christmas season), fail to bring that much cheer to the depressing, gloomy, cold chill of late fall with all its monotonous dark browns and gray overcast skies and long freezing nights.

All that being said, autumn is still pretty, so I decided to start a Progression of Autumn series. This is the first installment. Maybe by doing this, I’ll start to appreciate it more!

This year has been a strange one: Fall came early. I started noticing the trees changing colors as early as mid-August. Obviously this wasn’t due to cool temperatures since it’s still swelteringly hot, but probably having such a dry summer that stressed the trees.

So this is the first set of photos I took for this series, which I’ll try to continue each week until things start to look like winter again (ugh). 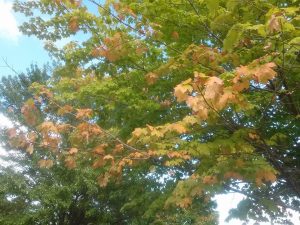 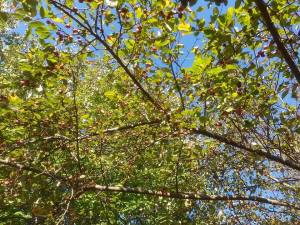 Crabapples on these trees! 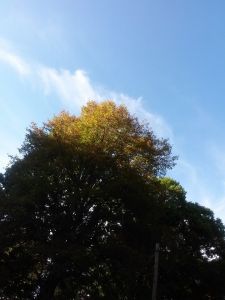