Alaina, a frequent commenter on this blog, said she almost named her blog “I Write So My Head Won’t Explode” but decided it was too stupid to be a blog name.

I think it’s great. So great I decided to write an article with that name. It’s great because it’s the truth. If I didn’t have this blog and wasn’t able to write every day about the good, the bad, and the ugly, I think I would have gone insane by now.

Writers are by nature people with issues. We have mental problems. That’s why we write. If we didn’t write, we’d be drinking, drugging, sleeping all day or stuffing our faces with junk food, or engaging in any number of other unhealthy and self-destructive activities. I know I did until I started writing. 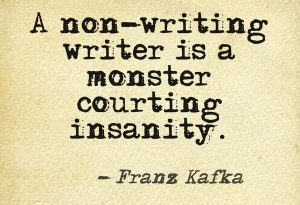 If you can write, you are blessed. If you enjoy and are good at any creative endeavor (writing, art, acting, singing, dancing, etc.) that can add something useful, entertaining, educational or beautiful to the world and at the same time provide an outlet for your deepest, most painful or confusing emotions, for the love of God, use your God-given gift.

Writing is my safety valve. It’s something I love doing that isn’t going to destroy my mind or my body. But it’s a discipline too. Sometimes I have to force myself to write, even when I don’t want to. I’m always glad I did.

As ACONs and survivors of narcissistic abuse, we also have a calling and a responsibility to educate others about what we have experienced. Nothing happens for no reason. We were given the lives we were given as an education so we could help others. Part of our responsibility as narcissism bloggers is exposing the N’s of the world who have nothing but ill will for other human beings–and we do that through writing.

Since my daughter moved out Tuesday night, I’ve been more depressed than usual. In fact, I haven’t been this depressed in over a year. It’s not so much because she’s not here(though I do miss her), but that she lied to me when she was leaving. I confronted her about the lie yesterday–she told me her grandfather had sent her birthday money in a card, when he actually did not because I called him and asked–and she explained it was a bluff because she thought maybe I had stolen it and was possibly trying to get money out of me (playing on my “guilt” for having “stolen” it).

I felt betrayed and hurt by her lack of trust in me as well as her lying to me in such a mean spirited way. It’s been bothering me since it happened. It made me worry that she may really be a narcissist and not a borderline at all. I started thinking maybe she was diagnosed with BPD so her insurance would pay for her treatment (I don’t think NPD is covered by most insurance companies). I really don’t want my daughter to have NPD. It’s a painful and horrible thing to face–that your own kid who you love more than anything in the universe, may be a narc. I’d rather believe she has BPD. Maybe that’s all it is. I hope.

Yesterday I didn’t even go to work, I was so depressed about all this. I lay in bed sleeping most of the day instead, which is what I do when I’m depressed. Of course that just made me feel even worse. I didn’t want to write, I just wanted to sleep and feel sorry for myself.

But I also felt like pressure was building up in my head and that if I didn’t write, my brain might explode. So I forced myself to write, and I did feel a lot better–I no longer feel stressed to the point that I think I have to wear a head truss to to keep it in one piece.

18 thoughts on “I write so my head won’t explode.”