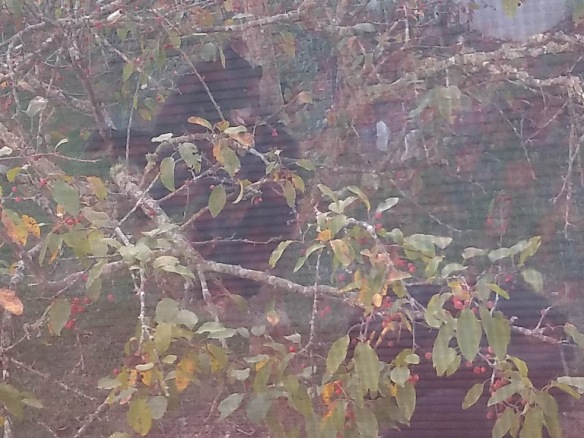 Mama bear seems to call to her cubs down on the ground.

I was at a neighbor’s house, and suddenly, we witnessed four black bears emerging from the woods in the back of their yard: a mother and her three adolescent cubs.  Black bears are not very large, not terribly aggressive, and will usually avoid humans, although they do have a reputation for living near humans, because of easy access to trashcans and the smell of cooking food.   Many homeowners around here chain down the lids of their trashcans or even lock them.   Raccoons are also a problem.

Black bears are very common in the western North Carolina mountains, and are especially easy to spot in the fall, since they are out foraging for food before winter sets in.  They are not endangered here because many people are so entranced with them, they actually leave out food to attract them.

On this day,  my neighbor and I could see them lumbering closer until they finally stopped under a berry tree almost directly under the second floor window we were looking out of.  Mama was the first to climb up the tree (the bears’ agility is amazing for their size and shape), and she seemed to “call” to her cubs to come get some berries.  The cubs seemed pretty content to graze on the ground looking for berries that had dropped there, although one did attempt to climb up there with Mom, but wasn’t too successful at it.

After the bears ate their fill, they lumbered off across a field into another part of the woods.

I wish the pictures were clearer, but at least we were pretty close! 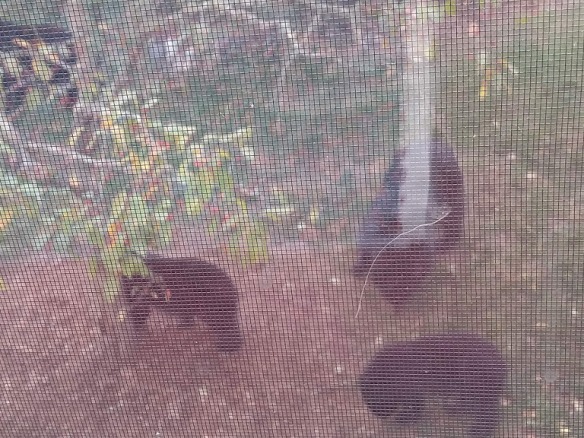 6 thoughts on “A visit from a bear family.”