I think it’s relevant to post this again, since we spend so much time online these days. These are trolls that hide in the shadows. Be on guard against them.

In two earlier posts I wrote about online bullies and trolls (not exactly the same thing, but close enough). I won’t explain here how they differ and are the same (you can read the articles which I’ve posted links at the end of this article), but I neglected to mention stealth trolls. Stealth trolls seem benign, but can wreak havoc on web forums and social media. I will describe two types of stealth trolls. There are probably others. 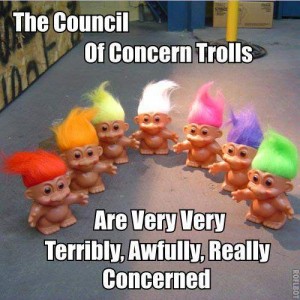 The Urban Dictionary defines a concern troll as:

A person who posts on a blog thread, in the guise of “concern,” to disrupt dialogue or undermine morale by pointing out that posters and/or the site may be getting themselves in trouble, usually with an authority or power. They point out problems that don’t really exist. The intent is to derail, stifle, control, the dialogue. It is viewed as insincere…