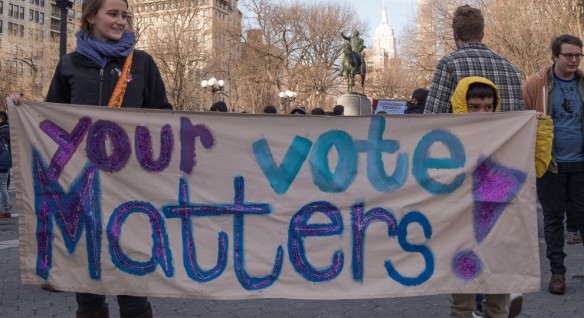 I’m condensing and editing this from a Twitter thread I wrote the day after the midterm elections.

Now that the midterms are finally over (although they aren’t really:  there are still votes coming in in some places, and there may even be recounts in states like Florida and Georgia),  my biggest takeaway is this: we can never, ever take democracy for granted.  We can’t assume it’s a gift that once given, just stays.

Because that is not the way democracy works.   It must be constantly maintained, not by politicians, not by pundits on TV, not by activists.  It must be maintained by regular people like you and me.  Unfortunately, for many years, we took democracy for granted and thought we could stay uninvolved in politics and let others do the hard work.  But once a large percentage of the population ceases to care to the point that they don’t even vote,  democracy is in trouble.   The very term democracy indicates that its existence depends on The People.   It depends on us.

Republicans were able to seize so much power because we let them.  Although other factors played a part in Trump winning, in 2016, we didn’t turn out in sufficient numbers at the polls to overcome everything that was stacked against us.   But those things were never insurmountable.   There are just too many of us.   Yes, Hillary won the popular vote (and I’m one of those people who think the electoral college should be abolished), Russians may well have influenced the results, gerrymandering and voter suppression  in some states is out of control, etc.  But, in spite of all the obstacles the GOP tried to set against us, the results in 2016 were still close.   Had we all voted (and not voted for third party candidates like Jill Stein), Trump would have lost and instead of becoming POTUS, today he’d be just another washed up and forgotten reality TV star who once ran for president.

But he is president, and now that we are stuck with him (for now), we are all learning an extremely sobering lesson in just how fragile democracy is, and just how easily one despotic man with too much power can start to dismantle all our checks and balances, and destroy democracy itself.   Many Americans, including myself, used to think about Nazi Germany and wonder how it could have happened.    We are now seeing in real time how it happened:  specifically, how seemingly normal people could come to support a murderous fascist tyrant.

We woke up, perhaps at one minute before midnight, but still not too late to flip Congress back to Democratic rule, which will mean there will be some vital checks put back on this presidency.  As a result, Trump, though he will still rage and threaten and bully the free press, our institutions, and everyone he doesn’t like, won’t be able to push through his tyrannical and cruel policies the way he has been able to over the past two years.  We will be able to relax just a little.  But we can never again become complacent.

Were it not for the efforts of the Resistance, and even more importantly,  regular folks of all races, creeds, religions, income levels, and lifestyles, turning out in record numbers to vote (many voting for the first time because they realized democracy itself was on the line) and had this election drawn a tepid turnout like other recent elections, we would have lost the House.   Instead of feeling hopeful and relieved, we’d be staring down into a black abyss of unfettered tyranny right now.

Had we lost, we would now be freefalling into fascism and Trump would have unchecked power, free to do anything he wanted to do. We would have lost our democracy and would soon become a dictatorship.

Things are far from perfect. We still have a heavily Republican Senate and a Judiciary that is moving further to the right and will most likely continue to do so as long as Trump retains the presidency.  But the good news is, Trump can no longer just do anything he wants, and he can’t break the law, because the new Congress will hold him accountable if he does.  The Russia investigation will continue, and the new Congress will make sure Trump doesn’t get to run away from or obstruct justice, unlike our current GOP Congress, which enables his crimes and lack of ethics.  He can also be forced to show his tax returns.  So even though Republicans are still top heavy in the Trump White House, we are in much better shape than we were before the election. Trump can scream and toss insults and threatens all he wants, but at the end of the day, he simply  won’t be able to get much done.

A Democratic Congress can also start impeachment proceedings. Before last night, Democrats had no power to do anything. The only power we had was our vote. And we exercised it in record numbers. Had it not been for us using that hard won right, and sitting at home, democracy would have died.

We’re not out of the woods yet though.   This isn’t over.  We still have a lot more work left to to do. Trump has done incredible damage which may take generations to repair.  Republicans (which has become a fascist party since Trump) still have too much power. But we, the People, took back some of that power with our votes, and that is a good beginning.

I hope we all learned a lesson that democracy takes WORK.  We have the right to vote, and we need to use it — or possibly lose it!   Losing our right to vote can happen much more easily than you think.  There are people in high levels in government that would love nothing more than to take away our right to vote.   We can never assume others will do the work of democracy for us. The responsibility falls on us.  A government run by the People requires the input of the People.   There’s no way around it.   Voting in record numbers is essential.

If we continue to vote in the kinds of numbers we had on Election Night, we can eventually overturn this entire sorry regime  and finally have the kind of inclusive, compassionate, prosperous, caring, honest, and fair government WE, not the oligarchs and religious extremists, want: one that works for the People, not just the ultra rich and corporations.

If you voted, you should feel proud that you helped to save democracy. I think last night proved that no amount of voter suppression or GOP cheating is enough to overcome huge numbers of people voting.

We still have a long road ahead of us and a country to save.  Let’s get going!

10 thoughts on “My biggest takeaway from the midterm election.”