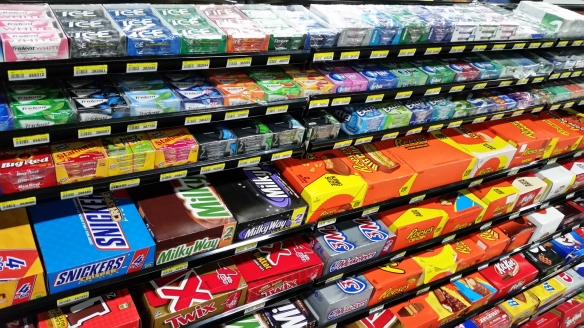 American commercial candy is bad, and in recent years it’s gotten a lot worse.   Maybe my standards are too high — I’ve had European chocolate, gourmet chocolate made by independent candymakers, and marzipan, which is popular in many parts of Europe but just never caught on with American tastebuds (American cakemakers, for example, seem to stick with horrible, overly sweet, rubbery fondant as a cake covering instead, when marzipan tastes a lot better and works just as well as a pliable covering).

So go ahead, feel free to call me a coastal elite or a food snob, but when it comes to candy, I really think American candy companies target the lowest common denominator and as a result, most of it is terrible, barely even edible.  This is comparable to so many other things in America, like our shallow infotainment reality-show “documentaries” (compare ours to BBC’s documentaries, which actually educate and still entertain), our big-special-effects-but-no-substance “blockbuster” movies that entertain but have no real meat or meaning, and are populated with comic book cardboard characters without real depth.

American candy years ago used to be better.  At least it was made with real sugar and other real ingredients, and the variety of types of candy bars was better.   The strictly-for-kids candy (Garbage Pail Kids, Nerds, Runts, gummy worms, and the like) that is usually kept on the bottom shelf of most convenience stores, has always been terrible, but that’s okay since it isn’t marketed to adults.  Kids love that shit.  I did too.  Hell, I still do when it comes to gummy bears and SweetTarts.   I even like some of that cheap bagged candy that hangs from hooks and is sold at 2 for $1.00 or whatever.  The lemon drops are great and I have a soft spot for circus peanuts, spice drops, and orange slices.   What I like about it is it never pretends to be anything other than what it is — cheap candy marketed to kids and sometimes old people who feel nostalgic for the penny candy of their youth (Starlight candies and butterscotch disks are good examples of the latter) — and it’s priced accordingly.

No, here I’m talking about mass marketed brand-name candy that’s usually covered in chocolate (most always milk chocolate), that gets displayed on the eye-level store shelves where you can’t miss it.  Seriously, 90% of that candy is inedible.  Here’s my list of gripes.

Now I love me some Reeses Peanut Butter Cups — as long as they are fresh.   When fresh, they’re pure ambrosia.  I could eat a whole case of them.   But more often than not, when you tear open the wrapper of your Reeses, you find a dried up hockey puck that looks grainy and splotchy and has that greyish-white cast to it (I found out that stuff isn’t mold or anything bad, it just means the fat/cocoa butter has separated from the sugar and the sugar has risen to the top, but it still makes the cup taste terrible).  If you bite into it when it’s like that, the peanut butter is like sand and has absolutely no flavor.   I’ve wound up throwing the cup away when it’s like that because they taste so gross.

Reading the expiration dates doesn’t work because they are indecipherable and in some sort of code instead of actual dates we can understand.  So you take your chances.   Maybe they need to use a cellophane wrapper so you can see the actual cup through it before you waste your money on something you may or may not be able to eat.

Some people who have noticed this problem think Reeses changed its formula to save money, but I actually think it’s a storage issue, since occasionally you do get a fresh Reeses and they taste as delicious as the ones I had as a kid.   I think when the temperature gets too hot, they partially melt, leaching the cup of some of the peanut oil, which leaks out and leaves the peanut butter filling sandlike.

Here’s an open letter from a customer asking H.B. Reese what the hell happened to their cups that makes most of them taste like sand.

Fifth Avenue (on the left) wins, hands down.  Apparently, most Americans prefer the neon-orange sickly-sweet Butterfinger (on the right).

Way back in the day, Clark bars were a thing.  So were Fifth Avenue bars, which were my absolute favorite for many years.   I always loved the Fifth Avenue for its thick rich (real) chocolate coating which enrobed a peanuty, vaguely molasses-flavored honeycomb-type of candy filling that made a satisfying snap when you bit into it.  It was vaguely salty and not too sweet.   Eating one was pure heaven.   Clark bars were good too, though not in the same ballpark as Fifth Avenue.  They lacked that molasses taste and the chocolate coating was thinner.

Now I can’t find them.  I’ve looked everywhere to find one, and all I can find is  Butterfinger bars, which are filled with a sickeningly sweet hard-candy filling that tastes like dried up peanut butter corn syrup with added neon orange color.  There is no molasses flavor whatsoever.   The chocolatey coating tastes waxy.  Reeses Crispy Crunchy bars are almost as bad, saved from their overwhelming sweetness by an overly-generous covering of ground peanuts.  The chocolate coating is okay.  I’m not a big fan.  Bring back Fifth Avenue!

The American obsession with gooey fillings. 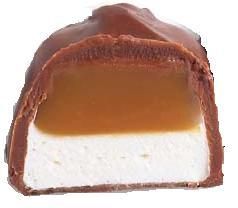 I’m not a big fan of caramel.   It tastes good in cakes (and caramel frosting is to die for), but it’s ubiquitous in American candy and is way too sweet.   To make matters worse, the “caramel” in commercial American candy bars just isn’t very good.  It taste fake and is way too chewy and nougaty.   Real caramel should be thinner and more viscous, like the caramel in higher end chocolates.   I’m not a fan of gooey, chewy fillings in general, whether it’s caramel, nougat, or (ugh) marshmallow.   I was never a big fan of Snickers, which are the most popular American candy, I think (maybe Reeses has beat them now).   I never understood their appeal.  They’re too gooey, too sweet, the chocolate coating is bland, and I’m not a big fan of the nuts either.

Years ago, when they were introduced here in America, I thought I might like the Cadbury Creme Egg, because Cadbury is an English candy and being the Eurocandy snob that I am, I thought it might taste better than American chocolate, but alas, I was wrong.   Cadbury, in my opinion, is terrible — too sweet, too milky, and not chocolaty enough.  Not that Hershey’s is any better  (at least Cadbury avoids that sour-milk aftertaste).   They are both bad in different ways.  And the fondant filling in the egg is just plain gross.  It looks disgusting, just like raw egg, and it’s sweeter than eating a bowl of sugar cubes covered in maple syrup.  After eating half of one of those things, I threw it out and never ate another.

Marshmallow Peeps?  No, thanks.

Overrated.  I have nothing more to say about these.   They’re probably considered “kids’ candy” but are usually sold with the holiday candy and other stuff marketed to the grownups, so I’m including them here.    I suppose they’d look cute as a decoration on cakes or something. 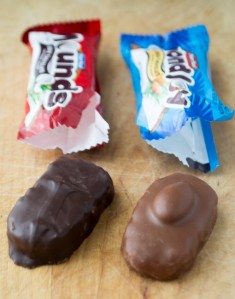 Mounds are actually good.  Not as good as Bounty bars, a British brand which was discontinued here back in the ’90s, but still good.  Their real dark chocolate coating is smooth and intense, and the coconut filling is sweet but not too sweet, moist but not too moist.

Spare me the Almond Joys though.  Two sad, runtlike almonds pressed on top of milk chocolate so bland it tastes like Nesquick.  Also, coconut filling does NOT go with milk chocolate.  Such a sweet filling needs the contrast of the less sugary dark chocolate.

The American obsession with Pretzel fillings.

Pretzels don’t belong inside a chocolate bar.  I don’t like pretzels much to begin with — it’s basically stale bread.   I do not want pieces of stale bread in my candy bar or as a filling in my M&Ms (what the HELL were they thinking?)  But it seems like every new candy bar made has pretzels in it.  It’s the candy version of Pumpkin Spice!   Hell, there are probably Pumpkin Spice flavored Pretzel candies.  Please make both these awful trends stop.

Milk chocolate can be good if it’s made well (usually European though Dove Milk is good too), but for the most part, American milk chocolate is bland, too sweet, and often grainy.   Dark chocolate is generally much better, and is finally gaining some traction here due to its health benefits so it’s being used more often in commercial candy, but milk chocolate still dominates.

I do like the chocolate bars you can find in the high-end candy section of the grocery store (usually found in the baking isle) such as Ghirardelli and I do love the sea-salt/dark chocolate trend.    I’m still a sucker for plain M&Ms (without the weird fillings), York Peppermint Patties, Mounds, dark chocolate Kit Kat bars, and fresh Reeses Peanut Butter Cups.  But on the whole, American commercial candy is just not very good, and seems as dumbed down and cheaply made as so many other things in America.

18 thoughts on “The dumbing down of American candy.”