A scene from the new Roseanne showing pro-Trump Roseanne with her anti-Trump liberal sister Jackie.

Roseanne was one of my favorite TV sitcoms back in the day (I watched the entire series from 1988 through 1997, when it was cancelled).    It was one of the most genuinely funny shows on television, because the characters were so relatable and realistic.  Roseanne and her husband were both overweight and had health and money problems like normal people.   Their house didn’t look like a page from Architectural Digest or even Decorating on a Budget.   It looked like the sort of home most of the people I knew lived in — messy, cluttered, out of date, with lots of kitschy objects, piles of paper and magazines, and unwashed dishes and other debris lying around.   The Conners were working class — at least until they won the lottery (that’s when the show began to go downhill and become unrealistic).   They struggled with bills.   Roseanne wasn’t always nice to her kids or her husband, Dan — and the kids were far from perfect.  They talked back and could be disrespectful.  But the love between all the Conner family members always came through anyway.   I particularly loved the Darlene character — played by Sara Gilbert — who was every bit as sarcastic as her mother but still had a huge heart. 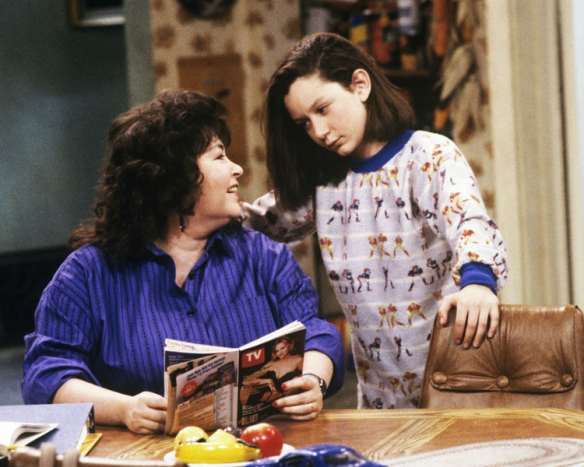 Roseanne and Darlene in the original series.

I did not watch the first episode of the Roseanne reboot when it aired last Tuesday night.    I passed on it out of principle.  Most of my anti-Trump friends have boycotted Roseanne and refuse to watch her new show, even if they were once fans.  I knew that Roseanne Barr, who used to identify as a member of the Green Party and had very left wing views back during her series’ original run, is today a vocal supporter of Trump.  Worse than that, she’s also all-in on one of the worst conspiracy theories many Trump supporters have embraced (a guy who calls himself “Q” and sells himself as some sort of pro-Trump prophet has many faithful believers).  Right now, there’s also a picture of Roseanne circulating (taken in 2009) that shows her posing dressed as Hitler and holding a pan full of “burnt Jew” cookies (Roseanne is herself Jewish).

But I have to admit I’m really curious about the new series.   I’ve seen a few clips.  It intrigues me that Barr has chosen to focus on a family that is divided because of politics.   It’s an interesting premise for a sitcom.   Roseanne’s anti-Trump sister Jackie (Laurie Metcalf) is back, all decked out in a pink pussy hat.  Her daughter Darlene, a lesbian in real life, is also an anti-Trumper on the show.   Harris, the premature daughter Darlene gave birth to at the end of the first series, is now a teenager and looks uncannily like her mother.   I’m curious about their relationship.   I wonder what sort of mom Darlene turned out to be.  I’d like to see the way they play off each other.

So I think I will give the show a chance even if it makes some of my anti-Trump friends mad at me.  Sure, it bugs me that Roseanne is a Trump supporter, and I don’t like some of the things she says and does,  but I feel like I have to be my own judge and at least watch one full episode.  The fact that all the original cast members have returned for the reboot series makes me feel like these people like Roseanne as a person — in spite of their politics mostly being different from hers.   So she can’t be all that bad — right?   If she were that bad, wouldn’t they have refused to return?

If I see that Barr gives the “other side” a fair shake, and it looks to me like the pro-Trump/anti-Trump conflict is played for comedy and/or for insight into the tribalism so prevalent in these history-making and tumultuous times, then that’s a good thing and I may choose to continue watching.   We could all benefit by laughing at ourselves and each other.   Better yet if Roseanne has the self awareness to see the humor of her rabid Trump support and can laugh at herself.

If, on the other hand, I feel like I’m being preached at or the show is really serving as a vehicle to peddle pro-Trump propaganda, then I will turn off the channel and never think about it again.   I want to be my own judge, not just boycott the show because other people are doing it or because it’s politically incorrect for a “woke” person to watch it.  Hell, the old Roseanne was funny!   I have to see for myself whether or not she can still be funny (even if she loves Trump) or if she completely lost her ability to make me laugh after she drank the Trump Koolaid.

If anyone has already seen the episode, please comment on your impressions of it.

27 thoughts on “Roseanne: to watch or not to watch?”