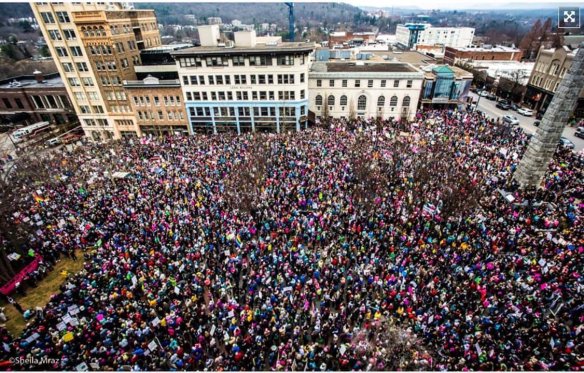 I wasn’t able to attend the Womens March that took place in downtown Asheville today, but the day was beautiful (sunny, high 50’s) and the turnout was unbelievable!  My jaw dropped to the floor when I saw this photo (which I was informed later is actually from 2017, but the turnout was the same or even greater than last year’s).

Asheville is a very progressive (deep, deep indigo blue!) bastion in a mostly red state (though a lot of the “redness” is misleading, since the GOP gerrymandering here is the worst in the nation.  There are actually quite a few blue/Democratic areas in North Carolina, particularly in the urban areas.

But I’m fortunate to live in what is probably the most politically progressive city in the state, outside of the Raleigh/Durham/Chapel Hill area, which is full of colleges and universities.   Asheville has a couple of colleges, but higher education isn’t its main draw.  We’re a haven for artists, musicians, people involved in the healing arts, and other creative types, and people from other areas of the country seeking the vibrant culture here as well as the beautiful scenery and the weather — we have all 4 seasons, but the winters are generally milder than what you find farther north and the summers are not that hot because of our location in the mountains.

The turnout in this small city (population about 89,000) was incredible.   It might as well have been in a big city like New York or Chicago!

Beautiful weather, beautiful city, beautiful people.   I’m proud to live in Asheville even though I wasn’t able to attend the march today.    I’m thrilled that the resistance seems to be growing even after a year of Trump, and proud of my fellow Ashevillians.